Speed. Breathtaking, high-velocity delivery is an even more decisive element in farce than mistaken identities or slamming doors. The world premiere of Brian Parks’ The House at Ithaca’s Kitchen Theatre Company runs a bit more than 90 minutes without intermission, but if its four leads spoke at the rate of characters in, say, a Eugene O’Neill play, the running time would be more than twice as long. And there might be as many giggles as there are in O’Neill.

Instead, under the inspired direction of Margarett Perry, four actors have inhaled helium and run with it. And despite the zigs and zags of a barely discernible plot, they never run out of gas.

At the beginning of the action, a middle-aged couple, dentist Martyn Redmond (Matthew Boston) and his homemaker wife Shanny (Elizabeth Meadows Rouse), have just sold the suburban residence they have owned for 20 years to a couple of young professionals, financier Fischer Libett (Matthew Bretschneider) and lawyer Lindsay (Dana Berger). In the somewhat bland living room of the house, both sides are smiling and seem eager to please. 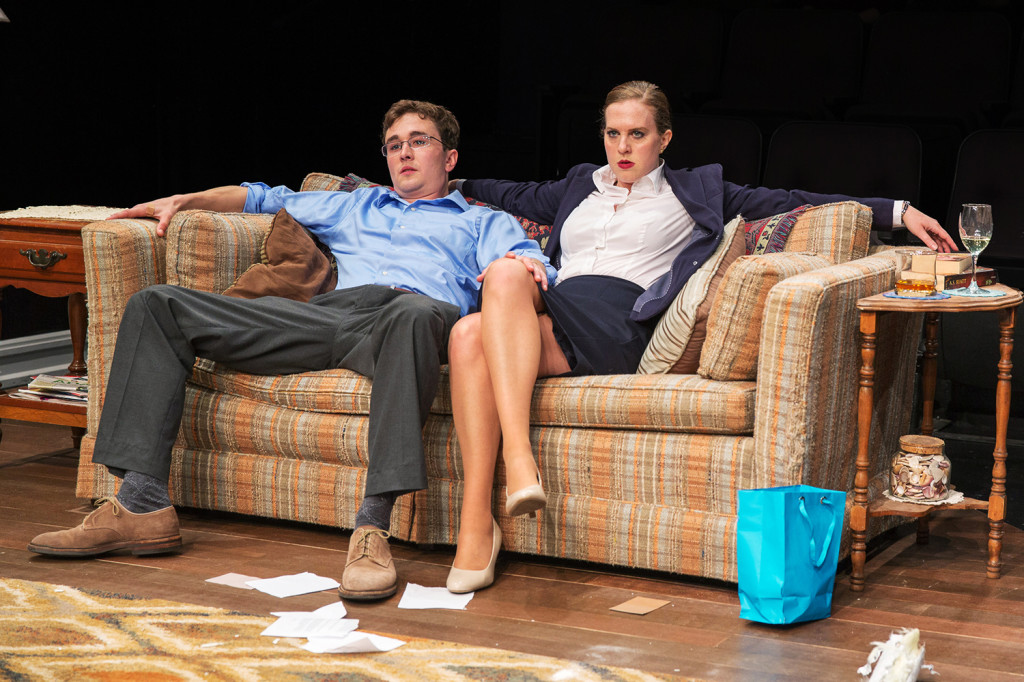 We do notice however, thanks to Lisa Boquist’s costume designs, that the two sides have different visions of themselves and different expectations. The older Redmonds appear more casual. Martyn is wearing slippers, and much of their talk is about family. The Libetts are not only more formally dressed, but unusually self-possessed and self-confident. They are paying cash for the house to avoid the expense and bother of a mortgage.

Trouble begins unexpectedly in some of the most innocent dialogue, as when the Redmonds say they don’t feel they’re actually selling the house as much as marrying it off. Indeed, and that’s why they care so much about their darling, in which they have put so much of themselves.

Tension rises slowly and can be shushed aside as the four characters reveal more of themselves. Like characters in Eugene Ionesco’s middle-class comedies such as The Bald Soprano, Parks’ characters lack the filter that prevents them from saying what might be on their minds but they should not reveal. This is especially true when it comes to lust or implicit cruelty. Speaking man-to-man, Fischer teases Martyn about the forbidden delight of putting his hands into the mouths of beautiful women. The dentist replies ruefully, “Ah, the pretty ones: They’re always the grinders.”

Parks likes to link the candid, damaging admission with non-sequitur. Lindsay picks up a portrait of the Redmonds’ absent daughter in baccalaureate robes, and coos admiringly, “That’s so wonderful: Her graduating from college while suffering with Down’s syndrome.” Shocked, the parents respond that their daughter does not suffer from such an ailment, although Martyn adds compensatively, “But she’s a lesbian.”

For all of the young Libetts’ worries and concerns, it is the elder Redmonds who have seller’s remorse. What are these young twits going to do in desecrating this moment to their love and labor? Paint the gray walls bright red? Knock out the kitchen walls and destroy Shanny’s garden? Dig up the grave of the family dog Murphy? Such sacrilege calls for holy war.

Kitchen resident director Margarett Perry discovered The House and brought it to Ithaca. It may have reminded her of the madcap pacing of playwright Brian Dykstra (Clean Alternatives, A Play on Words), with whom she is associated. She also pulled up four veterans of her previous shows, some of them running against previous type.

Matthew Boston, a frequent Dykstra sparring partner, runs riot with lines that don’t look promising when copied in a reviewer’s notebooks. Dana Berger (Lindsay) and Matthew Bretschneider (Fischer) were both aspiring creative students in last spring’s Seminar, groveling for the approval of the tyrannical master. Here they’re cocky as hell, with Lindsay a harridan of ambition. Most transformed is Elizabeth Meadows Rouse, last seen as the dreadnaught title character in Mrs. Mannerly (July 2012). Her timing is still perfect, but now she’s a loopy vision of domesticity, like Harriet Nelson crossed with Gracie Allen.

Playwright Brian Parks might be unfamiliar to local playgoers, but his works, often noted for their quick-wittedness, have been produced all over the United States and in Europe. His Americana Absurdum won a First award at the Edinburgh Fringe Festival and later helped to establish the New York International Fringe Festival. This Kitchen performance is officially the play’s world premiere, but nearly simultaneously it is being produced in Frankfurt, Germany, under the title Das Haus, in a translation by John von Düffel.