It has been years since Karen Savoca and Pete Heitzman performed locally on a regular basis, yet recognition of their names has not dwindled among Syracuse fans. The powerful soul duo, born from weekly gigs at the Westcott Nation, has become one of the most revered collaborations in Central New York music. Longtime admirers can enjoy the twosome’s tunes during a Folkus Project concert on Friday, Nov. 21, at the May Memorial Unitarian Universalist Society.

“It’s always fun when we play at home,” Savoca says from her Madison County residence. “It’s a great time and people are very energetic. It’s like a musical family reunion.” 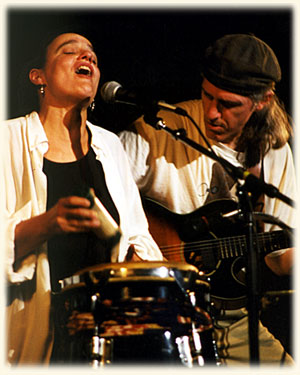 Savoca, born and raised in northern New Jersey, was musical at a very young age according to her baby diary (“20 months, knows six songs”). The musical gene came from her mother, a big-band singer and vocalist on a television show. Savoca began early on piano, then learned guitar and percussion. When she was 13, her family moved to a mountain top in upstate New York, providing plenty of lyrical inspiration.

She attended Syracuse University’s Crouse College of Music and eventually crossed paths with Heitzman, a premier guitarist of the area at the time. Although Heitzman had been touring with various rock and country bands, it was on a trip home to Syracuse from Atlanta that he met Savoca at a gig. The chemistry sparked immediately.

“It was instantaneous,” Savoca remembers. “Pete sat in with us all night and it was so great I think he joined the band the next day. He went back to Atlanta, packed up and came back to Syracuse.”

The pair’s popularity increased thanks to their participation in the Mind’s Eye, a band featuring a rotating cast of some of the best musicians in Syracuse. For seven years the group had a Monday-night residency at the Orange Grove on Westcott Street, all the while spotlighting Savoca’s original material.

The duo eventually split from the larger entity, however. “We wanted to tour,” she explains, “and a couple guys in the band weren’t able to leave town. They had families, jobs; they didn’t want to go much further than an hour or so away. We thought, ‘Well, let’s try to pare it down to you and I and see how it goes,’ out of the desire to get further away from home and travel more.

“It was scary at first,” Savoca continues. “Both of us were used to having a four- or five-piece, sometimes six, playing together. It was challenging: a lot more space, air, silence. But as we did it more, we really came to love it. Now even though we love playing with other people and other people often want to play with us, we love getting out there with just the two of us. It’s become our sound now.”

That sound is one of strength and sensitivity, guitar flexibility and rhythmic versatility. “As a singer, I’m used to arrangements now where I can stretch, breathe,” Savoca says. “There’s a lot more to contend with every person you add. A whole other layer is added with each player. What will they add? The space is effective.”

The musical tandem has released eight albums since 1988, produced two albums and worked on film scores and compilations. They do additional recording work and still tour throughout the year, keeping busy schedules yet also achieving a delicate and necessary balance.

“We’re pickier now,” Savoca says. “We’ve been doing this for a long time, 16 years. We choose where we want to go. ‘We go where the love is,’ Pete says. We’re really lucky that we have found great pockets across the country. We do well and people come out. We keep ourselves busy enough, but not so busy we’re absolutely exhausted and don’t see our friends. We did that and it gets very tiring.”

Savoca is clearly looking forward to this weekend’s local gig. “We’ve been playing together since 1980 and people here have been seeing us for that long,” she says. “It’s pretty special. And four generations of Pete’s family come out now, from his 95-year-old mother to his 5-year-old niece’s kids and loads of cousins. It’s pretty cool and people always say they leave happier than they came.”

The pair will also open for the Salt City Waltz on Saturday, Nov. 29, 8 p.m., at Eastwood’s Palace Theatre. Visit upstateshows.com.