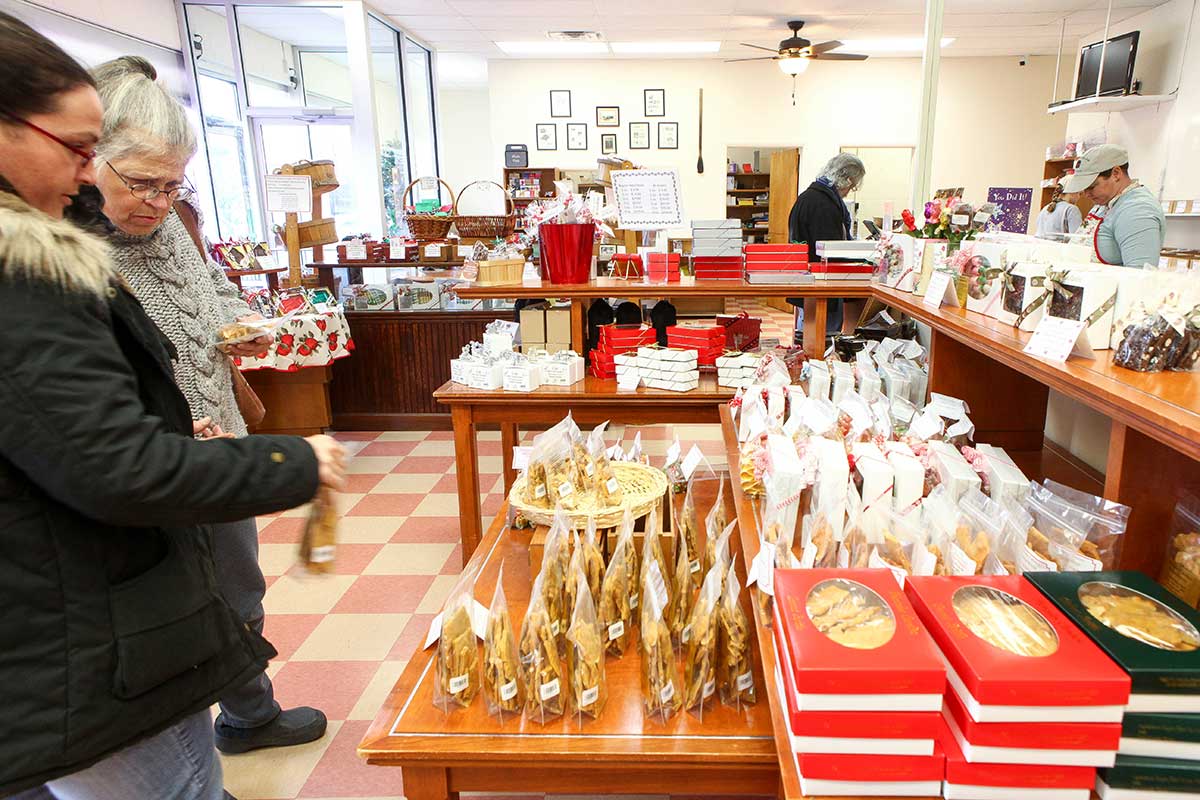 Christmas came early this year for Terry and Steve Andrianos. In September, they moved their Hercules Candy Co. out of its longtime home on West Heman Street in East Syracuse to spacious new quarters at 720 W. Manlius St., on the village’s main thoroughfare.

The new storefront gives them several things they needed: greater visibility and more room for candy production, packaging and shipping. The Heman Street site, at 1,600 square feet over two floors, had felt cramped for some time.

“We more than doubled in size,” Terry Andrianos says, “and sometimes it feels like it’s not enough. We’re really excited to be here.”

Thanks to the growing popularity of the Hercules Candy Co. YouTube channel, the Andrianos have seen a dramatic increase in online orders. Son Craig Andrianos launched the channel several years ago and it now has more than 207,000 subscribers. Viewers tune in to see the family chat, discuss the history of the business, joke around and, of course, make candy. Because Craig is behind the camera, everyone is at ease.

“We’re just ourselves,” Terry says. “You’re watching us work and having some fun, too.” 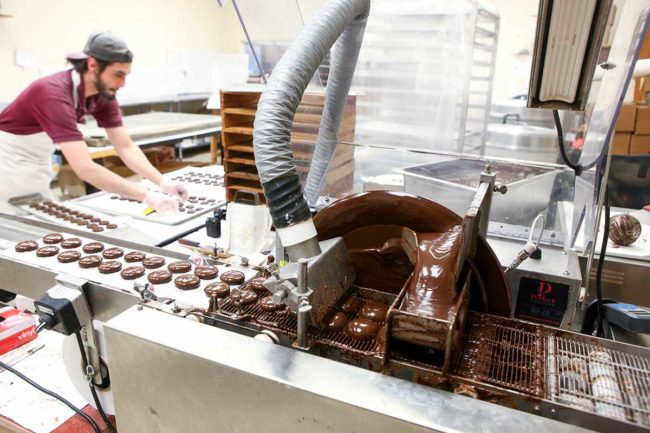 The new location also gives the Andrianos a climate-controlled environment to produce seasonal specialties like pillow candy (colorful hard candy in both spice and “fruit and friendly” flavors), ribbon candy (including their popular peanut butter-filled molasses ribbon candy) and handmade candy canes in a rainbow of colors and flavors, including peppermint, spearmint, wintergreen, cinnamon, orange, raspberry and root beer. In the past, hard candies were made in fall and winter only, because they are best made in cool, dry conditions.

Now, pillow candy can be made year-round. And Steve Andrianos was able to begin candy cane production well ahead of Hercules’ annual “Candy Cane Open House” events on Nov. 17 and 24. More than 1,600 people descended on the new storefront over two Sundays, leaving some shelves empty of product.

“It’s hard for us to keep up sometimes,” Terry Andrianos admits.

Hercules Candy Co. is an immigrant-founded business with a long history in Central New York. It got its start in 1910, when Robert Andrianos, a native of Greece (and Steve’s grandfather) and two of his brothers opened the Boston Candy Kitchen in the village. The Heman Street home was purchased in 1918 and candy production moved there in 1931, during the Great Depression.

Steven Andrianos grew up watching his father (also named Steven), uncles and aunts making candy and learned to make it himself starting at age 12. In 1977, five years after his father had closed the business, he brought it back to life on Heman Street.

Just as it has been for generations, the present-day Hercules Candy Co. is a family affair. Steve is the lead candymaker. Craig, 26, manages video production and media. His twin sister, Cara, often works in packaging and shipping and on the retail floor. Terry handles online orders, ingredients, stock, schedules. “I’m kind of like the detail person, basically,” she says.

After Easter of this year, the Andrianos started looking for a larger space in and around East Syracuse. They considered several possible locations and knew the West Manlius Street space was “a match made in heaven” when they saw it, Terry recalls. The retail area is bright and open, with plenty of room for shelving and displays. 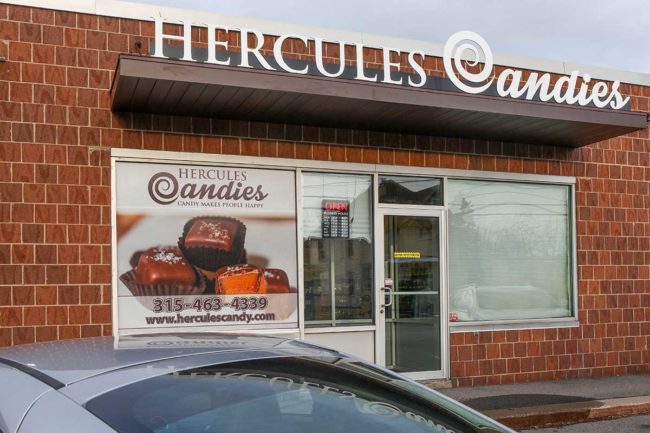 The front windows look out over West Manlius Street and another window overlooks the candy-making area, so visitors can get a glimpse of production.

On a recent afternoon, two employees (including YouTube star Max) were running peanut brittle and potato chips through the enrober, a machine that tempers chocolate and coats the ingredients. Steve Andrianos was seated at a table nearby, dipping ridged potato chips in vegan chocolate. Cara was fulfilling mail orders in the shipping room.

Heading into the holiday season, Terry Andrianos said they had already made 4,000 candy canes, 450 pounds of pillow candy, 1,200 pounds of nut brittles and various ribbon candies and barks. When they run out of things, they won’t be making more. For the best selection, shop early.

After Thanksgiving and the candy cane open houses, it’s time to turn attention to molded chocolates (think foil-wrapped Santas and stockings and dozens of other shapes), filled chocolates (like sea salt chocolates) and other chocolate specialties, like nut clusters. Terry says they’ll produce more than 2,000 pounds of various chocolates.

It took some time to master it, she says, but the enrober makes it more quick and efficient to coat things like marshmallows and sandwich cookies. “It’s a game changer for us,” she says.