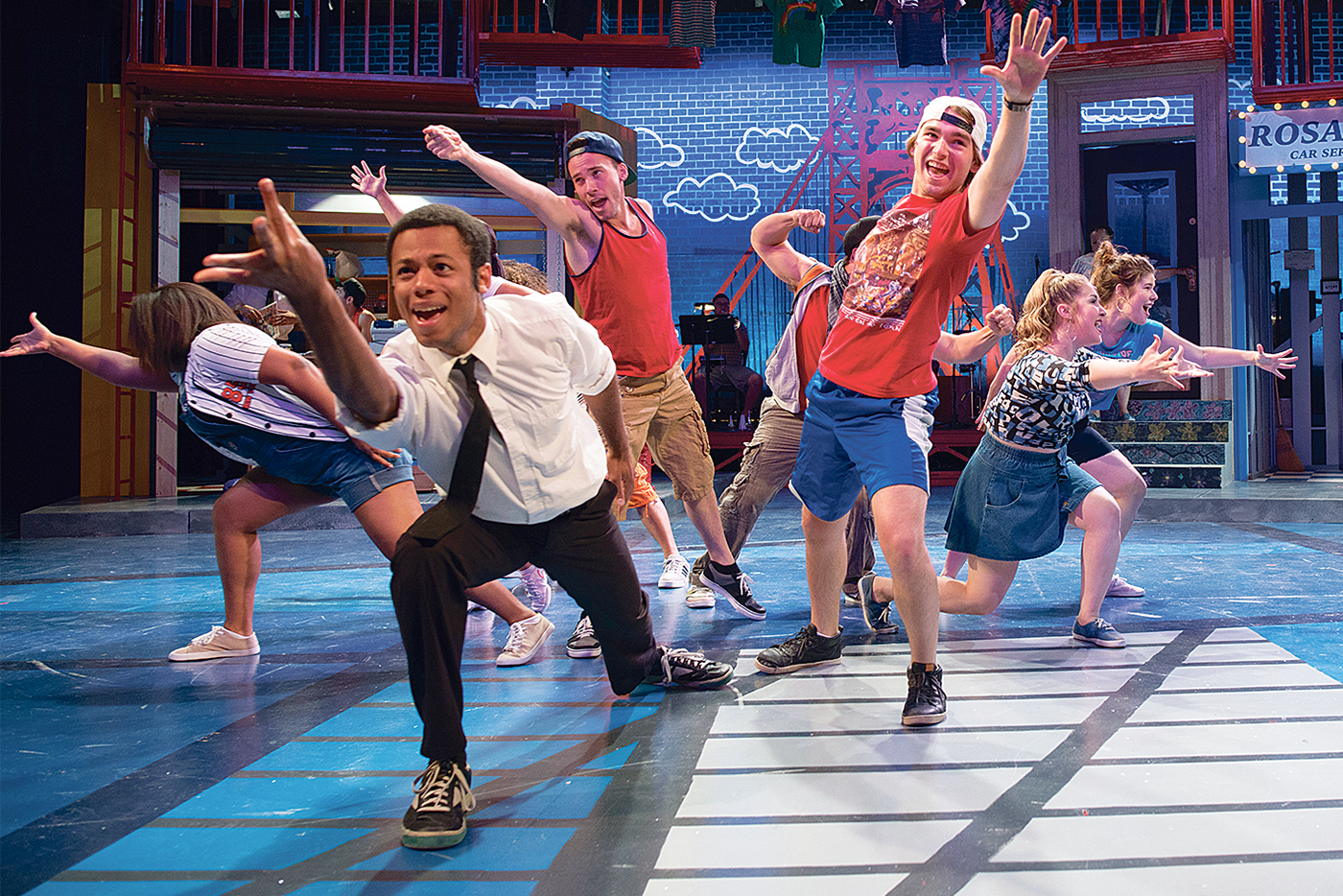 Before actor-composer Lin-Manuel Miranda fought to keep Alexander Hamilton on the $10 bill and became the most celebrated man in American theater, he gave us a lesson in Manhattan cultural geography. It seemed like a big breakthrough when In the Heights came to Broadway in 2008, but now the show (running through July 16 at Ithaca’s Hangar Theatre) feels almost like a prequel.

Washington Heights lies on the far northern tip of Manhattan, where Central New Yorkers land when they cross the George Washington Bridge. Once it was German-American; slugger Lou Gehrig lived there. Now it’s home to Caribbean immigrants, mostly Dominicans and Puerto Ricans. Miranda wants you to see that they’re just like everybody else, and they bring musical treasures to savor.

The Hangar’s publicity office quotes an early review of In the Heights as the “West Side Story of our time.” Don’t believe it. The music in West Side was composed by a cultivated aesthete and imposed from above, while what we hear in Heights is a vernacular that rises from the streets. West Side presents brutal conflict and death; the folks of Heights just want to get along. In the celebratory number, “Carnaval del Barrio,” the neighbors dance in their own musical idiom and show their flags: Dominican, Puerto Rican, Cuban, Mexican and eventually American.

Where In the Heights does resemble Leonard Bernstein’s classic West Side Story is that both are substantially dance productions. Almost half the numbers put the whole company on the floor, well guided by choreographer Julio Agustin and director Suzanne Agins. Eschewing the uniformity of standard Broadway shows, both the male and female choruses in Heights embrace a variety of physical types, often juxtaposing dancers following different steps. And while Jerome Robbins’ choreography in West Side Story conspicuously derives from modern ballet, In the Heights’ movements burst forth from the salsa-loving dance halls.

Quiara Alegria Hudes’ loosely structured book depicts two parallel stories unfolding on an urban landscape, possibly modeled on Sesame Street. Two modest retail storefronts stand next to each other, with a bright red fireplug between them. On one side is a tiny bogeda run by Usnavi de la Vega (Perry Young). The other is a taxi dispatch service run by Kevin and Camila Rosario (Danny Bolero and Celina Polanco). All of them are strivers. Usnavi’s first action is to chase away a graffiti artist, and the Rosarios boast of their daughter who has gone away to college at Stanford.

Although there is abundant spoken dialogue, we learn much of what we need to know in 25 musical numbers, starting with Usnavi’s rap exposition, “In the Heights,” which introduces all the main characters. Tension begins early when the Rosarios’ daughter Nina (Natalie Grace Ortega) acknowledges that she lost her scholarship in Palo Alto and has returned to the Heights. Her number “Breathe” tells us she is not disappointed. But how those funds might be replaced, and allow Nina to return, obsesses the parents for much of the action.

Love enters the scene obliquely. Across the street from the bodega stands a beauty parlor run by the flamboyant, even overpowering Daniela (Donnie Hammond), who appears to employ much of the female chorus. We notice quickly (aided by Kendra Johnson’s midriff-revealing costume design) that the most striking of these is Vanessa (Gerianne Perez), who has aspirations of her own. In her “It Won’t Be Long Now” she yearns to escape her alcoholic mother in the barrio and have a studio apartment of her own in the West Village downtown. When she stops by the bodega, Usnavi is slow to act and his mischief-making cousin Sonny (Nick Martinez) speaks up on his behalf to make a date.

Next door the Rosarios have had to hire an extra hand, tall, thin Benny (Austin Scott). Soon he and Nina are making sweet music together with “When You’re Home.” The senior Rosarios object vehemently, not because Benny may have had a few ancestors from Africa but because he doesn’t speak any Spanish. The Anglo world is distant in Miranda’s In the Heights, and no one in the barrio hears the kind of xenophobic taunts that are current in this year’s presidential campaign.

The only Cuban in the neighborhood, Abuela Claudia (Amy Jo Phillips), the matriarch who raised the orphan Usnavi, literally holds the ticket to resolve all tensions. She bought into the lottery at Usnavi’s bodega. Phillips, an Ithaca resident and local legend, stops the show with “Paciencia y Fe,” which means patience and faith.

The Hangar’s exuberant In the Heights is a landmark of a busy summer. Brag to your friends that you have seen it when they tell you they have tickets to Hamilton.