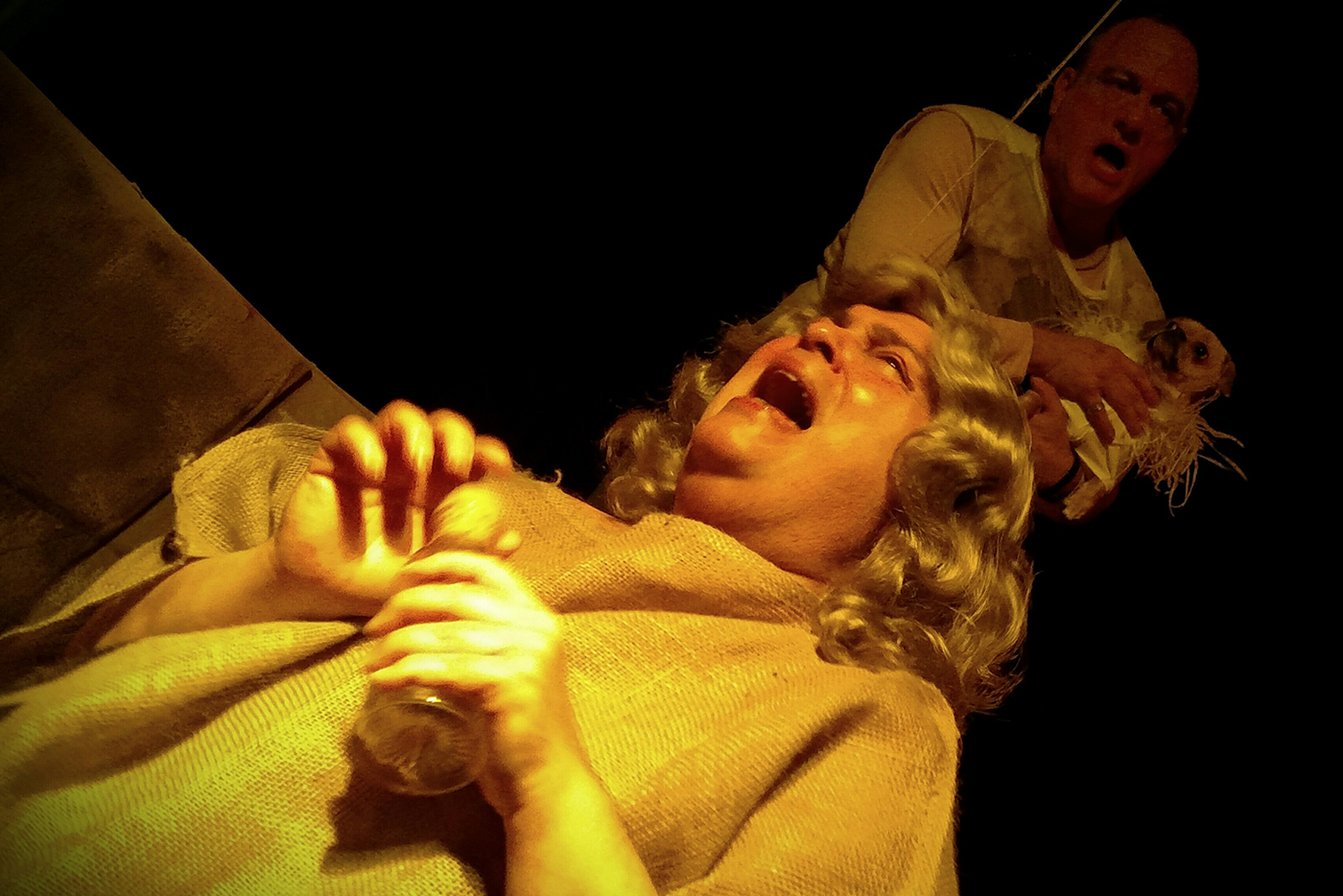 “Silence of the Clams” puts humorous spin on movie thriller.

A quirky IMDb.com blog runs under the heading, “Wonderful Films I Wanted to See Only Once.” Near the top of the list is director Jonathan Demme’s 1991 Oscar-winning hit, The Silence of the Lambs, the shocker that features memorable lines such as “some fava beans and a good Chianti.”

The 1991 Oscar-winning hit is gleefully parodied in playwright Jamie Morris’ The Silence of the Clams. The spoof, mounted by Rarely Done Productions at Jazz Central, 441 E. Washington St., runs through Saturday, Feb. 18.

Lambs is remembered but it did not become a cult film like Dr. Strangelove or The Big Lebowski. How many recall that the daughter of a prominent female politician (Diane Baker) is kidnapped, or that the ultimate goal of rookie FBI agent Clarice Starling (Jodie Foster) is a sexual sadist nicknamed Buffalo Bob? Given the focus of his machinations, he is here renamed Beaver Bob.

Clams’ plot line hews close to the movie’s template. FBI trainee Clarice Startling (Christopher James) is selected by Jack Crawford (Jay Merante) to interview a former psychiatrist, now incarcerated as a cannibalistic serial killer, to see if he can provide insights into the pursuit of Beaver Bob.

Actor James, while slightly built, is in no way effeminate, but he sports a raggedy black wig that tends to go askew or get caught on hooks. Yet he stays true to Clarice’s character. She is insecure about a humble birth in West Virginia and is mortified at hearing the street word for vagina. Her best compliment is to be compared with the young Beatrice Arthur.

Once at the mental hospital Clarice is led by the officious Dr. Chilton (Jimmy Curtin) to the cell of Hannibal the Cannibal himself (Trevor Hill). His family name is changed from Lecter to Licked-Her, providing a springboard to a half-dozen salacious puns.

Tursi’s casting of the experienced Shakespearean performer Hill, not a Rarely Done regular, might have been his wisest guarantor of hilarity in Clams. Possessor of an orotund baritone, Hill is a more stentorian figure than Anthony Hopkins was in the movie. No one is going to challenge Hopkins’ winning his Oscar, but he has a tendency to get twinkly. Hill, on the other hand, is the pluperfect straight man in this gay-friendly production.

Facilitating the shift to wider action are both visual support and an endlessly versatile supporting player. An upstage screen gives us visuals from the 1991 movie, such as Clarice’s scary entry into the mental hospital, and unaccountably, footage from the original Rocky (1976). Interspersed is footage from a cable talk show, apparently unaltered, of some American Gothic types discussing the horrors of biblical prophecy that is more lunatic than anything we see on stage.

The jack-of-all-roles supporting player is Stephen Paunovski, who pops up as inmates, corpses, body parts and, most notably as CNN’s Anderson Cooper.

It is unclear just when Jamie Morris wrote The Silence of the Clams, but its production history stretches back 17 years. So in comes Anderson Cooper, Congresswoman Nancy Pelosi and a slew of local references, including Onondaga Lake and Onondaga Community College. Playwright Morris is best remembered locally for Rarely Done’s December 2007 production of The Facts of Life: The Lost Episodes.

There can be no tamperings, however, with the object of Clarice’s quest: Beaver Bob (company stalwart David Minikheim). Although it takes until the middle of the second act to get to him, Minikheim’s outrageous and bravura performance dominates much of the last half-hour of the action, too much of which cannot be given away.

Increasing the tension (the plot is never neglected), Bob has abducted the giggly, blond-tressed daughter Catherine (Geno Parlato) of House Minority Party leader Nancy Pelosi (an unsmiling Parlato, in a demure suit and heels). Can this innocent if corpulent sweetie be saved from a fate worse than death? Beaver Bob’s demonic dance comes first.

Rarely Done productions tend to be lean on set construction, but The Silence of the Clams benefits greatly from Central New York Costumes and Karen Procopio’s excellent wigs, even when they’re supposed to be tacky.