About one month ago, Syracuse University men’s basketball coach Jim Boeheim said it would be “foolish” to think that this year’s team would be better than last year’s team, which won 30 games and reached the Final Four.

Perhaps Boeheim was right. This year’s Orange might be even better than that.

Boeheim’s point one month ago made perfect sense: With college basketball dominated by guards, how could the Orange be better when you had a freshman point guard (Tyler Ennis) and a redshirt sophomore shooting guard who averaged 11 minutes per game last season (Trevor Cooney) replacing the 11th pick in the NBA draft (point guard Michael Carter-Williams) and a four-year starter who was one of the steadiest players in SU history (shooting guard Brandon Triche)?

Here’s how: Ennis and Cooney could play lights out, and they have. With the guards leading the charge, the Orange is 9-0 and rose from No. 5 to No. 2 in the nation when the latest Associated Press poll came out Monday, Dec. 9.

Like the rest of the team, Ennis and Cooney had their moments through SU’s first four games against lightweights Cornell, Fordham, Colgate and St. Francis Brooklyn. For the most part, Ennis, Cooney and the rest of the Orange looked sluggish, leading Boeheim to question the sanity of anyone who thought they would be as good as or better than last season.

But then the Orange went to Hawaii for the Maui Invitational, and Ennis and Cooney raised their games and the team along with them. SU defeated strong Minnesota, California and Baylor teams in Maui (Baylor beat then-No. 3 Kentucky after losing to SU), and then walloped Indiana 69-52 at the Carrier Dome before cruising against Binghamton 93-65 this past Saturday, Dec. 7, at the Carrier Dome.

“I think everybody was highly motivated to go to Maui and play that first game and get things rolling,” said SU assistant coach Gerry McNamara, who tutors the guards. “It was the boost we needed as a team. Sometimes that’s all takes. Sometimes it takes a road trip to get your legs going and your emotions going.”

McNamara, a former SU star who knows a thing or two about rising to the occasion, said he’s just as surprised as Boeheim at the progress made by Ennis and Cooney in such a relatively short period of time.

“I never anticipated that he’d jump like that,” McNamara said. “I knew he was going to be successful, but his confidence level has just soared game by game, and he’s playing at such a high level right now.”

Boeheim praised Cooney for continuing to work hard and remain prepared through his redshirt freshman year and last year, when he had to sit behind Triche. Given his chance this year, Cooney is taking full advantage. 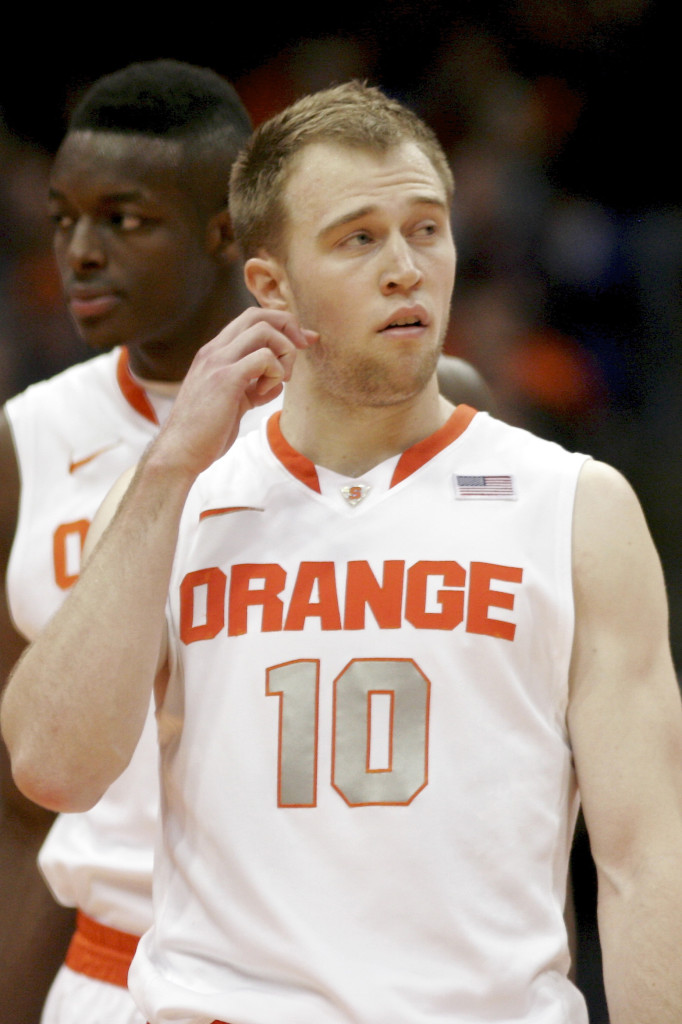 “It was a process and that’s how I treated it–with maturity,” Cooney said. “{It was} just learning from the guys in front of me and working with G-Mac {McNamara} every day, to having a good coach like Coach Boeheim and having a great support system. Just keep working and knowing one day your turn is going to come and it is going to start rolling.”

As a top recruit, Ennis assumed a starting role as soon as Carter-Williams left for the NBA, and he was expected to play well. But Ennis has been even better than advertised, with an incredible-for-a-freshman 3-to-1 assist-to-turnover ratio (44-to-15), 24 steals and 11.3 points per game.

“Tyler is kind of a change-of-pace guy,” McNamara said. “Michael {Carter-Williams} was an explosive scorer. Tyler can beat you by getting everybody else going.”

While he lacks Carter-Williams’ flash and athleticism, the 6-foot-2 Ennis has been just as good, if not better, at protecting the ball and distributing it to teammates. And he’s enough of a threat as a scorer to keep opponents honest.

“The better those two guys {Ennis and Cooney} play, the better C.J. plays,” Boeheim said, referring to SU’s leading scorer, C.J. Fair. “If they don’t play well like early in the year–when Tyler was struggling to score–C.J. struggles, because they have more guys helping on him. He needs those guys to play.”

Ennis, who’s from Canada, and Cooney, who’s from Delaware, became close in the summer when they were taking classes on campus and started working out together. Watching them in recent games, you’d think they have played together for four years.

”Me and Trevor have bonded since day one, and we have a relationship on and off the court,” Ennis said. “Playing with him and knowing him, I am starting to know when and where he likes the ball.”

There are still three months to go before the NCAA Tournament, and Boeheim would probably say it’s still foolish to predict another Final Four finish. But if Cooney and Ennis continue to play like veterans, Orange fans can at least start to dream.

“Both those guys are playing beyond any hopes or expectations, and that’s why we’re in a good position,” Boeheim said. “If they were playing like you would expect, we’d probably have at least a couple of losses at this stage of the season.”

[bullet]With final exams this week, the Orange is off until Sunday, Dec. 15, when they face former Big East Conference rival St. John’s at noon at Madison Square Garden. SU, now in the Atlantic Coast Conference, will also play former Big East foe Villanova on Dec. 28 at the Dome.

“When you play in these rivalries for so long, with so many good programs, I think it’s good to keep those alive,” Cooney said. “I think it’s good that we’re playing them this year, and hopefully more next year.”

Boeheim said the Orange will continue to play former Big East opponents, but it’s not the same as playing them in the same league.

“They don’t have the same meaning; it is just the way it is,” he said. “Before the Big East, our biggest game was St. Bonaventure, and we don’t play them and no one cares. Obviously, fans are not disappointed we are playing in the ACC. Those are the only people that matter at the end of the day. If they are happy, we are all happy.”

Here’s a look at the performances of SU point guard Tyler Ennis and shooting guard Trevor Cooney through the first four games and the last five: