Paul Colabufo explained there are a couple options to take and there are plenty of obstacles to overcome when it comes to breaking and securing a spot in the Guinness World Records book. This year, he and seven other members of the Turbo Bocce league set out to break the record for the longest marathon playing bocce. The current record sits at 24 hours and 29 minutes, which was set in November 2013 by a league in Key Largo, FL.

The reasoning behind the marathon of 61 games; played from 9:30 a.m. on Saturday, Jan. 23, to around 4 p.m. on Sunday, Jan. 24; is more benevolent rather than a promotional endeavor. The 30 hours and 33 minutes pending record is dedicated to Robert and Joseph Mead, two brothers from Baldwinsville who lost their lives last summer in a tragic kayaking excursion. 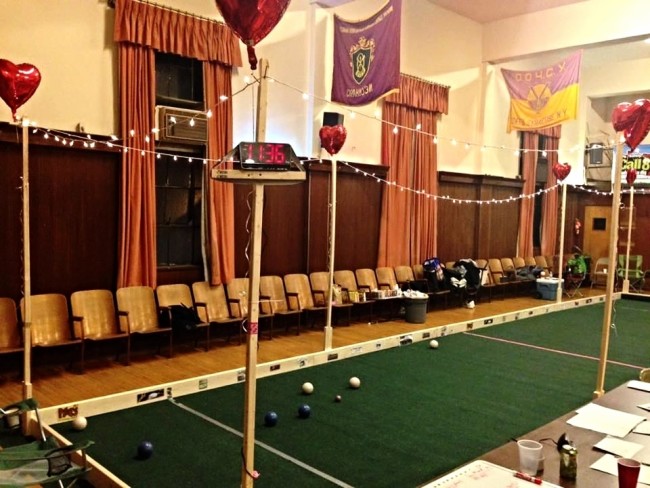 The ‘camera view’ of the bocce court in the Ukrainian National Home. Photo by Christopher Malone | Syracuse New Times

“We ran it by the widows (Angelosanto and Mead), and they picked their team,” Colabufo said. “They wanted the second team to be players who have been in the league for a long time.”

Turbo Bocce originally started in 2004 and was comprised of less than 10 players. Although it still is a simple yard game, the league has since ballooned to over 100 people. The backyard banter grew and infiltrated various parks throughout the Syracuse area before settling at Sharkey’s Bar & Grill. Due to the size of the in-league competition, there are two evenings of league play instead of one. It’s $50 to join, and the rest of the information is explained on the league’s website.

Teams Mead and Rob & Joe kept tally of the 35 to 26 wins, but the only competition was mental and physical, staying awake and playing for the cause. “We’re on the same team,” Colabufo said. “No one broke down.”

He’s not a coffee or soda drinker, and feeding off the excitement of the other players and onlookers was how he rolled through the hours. A digital clock counted down the minutes to the 30-hour mark, the time they anticipated reaching.

“I brought 10 movies, because I didn’t think we’d be focused on bocce for that length of time,” he added. “We didn’t watch any of them.”

Despite the personal push, there were plenty of other things that could have gone wrong. For one, Turbo Bocce did not take the option to directly bring a representative from Guinness. They would have had to pay for the round-trip flight, lodging and food, which would have cost thousands of dollars. Instead, they decided to adhere to the strict requirements from Guinness:

With all the little pieces to be considered, Colabufo said a lot could have gone wrong. “We needed witnesses at 3 a.m. If they didn’t show up, this effort would have failed.” He said, expressing his gratitude. The court itself, which was personally built by the team, cost $400 in materials. The monetary loss was not at the forefront of their minds.

At approximately 10 a.m. Sunday morning, the champagne corks were popped. Although feeling tired and the bocce marathon itself are things of the past, the Turbo Bocce members are currently in a marathon waiting game. “Right now it’s still official. They take their time with reviewing everything,” Colabufo said. “It took them four months to just approve the attempt.”

Although they may not be expecting an official ruling anytime soon, the octet of bocce buddies are resting comfortably knowing they’ve accomplished something to be recognized nationwide in the names and spirits of two longstanding league participants, close friends and spouses.

Syracuse ‘Probably In’ NCAA Tourney, According to CBS
News and Blues
To Top