Thrill-seeking hiker and climber David Guilfoyle lives on the edge.

We make hundreds of mundane decisions every day: what to wear, what to eat, what TV shows to watch, what stuff to buy. But one of the greatest appeals of extreme hiking and climbing for David Guilfoyle, 35, is the fact that his every move actually matters.

“Your decisions have real-world and immediate consequences,” he explains. “Climbing mountains tunes out the mundane and makes you feel alive. It wakes you up from the monotony of work, sleep and television. Plus, the views are incredible. You’ve never seen stars until you’ve seen them from Camp Muir {on Mount Rainier} at 2 a.m. as you’re staring off across the Cowlitz Glacier.”

When Guilfoyle was growing up, weekends with the guys meant trips to explore the outdoors, whether hiking, climbing or skiing. “Being 8 or 9 years old and going with the boys was the greatest thing in the world,” he says. “Every time I go out there, it’s the excitement of going out with the boys on a trip.”

Guilfoyle’s weekend adventures now include ice climbing in the winter, summertime rock climbing, hikes and camping, all in regular rotation. During the in-between times he stays in condition to tackle the terrain he seeks out.

“It’s a lot of cardio,” he warns. “I’m not fast. It’s a long cardio where it takes endurance. The Pemi Loop {a hiking circuit in the Pemigewasset Wilderness of New Hampshire’s White Mountains} took 22 hours, really, without a break, maybe only a half-hour or 45 minutes. I also get into a lot of running and lots of cross training.”

Guilfoyle also enjoys boxing. He participates in boxing classes at the downtown YMCA with trainer Tom Coulter, a world-famous athlete and Olympic coach who has worked with well-known boxers including George Foreman, Mike Tyson, Riddick Bowe and Roy Jones Jr.

He also emphasizes the importance of running, not only for the physical benefits, but for the mental aspect. “Running has a rhythm,” Guilfoyle says. “Long hikes are about rhythm. Then your mind stops buggin’ you.”

There’s plenty of time for hiking minds to settle when trips are as long as those Guilfoyle seeks out. In February 2012, his group went hiking to Mount Katahdin in Maine, the highest mountain in the state. They drove in on Friday, then hiked 14 miles to set up a base camp, which they had to dig four feet into the snow to secure. The next morning, they hiked eight miles around Knife’s Edge, then 14 miles back to the campsite, followed by an additional hike on Sunday. They hiked about 30 miles that weekend–plus they drove 10 hours home. 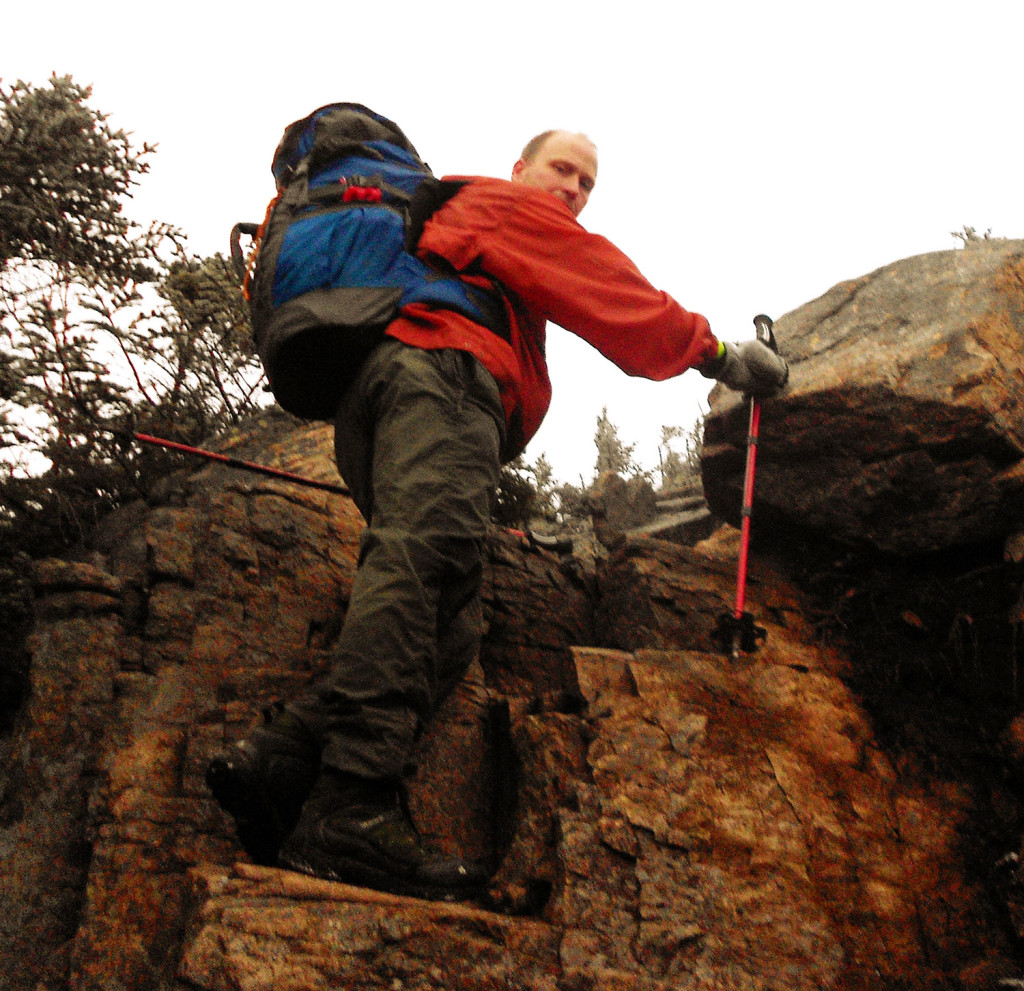 In addition to hikes, Guilfoyle’s gang is also into ice climbing. “The first time I went climbing on ice, it was baffling,” Guilfoyle recalls. “You can’t grab a hold of it. You have to completely rely on the tools. But the first time I fell, I only fell about 10 or 15 feet, bounced off the ice, spun around and kept going. But you’ve got to think about what you’re doing. There’s always danger there. Living on the edge has real-world consequences.”

Guilfoyle has seen those consequences firsthand: His friend, Calum Stewart, fell while climbing the 4,610-foot Nippletop Mountain on Dec. 15, 2012. “It was sobering, that accident,” Guilfoyle says. The group thought Stewart had died until they saw some movement. Part of the group climbed to the top of the mountain to call for help, while Guilfoyle waited for hours with Stewart at the base. Stewart lost his toes to frostbite, yet is on his way to a full recovery.

Guilfoyle found many hiking companions through Meetup.com, run by Jim Wallace. Guilfoyle and Wallace have done numerous trips together since connecting through the site. “The internet is a great place to find hiking groups,” Guilfoyle says.

Many of these hikes are not for the timid, however. A trip report of the Pemi Loop from Wallace details what it’s like to keep up with these hikers:

“Dave and I would complete an epic hike that I think can’t be topped at least by any meetup group in New York. We traveled over 37 miles climbing over 14 summits through boulder fields, snow, ice and exposed ridges. Most of the summits were outstanding with a few exceptions as Zealand and Galehead. The highlight was perhaps our traverse over Franconia ridge during the night as we were getting pounded with snow and 70 mph winds along with a negative wind-chill factor. At times we were almost blasted off the ridge. In the end the whole trek took us 22 hours to complete. This was definitely the ‘Hike of all Hikes,’ topping out any Great Range, Presidential Traverse or Devil’s Path by a long shot.”

Dangerous as it is, it is the calm within the storm that still grabs Guilfoyle. “You have to be there. You have this complete consciousness of the moment,” he says. “When you get there, you don’t think about your mortgage, your job. You’re just there. Space around you is the only thing that matters.”