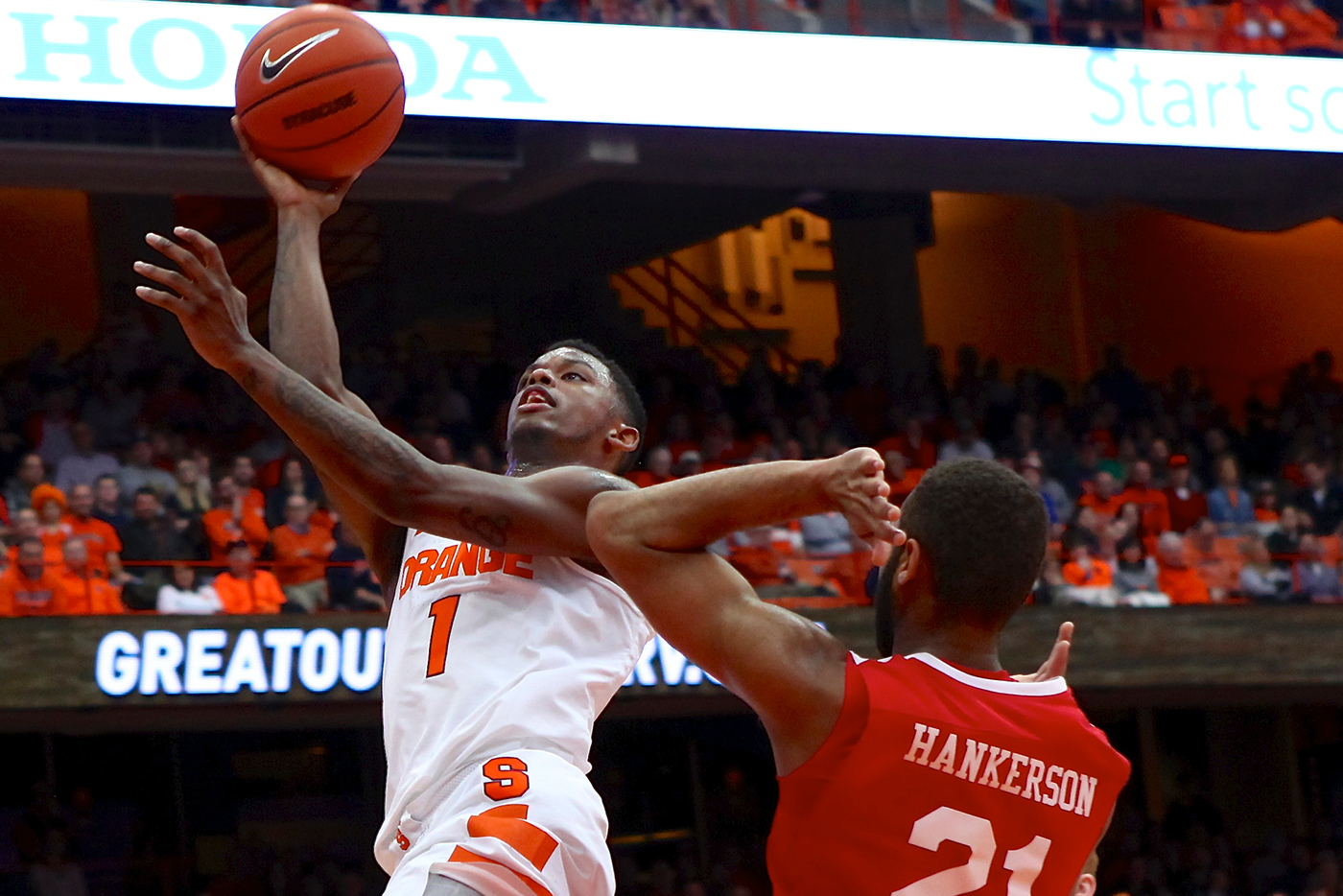 SU renews G-Town rivalry and remembers a legend this Saturday.

Syracuse University freshman forward Taurean Thompson, who was 2 years old when John Thompson retired as Georgetown’s coach, was asked if he had ever watched ESPN’s 30 for 30: Requiem for the Big East.

“No,” said Thompson, who then perked up when told the 2014 documentary included footage of a much younger Jim Boeheim throwing a chair at a news conference following yet another heated SU-Georgetown game.

“Now,” Thompson said, smiling, “I might just go home and watch it.”

With Georgetown heading to the Carrier Dome for a noon game on Saturday, Dec. 17, Requiem for the Big East should be a prerequisite this week for all Orange players who haven’t watched. The show about the heyday of the Big East Conference doesn’t cover all the Syracuse-Georgetown highlights, but enough to give the current players a sense of why Saturday’s game means so much to this community and why 30,000 or so fans are expected to attend. 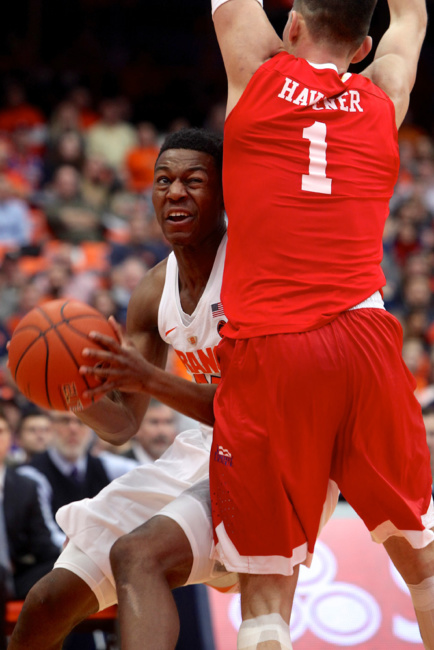 Orange freshman guard Tyus Battle did watch Requiem for the Big East and said he knows “the fans and Coach Boeheim are going to be fired up.”

“It’s a huge Big East rivalry,” Battle said. “It’s going to be competitive, physical, and that’s what I love. I know our fans are going to pack the Dome and the stadium’s going to be electric. We have to just come out here and be ready to play. It’s going to be a good challenge for us and I think we’ll be ready.”

They had better be. Because while this game is a celebration of the past and will include a tribute to former Orange star Pearl Washington, it’s also an important game for SU and one the players can’t take lightly despite Georgetown’s so-so start to this season.

Last season, you’ll recall, the Hoyas upset the Orange 79-72 in Washington, D.C., in the first game of Boeheim’s NCAA-imposed nine-game suspension. And in 2013, in their final Big East showdown before SU moved to the Atlantic Coast Conference, No. 11 Georgetown defeated No. 8 Syracuse 57-46 before a Carrier Dome crowd of 35,012 — an NCAA on-campus record that has since been broken twice for Syracuse-Duke games at the Dome.

Following the game, Georgetown coach Thompson famously ignited one of the fiercest rivalries in college sports by declaring, “Manley Field House is officially closed!” Thompson’s son, John Thompson III, is now in his 13th year as Georgetown’s coach and owns an 11-7 record against Syracuse.

“I expect the atmosphere to be crazy,” SU point guard Frank Howard said. “Big rivalry; you know what’s behind the game. I think if we acknowledge that, it’ll give us a little more juice to play. So I think that we know the stakes, the rivalry, and we’ve got to take care of business at home.”

The Orange is 5-3 and can’t afford another non-conference loss to a Georgetown team that lost four of its first six games but has now won four in a row, albeit against Howard, Coppin State, Elon and LaSalle. The only Orange team with three non-conference losses to make the NCAA Tournament in the last 25 years was last year’s squad that made a miraculous run to the Final Four.

“Georgetown struggled a little early on, but we know they’re a good team, they have some good players and I think that would be a huge win for us,” Battle said. “We have to get back on track and that would be a positive step in the right direction.”

Syracuse has the week off after thumping Boston University 99-77 this past Saturday, Dec. 10, at the Dome. The Orange is 6-0 against mid- to low-majors but 0-3 against two ranked teams, South Carolina and Wisconsin, and another former Big East rival, Connecticut.

What was viewed in the preseason as the Orange’s biggest strength — depth — has become a frustrating puzzle. Boeheim said he’s trying to fit five players (Thompson, Tyler Lydon, Tyler Roberson, DaJuan Coleman and Paschal Chukwu) into the center and power forward positions, while using his other four scholarship players (Howard, Battle, Andrew White and John Gillon) for the point guard, shooting guard and small forward spots. 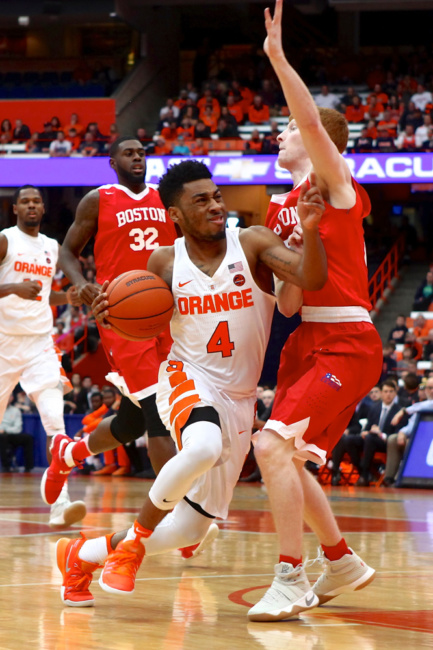 The Orange players have struggled this season with rebounding, their defensive rotations in the 2-3 zone, and spotty offensive performances stemming from, in part, two point guards (sophomore Howard and fifth-year transfer Gillon) who are playing their first full year in Syracuse’s system.

“We’re still trying to fit everybody together,” Boeheim said after the Boston University game. “It’s going to take a long time. I think it was foolish for me or anybody to think this was going to happen right away. And it’s still a long ways away from where we need to be.”

Perhaps the Georgetown game will provide a spark to help the Orange move closer to where it needs to be. Although the students will be on their holiday break, the fans should be at their loudest for the Hoyas and they’ll be motivated by a halftime ceremony honoring Washington with video highlights of Pearl’s career and a chance to win an authentic “Pearl” long-sleeve shirt like the ones worn by the Orange players during warm-ups throughout the 2015-2016 season.

Pearl, who died last spring from brain cancer, was at the center of some of the biggest Georgetown-Syracuse moments. In January 1985, Washington’s jumper with eight seconds remaining gave SU a 65-63 win over the Hoyas at the Dome — Syracuse’s first win ever over a team ranked first in the AP poll.

In that same game, a fan threw an orange at the backboard with Georgetown’s Patrick Ewing at the foul line. Thompson pulled his team from the court and Boeheim had to settle the crowd by speaking over the PA system.

In the Big East Tournament in March 1985, Pearl gave Ewing an elbow to the ribs and Ewing retaliated with a wild punch that barely missed Washington. The bench emptied as both players were restrained; the Hoyas won that game to advance to the Big East title game.

As Requiem for the Big East shows, that incident was just the second-most famous fight in Georgetown-Syracuse history. In the Big East Tournament championship game in March 1984, Georgetown’s Michael Graham took a swing at Syracuse’s Andrew Hawkins during the Hoyas’ overtime win. Graham was initially ejected but the refs changed their minds and called only for a two-shot foul. At the post-game news conference, an incensed Boeheim told reporters “the best team did not win tonight” and stormed out, tossing a chair along the way.

At 72 and with four Final Fours and a national championship under his belt, Boeheim’s chair-tossing days are probably over … probably. But thankfully, the Georgetown-Syracuse series isn’t done, and it’s up to the current generation of players to keep the rivalry alive.

“Any teams involved in the old Big East, you know that’s a sensitive subject to a lot of people,” SU’s White said. “Obviously, Syracuse-Georgetown is a well-documented game, and we’re doing a special thing for Pearl, so that’s going to amp it up even more.”