The blessed union of puppets and theater has been around for centuries, albeit mostly from the moppet viewpoint: Think of old Punch-and-Judy shows, or even Ed Sullivan bantering with Topo Gigio. While the relationship has taken occasional just-for-adult turns, especially concerning Avenue Q’s naughty take on Sesame Street, the art of stage puppetry reaches its summit with War Horse, the Tony Award-winning World War I spectacle co-presented by the National Theatre of Great Britain and South Africa’s Handspring Puppet Company, the latter responsible for the show’s astonishing life-size marionettes. 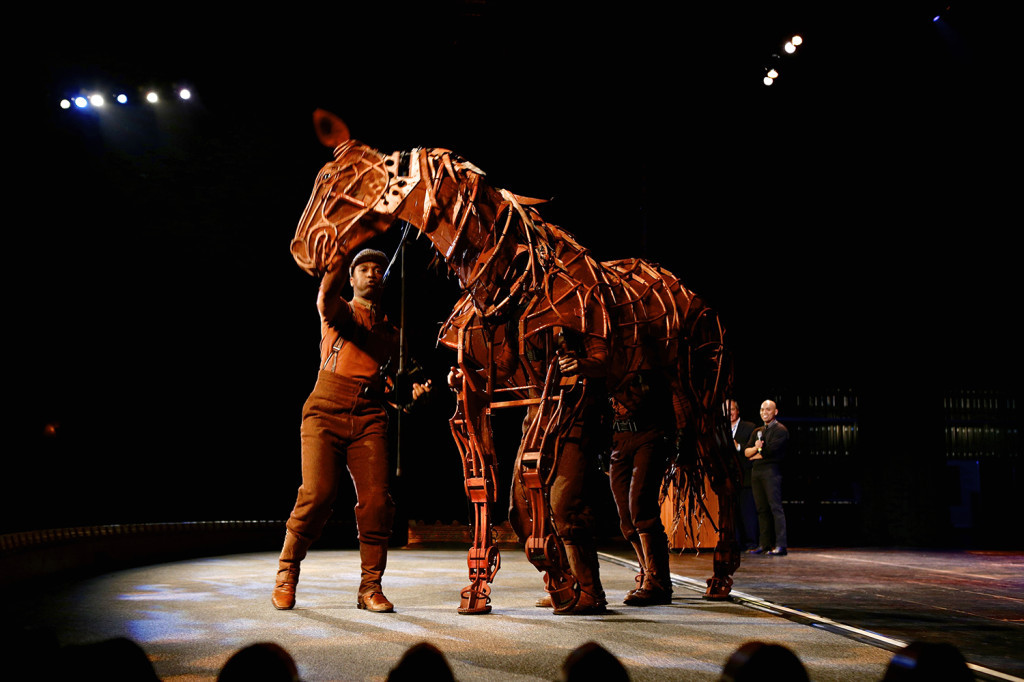 Based on Michael Morpurgo’s 1982 children’s novel and adapted for the stage by Nick Stafford, War Horse presents your basic boy-and-his-horse story with mega-doses of imaginative storytelling, executed with directorial flair by Bijan Sheibani. In August 1912, impoverished farmer Ted Narracott (Gene Gillette) is surely the last person in Devon, England, who can afford to pay a whopping 39 guineas for a captured foal during an auction. Yet the stubbornly proud Ted does just that in order to best his wealthy brother Arthur (Andrew Long) in the bidding war, much to the consternation of Ted’s long-suffering wife Rose (Maria Elena Ramirez).

The subplot regarding the reasons behind the Narracotts’ simmering fraternal rivalry provides much of the first act’s drama, until the realities of a world at war start creeping in. Before those hostilities commence, however, the focus is on Ted’s teen son Albert (Michael Wyatt Cox) and his quicksilver bonding with the foal named Joey. As the horse matures, another wager between the bickering brothers takes place, this one concerning Joey’s doubtful skills as a plow horse.

Yet the seismic business transaction that Ted makes with the British cavalry, as he agrees to sell Joey despite his promise that the horse will always belong to Albert, rips asunder the family. A distraught Albert lies about his age and joins the army, all in the increasingly dim hopes of reuniting with Joey amid the blood-soaked, barbed-wired French trenches, with tragedy just a hoofbeat away. 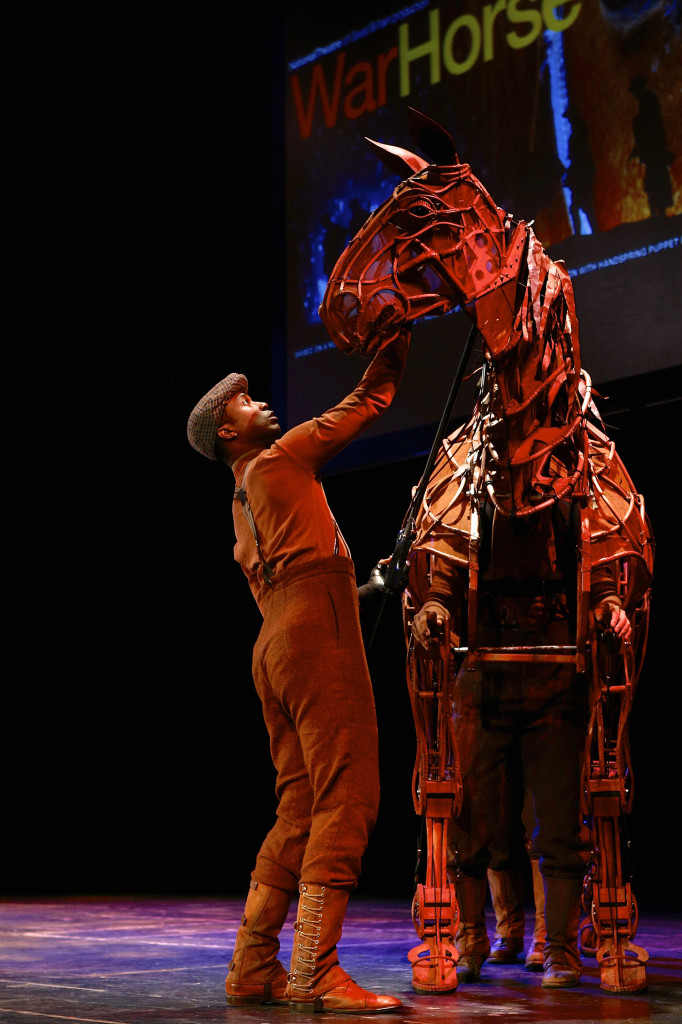 The Joey puppet prepares for its central performance in Famous Artists’ touring production of War Horse at the Landmark Theatre.
(Michael Davis Photo)

The floorboards version of War Horse had its beginnings in 2007 as an attraction at London’s off-West End, then went on to become a Broadway sensation, earning a nod for best play at the 2011 Tony Awards. The dramatic elements may seem a tad simplistic, but the show is really about primal emotions that need little explanation, plus it shares similarities to movie classics: the animal appeal of Lassie Come Home and National Velvet, the stark wartime flavors of All Quiet on the Western Front, and the sturdy family values of How Green Was My Valley. The production itself is a visual blowout that features how-did-they-do-that? technical effects to recreate its splashy battle sequences. Director Steven Spielberg must have certainly noted the cinematic visuals of the War Horse play before he commenced filming his 2011 movie adaptation.

Touring production director Sheibani manages to yoke all the disparate elements into a massive yet cohesive unit that often plays as a grand fable, particularly when a pair of strolling musicians (Spiff Wiegand and John Milosich) pops in and out of the sidelines to provide a harmonic narrative counterpoint for theatergoers. The lighting design by Paule Constable and Karen Spahn may seem quite dark at times, however, which is understandable in retrospect in order to better hide the puppet illusions.

Yet there is so much imaginative pantomiming on display that this production of War Horse is clearly enraptured by its own eye-popping theatricality. It’s mostly a family show, too, despite a few moments of violence and a gruff sergeant (Brooks Brantly) who uses the adverb “effin” as a punch line. And while there may be a few War Horse neigh-sayers who will whine about this equine’s sentimental finale, everyone else will likely be tugging at their handkerchiefs.

Famous Artists’ touring show also offers theatergoers the opportunity to be dazzled by those life-size Handspring puppets; when War Horse eventually becomes available to regional theaters, those companies will have a difficult time attempting to pull off such detailed puppetry. Handspring’s impressive artistry is highlighted when Joey the foal morphs into adulthood in an on-stage moment of supreme special effects. Blink and you’ll miss it. (Handspring also created a goose puppet that is wheeled about the stage for comic relief.)

The Joey puppet is handled by three performers, all dressed in appropriate farmhand period garb, with one actor always leading the horse by its bridle. The other two are underneath the wondrous contraption, as they control every step, tail flap and ear twitch. Theatergoers will quickly embrace the illusion, which is more amazing when one considers that this is one horse who will ride into the Salt City with eight legs.

This production runs through Dec. 1.

Back to the Future
Failure to Communicate
To Top