In adapting three of his short stories for the stage, Ray Bradbury, the most poetic of all science fiction writers, relied on two strong advantages. All three are composed primarily of dialogue, which also proved useful when some of them were adapted to the television series, The Ray Bradbury Theater. Additionally, each playlet is structured as a mystery, but not a whodunit. We encounter recognizable types–two virile young men, a bourgeois family, or a cluster of street people–and we come to realize they are all in extraordinary circumstances. With them we have to figure out how to cope. As the conventions of science fiction require, all three are projections into the near future, but all wrestle with issues we know from our own lives.

The World of Ray Bradbury was first staged in Los Angeles in 1963, where it enjoyed a long run, but has been rarely seen since.

Mounting The World of Ray Bradbury has been a labor of love that he has shared with two pals. Marshal directs the middle number, The Veldt, based on one of the author’s best-known short stories from 1950, while veteran C.J. Young takes the first, The Pedestrian, published in 1951, and newcomer Liam Fitzpatrick helms the third and longest, To the Chicago Abyss, published in 1963, coming after the intermission. The different directors guarantee changes in tone. Bradbury might have had a consistent set of values, but he did not always speak in the same voice.

In The Pedestrian an intense, obviously unhappy man, Robert Stockwell (David Minikhiem), sits anxiously watching some kind of touch-screen monitor we cannot see. He is joined by the cheerier Leonard Mead (Daryl Acevedo), who encourages Stockwell to tear himself away from the screen and go for a stroll, which appears to be forbidden. They exit the scene and the building. Then on the TV monitor above the set, the two characters appear to continue the dialogue we have just seen live as they walk the abandoned streets, visibly Syracuse, standing in for Anywhereville.

Peering into windows, they see families virtually worshipping images on screen because people are forbidden to go out.

They are under threat from the motion police for experiencing life on their own instead of acceding to the prescribed images. Video director Bryan Simcox deserves applause for supplying the spooky yet eerily familiar footage.

Both players are in top form, but Minikhiem is wonderfully convincing as the deprived creature who finds ecstasy in encountering a dandelion, a favorite Bradbury symbol.
Bradbury was unquestionably prescient about our reliance on technology but not persuasive. After watching The Pedestrian, several people in the audience turned on their cell phones to check out an electronic image.

The second item, The Veldt, is not only the best-known, but it was also included in the 1969 film The Illustrated Man and packs the sharpest thesis. It’s a triple-header in which Bradbury whacks conspicuous consumption, indulgent parents and bratty ungrateful kids. Only it’s set in the future, obliging costumer Wendy Pitoniak to outfit the nightmare Ozzie-and-Harriet characters in beige and white Flash Gordon-ish duds.

Proud poppa George Hadley (Jamie Bruno) boasts that he has acquired the perfect “playroom” for his children Peter (David Kampf) and Wendy (Sydney Dennison). The allusion to J.M. Barrie’s Peter Pan characters is duly noted. That playroom brings into the house not virtual reality, which we have had for some time, but actual reality. If the kids want the Alps, for example, it will come with wet snow and hard, frozen ice. 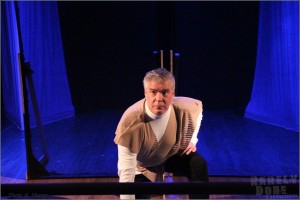 Jimmy Curtin as the psychiatrist in Rarely Done’s The World of Ray Bradbury. (Photo: Robb Sharpe)

What the children want is Africa, however. When the story was published 63 years ago, the veldt still swarmed with flesh-eating predators, not yet thinned out by poachers. George’s canny wife Lydia (Rita Worlock) senses the obvious danger of such an indulgence to the household, and a ruckus ensues. To the rescue comes a sweet-talking enabling psychiatrist named David McClean (Jimmy Curtin). The implications of his name and his snug, white leggings are not to be overlooked.

The Veldt is the only one of the three Bradbury playlets that inhabits the moral universe of Rod Serling’s The Twilight Zone, ordinarily an entirely different creation.

Both men are contemptuous of the notion that mere purchasing power protects you against the truths of nature.

To the Chicago Abyss, written almost a decade and a half after the others, comes from a time when dread of nuclear holocaust stalked the land. With a large cast clothed in Wendy Pitoniak’s raggedy costumes, the look is more that of post-apocalyptic Things to Come, the 1936 movie by H.G. Wells and William Cameron Menzies. Universal want reigns over a blighted landscape. Lake Michigan has been drained by a blast, a single train crosses the nation once a week, and a single can of vegetables is considered a rich payment.

An old man (Jeffrey Gorney) drags in keening about his losses. Instead of lamenting the absence of, say, lovely women or luxurious accommodations, he starts in on the beauty of cigarette packages like Lucky Strike, Pall Mall and Old Gold. Well, Bradbury was writing in 1963. The character is unfortunately named “the man who remembers mediocrities” in the program, which undercuts much of his effect.

To the Chicago Abyss was written about two years after Andy Warhol immortalized the mysterious allure of the Campbell’s soup can.

Here we have a man near starvation with no place to sleep, and he longs for the comfort of the yellow Butterfingers wrapper. He’s also a perfect voice for Bradbury, the writer who put dandelions above roses.

Gorney, a New York University graduate, portrayed the doomed thespian Mr. Hyde in last March’s Appleseed Productions mounting of I Remember Mama. His poetic riffs are the strongest element in this show.

WHEN: Fridays & Saturdays through Nov. 23