In the 800 years the English were running Ireland there were many rebellions by the natives, but the balmy summer of 1833 was a quiet time. In advance of building better roads and railroads, the redcoats in charge wanted to straighten out the map, especially to regularize the nearly unpronounceable poetic or folkloric names from the native Irish or Gaelic language. This had long been done willy-nilly, without regard to what the names meant. Thus Corcaig (“marsh”) became Cork, the southern seaport. Now the conversion would be massive, as every hillock and crossroads would be reformulated.

For some this is to be shrugged off, but to aging schoolmaster Hugh (Craig Kober), the loss of native names is the death blow to the civilization.

Friel, the most erudite of playwrights, expects you to know who Pliny the Younger is, but that does not mean he lacks a sense of fun. All the action takes place in a native-run “hedge school,” splendidly realized in scenic designer Jen Medina-Gray’s evocative set. A unique institution that had survived from bardic times, male and female students attend side by side, and a student might choose never to leave. Aged comic character Jimmy Jack Cassie (Matt Maretz) is still mastering his Latin and Greek. Emphasis is on the ancient classics, even though the medium of instruction is Gaelic or Irish. As schoolmaster Hugh explains to an English visitor, “We’re more tied to the Mediterranean and tend to overlook your island.” Jimmy Jack knows only one English word: the useful “bosom.” 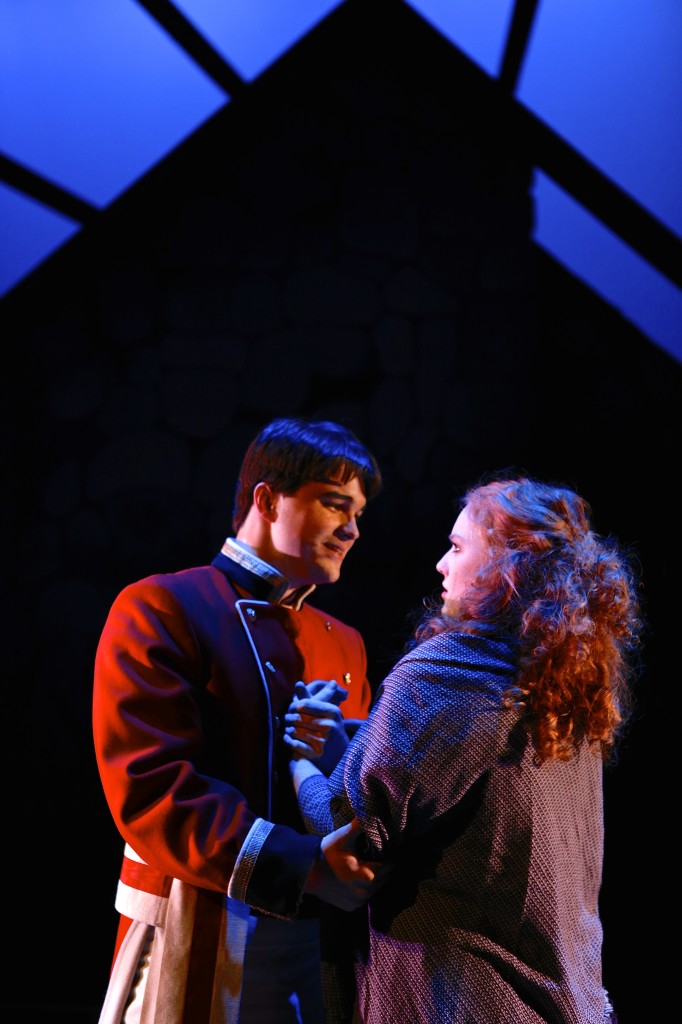 Despite Hugh’s stern rebukes when students are slow to respond, he is overall a light-handed disciplinarian in the mold of Gabe Kaplan’s Welcome Back, Kotter. Bullyboy Doalty (Tom Hayes) itches to make mischief, and brunette Bridget (Ana Marcu) makes a comely enabler. Shy, tongue-tied Sarah (Jesse Roth) can barely speak in any language, but we see her unrequited crush on Hugh’s limping son Manus (Johnny McKeown). Tall redhead Maire (Whitney Crowder), stately in her ragged clothes and scuffed shoes (credit to costume designer Nikole Moreno), knows a few snatches of an English song, which she mispronounces, but she would gladly learn more.

Manus, good-hearted and empathetic, would like to emulate his father as a poorly paid hedge schoolmaster, even as government-funded National Schools, which pupils attend every day of the year, are entering the countryside. His fondness for Maire, the reigning beauty, is not returned. Manus’ clothes and his manner make sharp contrast with his ebullient brother Owen (Max Miller), a gleeful opportunist with his eye on the future. Dressed in bourgeois finery, Owen is an advance man and translator for the English survey team. He says he is untroubled that the English call him “Roland,” ignoring his Irish name (a plot parallel to what they’re doing to the map), and marks himself “rich” on a grand two shillings a day.

Costumes define tone for several scenes, such as when the English show up in brilliant parade-ground scarlet while working in the field.

The older Captain Lancey (Moogie Brooks in an excellent comic turn) is a British blockhead, with nothing but contempt for the natives and their language. Like millions of tourists after him, he is sure he can be understood if he’s just louder and slower with a little acting out. His stiff neck contrasts with the enlightened and romantic views of the much younger Lieutenant Yolland (Derek Boyer Goh), who is enchanted with the antiquity of the culture he’s destroying and hankers to go native.

Although the language we hear is English, with snatches of Latin and Greek, Friel keeps reminding us that the native Irish speak to each other in their own language and do not understand most of spoken English. This device, while useful to Friel’s political ends, contributes to one of Translations’ most exhilarating scenes: the love duet between Maire and Yolland before the second act’s intermission. We know what they’re saying, but they cannot understand each other. Apart from the officer’s obvious masculine charms, Maire sees his language as the ticket for emigration, possibly to beckoning America.

Director Gerardine Clark is at her strongest here, delivering more humor than has been seen in other productions, while also retaining touching emotions and even a soupcon of eroticism. Some of the excitement derives from crossing the taboo colonizer/colonized divide, which can exact a price. 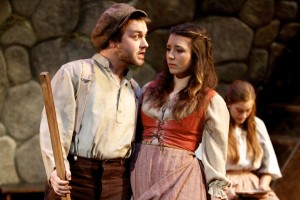 Things do indeed go badly, and Ballybeg faces not just cultural conquest but the physical destruction of a pogrom. Some flee the scene, but loyal Jimmy Jack and Maire remain with Hugh. His final speech is an extended quotation from the bellicose Latin epic The Aeneid on the destruction of Troy, the presumed ancestor city of the Romans. If we did not recognize the opening line, Urbs antiqua fuit (“There was an ancient city which . . . ”), Hugh signals to us earlier that doomed soldiers of the 1798 rebellion, a generation before, carried it in their pockets. Director Clark serves the speech poorly by having Hugh sound resigned and dejected, whereas the words imply lamentation with resolve, a strength even in catastrophe.

Translations is one of the most admired English-language plays of the last generation and is performed constantly, especially in former colonies of the British Empire, like Nigeria and India. This SU Drama production glows with rich performances of complex characters, especially Johnny McKeown as the conflicted son Manus; Max Miller as the sellout son Owen, who comes to realize he has lost himself; Derek Boyer Goh as the generous Lieutenant Yolland, who wants to put a benign face on oppression; and Whitney Crowder’s Maire, who would shed her heritage for a better opportunity. And Kevin O’Connor’s sound design features musical selections from The Chieftains that are resonantly keyed to the emotion in important scenes.[emptybox]

This production runs through Saturday, Nov. 23.