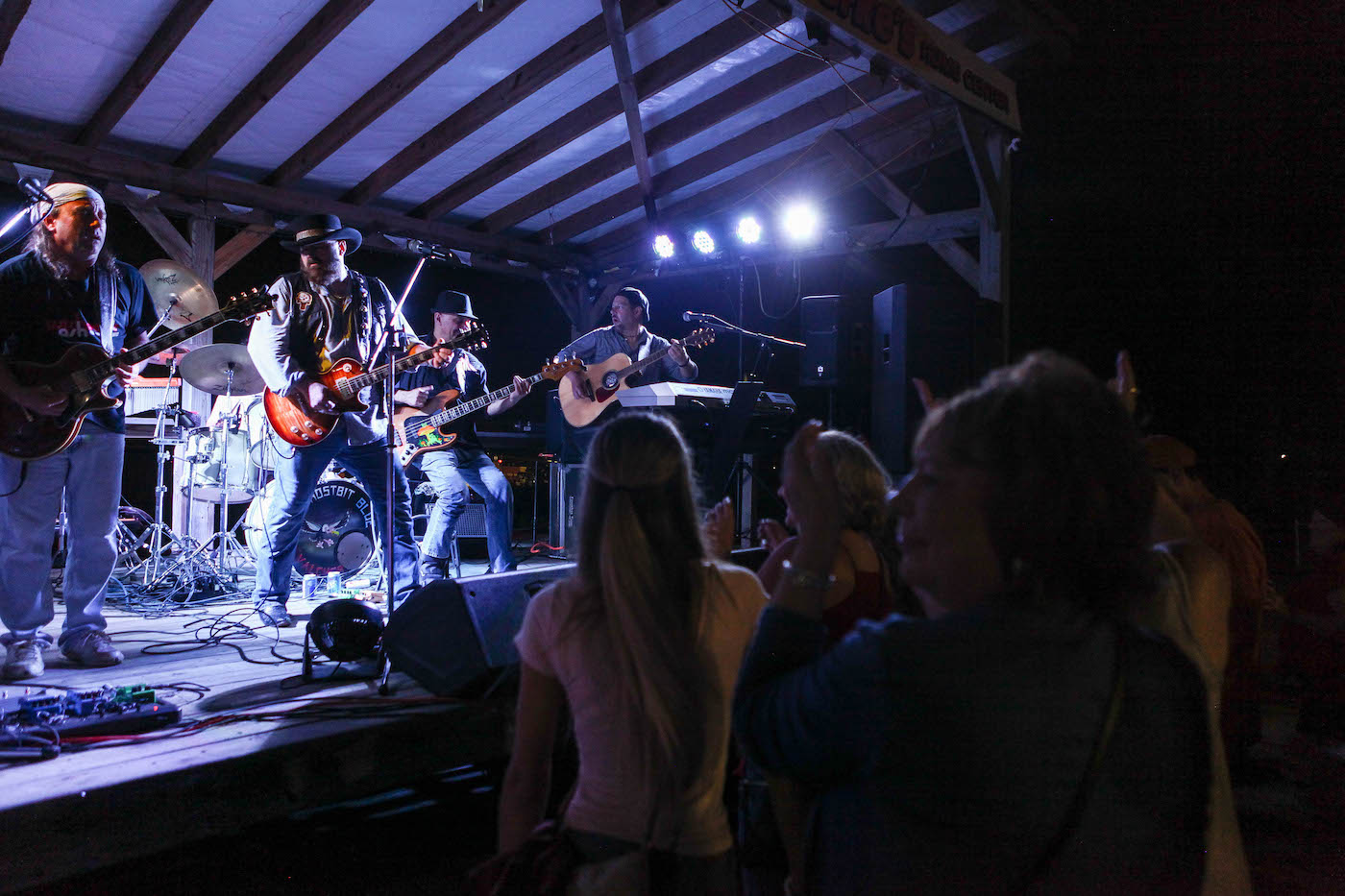 Forty years ago, teenage guitarist Tommy McCaffrey cranked out chords in the band Mind’s Eye. On the strength of its ambitious set list and its youthful fervor, the Oswego rock rookies won a talent show at the New York State Fair in the mid-1970s. Unlike most rock bands at the time, which covered The Beatles and The Eagles, Mind’s Eye covered Kansas.

A few years later and 120 miles southerly, a young Binghamton musician named Nick Gravelding was playing in his brother’s band, the cleverly named Rusty Still. After he enrolled at SUNY Oswego in 1987, Gravelding formed Frostbit Blue on campus with guitarist Erik Viel and drummer Matt Albano. In those days, Gravelding played bass, but he was already developing into a potent vocalist as the fledgling Frostbit Blue covered blues by B.B. King and Cream and dabbled in rhythm and blues. 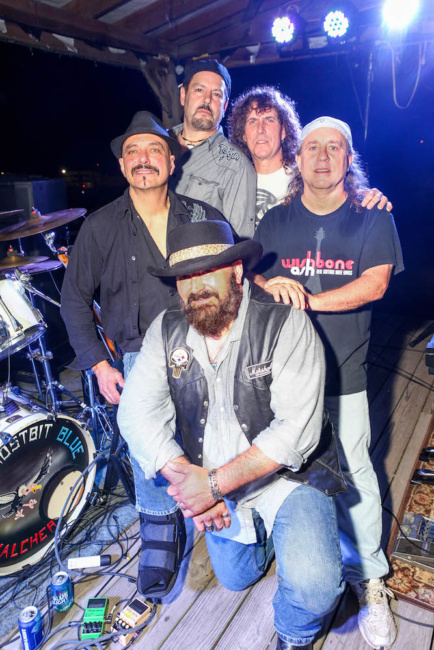 “I used to play in Frostbit Blue and Rusty Still at the same time until my childhood best friend and Rusty Still drummer, Jamie Lane, died,” he remembered. But before Lane’s untimely passing, Viel and Albano graduated from Oswego and split the scene. Sometime around 1991, Gravelding strapped on a guitar and hired Oswego townie Tom McCaffrey to pluck the bass for Frostbit.

At a July 14 evening concert staged in the paved parking lot of Lighthouse Lanes in the shadow of Oswego Speedway, Frostbit Blue sent 800 listeners of all ages to shake their moneymakers.

Place, a Fulton native who also performed with the Walking Wounded and Off the Reservation, added touches of Steely Dan and The Beatles to Frostbit Blue. “We were kind of able to mesh those two styles (when Place joined the band),” Gravelding observed. “We had a lot of Southern influence but we had some cool changes and some cool harmonies. Mike’s arranging skills are really, really good. It was a cool mixture. We weren’t completely a Southern band. We had a lot of different flavors in there.”

After negotiating “West Seneca Street,” Gravelding turned up the heat with his gritty, growling vocal on “You’ll Be Cryin,’” from the band’s 1997 CD, Just What the Doctor Ordered. After harmony choruses by Place and McCaffrey, Gravelding tossed the lead singing to Place, who ably drove it home.

Along the way, drummer John “Valcher” Bletch and bassist Benny Fiacco fueled the band’s fire with crisp rhythmic embellishments. Bletch, a veteran of the Barry James Band who also now hits the skins for the Tom Barnes Band and Vitamin X, keeps precise time while propelling Frostbit forward with his slick stick work. Bassist Fiacco, who owns a Southern Tier shop called Music City, adds a distinctive rumble to the Frostbit sound while remaining ever true to the melodies.

Gravelding introduced the next song as a new one for the band, but “Blue Sky” is an oldie for Allman Brothers fans who first heard the Dickey Betts tune on the Eat a Peach album in 1972. For “Blue Sky,” McCaffrey switched to a Les Paul so that he and Gravelding mirrored the Allmans’ twin Gibson-guitar attack while Place rose from the keyboard to strum an acoustic six-string.

The ascending guitar parts reached to the “Sky,” as did Duane and Dickey, but otherwise Frostbit Blue makes the song very much their own, especially with their inventive vocal treatment juxtaposing Gravelding’s grit and falsetto against McCaffrey and Place’s close harmonies on the chorus.

As serious students of Southern rock, Frostbit Blue naturally uses its second guitar to form patterns behind the solo rather than just comping, just as Duane Allman advised. Like Duane and Dickey, Gravelding and McCaffrey perform intricate, interlocking patterns with each other and with the bassist, the music reverberating from their open-back Fender amps. The effect on audiences is absolutely thrilling.

Toward the end of the July 14 concert, the Port City rockers again recalled the Allmans while remodulating “Jessica,” the 1973 instrumental that became an FM radio staple.

Other highlights of their two-hour set were Place’s plaintive vocals on “Stop Foolin’ Around with My Heart” and Gravelding’s rendition of Marshall Tucker’s 1975 hit, “This Ol’ Cowboy.” On both numbers, Mike Place killed on his twin keyboards. On “Cowboy,” his adventurous, jazzy, piano lines well-complemented McCaffrey’s prettily picked guitar leads. 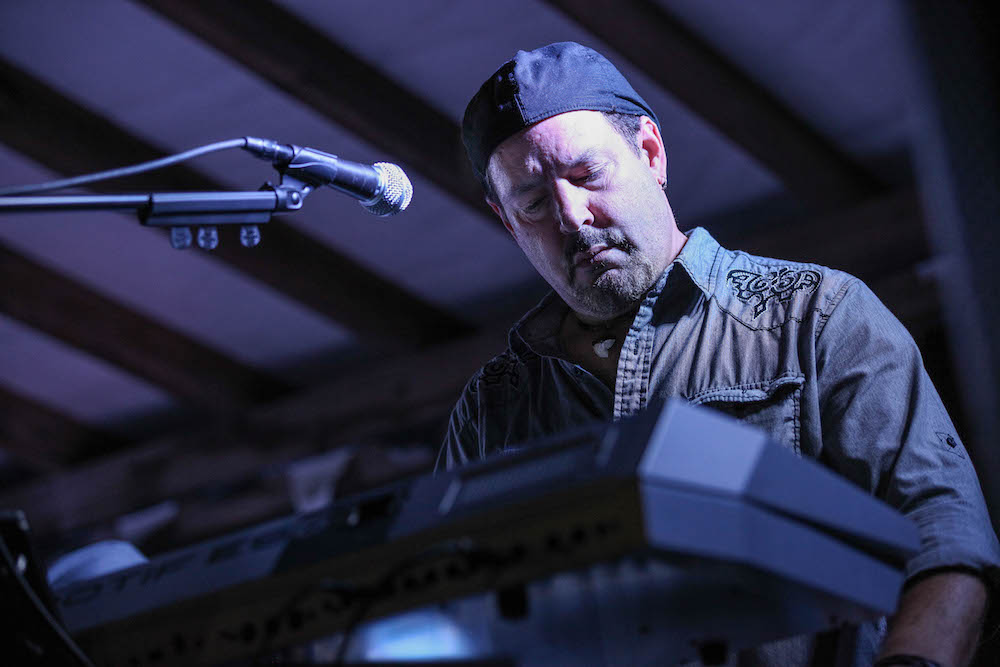 Between songs, Gravelding made a point to pay tribute to “The Wease,” the late Frostbit Blue bassist Tim “Weasel” Smith, who died in 2001 after a bout with cancer.

Like the Allman and Tucker bands, Frostbit Blue has endured the untimely deaths of several musicians and colleagues. Drummer Jamie Lane was killed in a car accident in 1995 at age 29. And keyboardist Bill Feeney, who played with Mind’s Eye and the Barry James Band, died of rheumatoid arthritis in 2011 at age 57.

For the decade-and-a-half before his passing, Weasel brought a certain verisimilitude to Frostbit Blue. An easy-going longhaired hippie in the Furry Freak Brothers mold, Smith’s bass plucking formed a solid backbone for the group’s sound.

Brotherhood, both figurative and literal, rules the world of Frostbit Blue, but so does fatherhood. Nick Gravelding still works with his Rusty Still brother, Scott, in the Gravelding Brothers Band. Scott and Nick are the sons of songwriter Austin “Rick” Gravelding, an acoustic guitarist in the John Denver mold who released two albums in the early 1970s, co-composed a few tunes with Ronnie James Dio and had one of his songs placed on a 1982 Melissa Manchester album.

Unlike his dad’s records, Nick Gravelding’s Frostbit Blue discs sold like crazy. Ice Breaker dropped in 1995, and two years later the band followed up with the more slickly produced CD Just What the Doctor Ordered, named for Corrliss Varnum, a well-fixed physician-fan who financially supported both recordings which were co-produced by the band and engineer Greg Gefell.

More than 16,000 Frostbit fans bought the two discs, which are now out of print. Thousands of those fans will fill Breitbeck Park, 41 Lake St., on the shore of Lake Ontario, on Saturday, July 29, 10 p.m., to witness the Frostbit phenomenon following the famous Oswego Harborfest fireworks display. (Admission is free. For information, visit oswegoharborfest.com or call (315) 343-6858.)

Over the years, Frostbit Blue has shared the stage with heroes such as Charlie Daniels, ZZ Top, .38 Special, Dickey Betts, Gov’t Mule and Steppenwolf. Each of the half-dozen times Frostbit Blue opened for Marshall Tucker, Doug Gray invited Gravelding to trade vocals with him on “Can’t You See.” The band reached a zenith of sorts with an opening-day set on one of two main stages at Woodstock 1999 in Rome.

But headlining Harborfest is something special. The post-fireworks show is a coveted time slot, essentially the weekend’s main-stage apogee, and it’ll feature Frostbit Blue, the pride of the Port City. 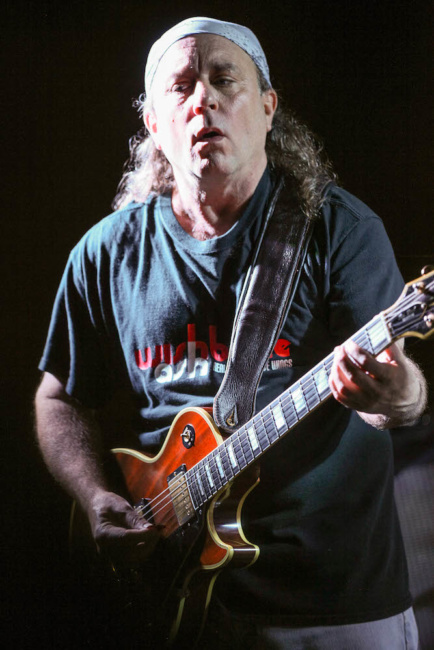 Joe Unangst, a longtime Frostbit fan from Syracuse, believes longevity pays dividends for the combo. “The key to the band is that four of the five members have played together for 30 years, and they are extremely tight,” Unangst said. “On their version of ‘Whipping Post,’ they do that lean-all-together toward the end, and that’s neat. But they’re so tight with the guitars and keyboards that it’s freakish.”

As the group’s second disc was released, Frostbit Blue won a Syracuse Area Music Award (Sammy) for best rock group in 1997, and two years later the Sammys honored Nick Gravelding as Best Rock Instrumentalist, according to the Sammys website (although Nick insists he won the trophy for Best Rock Vocalist.)

In any case, the plaudits continue to pile up this year during the band’s 30th anniversary. The Oswego Music Hall of Fame will induct Frostbit Blue on Oct. 15, 1 p.m., at the American Foundry in Oswego. The quintet will join previous inductees including Elmer Hadlow’s barbershop quartet, the Rock’n Hi Lows, Nick Sterio’s big band; jazzman Edward Goodness, rock’n’roller Sam Domicolo and educator Edward Lisk.

Nick Gravelding fully embraces the band’s Southern rock roots, but he knows there’s more to it than recycled riffs. Their audiences respond enthusiastically to the band’s originals: signature songs with attention-grabbing stop times such as “Child of December” and “Sweet Mary Jane” and, of course, “Lake Ontario Twilight.”

“We love their songs even more than the covers they do,” said Joe Unangst. In fact, Joe and his wife, Mary, consider “Lake Ontario Twilight” their song. “You know, like our romantic song that we relate to.”

Ever since he was a kid, Nick loved Southern rock. “I don’t know exactly how that happens growing up in the Binghamton area, but very much the Allman Brothers, Marshall Tucker, The Outlaws was the stuff I was good at,” he said. “We eventually ended up with two guitars, so it was just one of those things where my influences kind of influenced the style of the band.”

Allman Brothers guitarist Dickey Betts often complains about being “pigeonholed” as Southern rock. “It’s limiting,” he once told a reporter. “I’d rather just be known as a progressive rock band from the South.”

And while Frostbit Blue will always be categorized as a Southern rock band from the North, the quintet’s compositional creativity and passionate performances could certainly peg them as progressive as well. Call it what you will: It’s the music that matters.