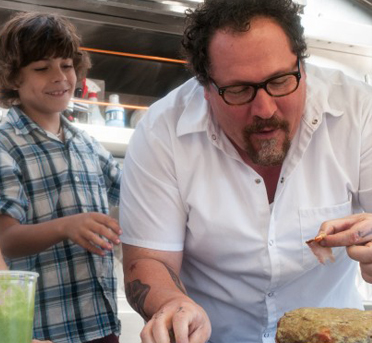 Why, hello, Jon Favreau. So nice to have you back where you belong.

Make no mistake about it. Favreau is the brain, brawn and guts behind Chef, this tasty little film about a man who built a name for himself in the culinary world but then saw it slip away, first ever so slowly, one dish and relationship at a time, and then in one horrific, mind-blowing, soul-crushing run-in.

Favreau made a name for himself as the writer and star of another little film, Swingers, which in 1996 showed the world his sweaty neuroses and buddy-building ability in the single land of Los Angeles. Of late, he’s executive produced mega films, namely the Iron Man franchise.

With Chef, Favreau is back behind the wheel and in front of the camera as producer, director, writer and star.

He’s surrounded be terrific help, in every sense of the word, to help tell a story that’s gigantically pleasing because of many small, comforting moments.

Carl Casper is a chef who toils halfway on autopilot in a LA restaurant owned by a satisfied-with-the-status-quo owner played with a sharp business edge by Dustin Hoffman. We discover that Carl’s back story: a gee-whiz Miami chef lures gorgeous and successful wife played wonderfully toned-down by Sofia Vergara and earns huge Internet review by a critic played, with convincing smugness, by Oliver Platt.

A decade to now, though, he’s divorced from Inez, struggling to make his relationship work with their 10-year-old son, played quite terrifically by wise-eyed Emjay Anthony. And that Internet critic, Ramsay Michel, is planning to visit owner Riva’s restaurant. Carl is rallying his girlfriend/hostess, a laid back but devoted Scarlett Johannson, and his top two cooks, played loyally and full of quirks by John Leguizamo and Bobby Cannavale. They’re all stoked for Carl’s specials for the night.

Riva marches into his kitchen and says, no way. Stick to what’s been putting the fannies in the chairs. Regular menu only. Carl dies a little.

After the two-star review, complete with a personal attack, Twitter newbie Carl gets into a social media war with the Internet blog king. Another special menu is set up as a chef’s challenge. The owner nixes it. Carl goes off and is fired. Blogger, seated after the exact same meal as the first review, tweets another personal noogie. Carl barges back and becomes a social media one-tirade video star, jobless, job-offer-less and lower than low.

Enter his ex-wife with an offer of a trip to Miami to watch their son while she’s on business — and a set-up interview with her rich first ex-husband — loopy Robert Downey Jr. — who hands over a 30-year-old food truck. Leguizamo’s Martin flies in from LA immediately, helps Carl and 10-year-old Percy clean up “El Jefe,” and they set off on a road trip to share Cubano sandwiches and reclaim their cooking souls.

Oh, how they shared the cultural and culinary riches of Miami, New Orleans and Austin in that spiffed-up truck. Percy works the social media world in ways that startle and thrill Carl, and Carl works that Chef’s knife and truck kitchen in a manner that captivates Percy. The in-between moments seal the deal.

When they pull back into LA, this woman who’s both an impressed mom and ex-wife awaits with open arms for the El Jefe truck and all that means.

Writer Favreau has a couple more twists for Carl and crew, and the full downstairs little theater on a Friday night at Destiny USA was buzzing about Chef on the way out, like a dinner party crowd discussing the courses of a meal well done.

It’s Greek to them, too
Don’t be Such a Prick
To Top