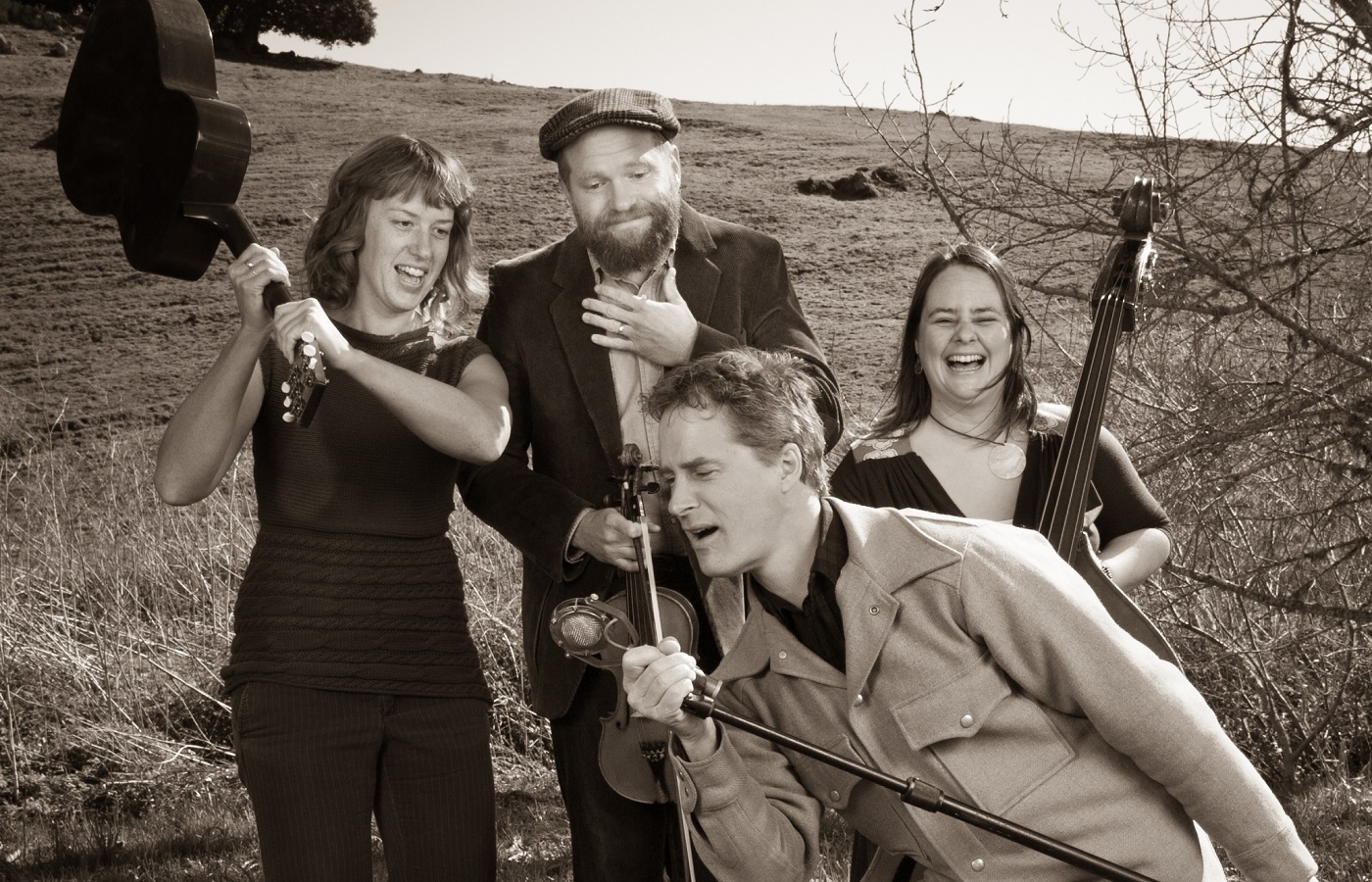 Foghorn Stringband strums its way into Central New York for another show at The Nelson Odeon.

After another successful tour in Ireland, Portland-based Foghorn Stringband has returned to North American life to continue their musical adventures. The quartet returns to The Nelson Odeon on Thursday, Sept. 8, for an 8 p.m., foot-stomping good time opener, The Railroad Boys.

In a recent phone interview, upright bass player Nadine Landry, alongside fiddle and banjo player Stephen “Sammy” Lind, took some time out of their day to talk about life on the road. The two were spending time with the Landry’s family in Quebec City before taking flight for a show in Boston. They’ll continue to celebrate their 2015 release “Devil in the Seat,” along with a mix of original and traditional renditions in the effort to showcase the power of music.

How was your time in Ireland?

NL: “It was good. This was the second time this year we were there. In June, we were there for a festival on the West Coast. This time we played a wedding, a 50th birthday party, a bluegrass and an arts festival. Every time we go, we love it even more. You don’t think you could have a better trip, but it happens again and it’s exponentially better. It gives us an opportunity to visit and get in a deeper relationship with friends and meet others.”

SL: “I think we’ve always loved going to Ireland so much because music, tradition and culture run so deep. We love being a part of that. Our music has a real place over there, and people live their lives in a way we really relate to.”

The music and storytelling aspect are very similar. Do you incorporate Irish music into your sets?

NL: “A lot of the tunes we play and name; for example we have a tune called ‘Twin Sisters,’ but it’s a well-known tune in Ireland they call ‘The Boys of Blue Hill.’ It’s the same tune … the rhythm is different, but the melody is the same. I think they recognize their music in our music. It’s probably fun for them to hear what their music is like after it has crossed the ocean … with influences of Native American and African American music.

With your independent and homegrown sound, do you feel the more mainstream bands change the appeal of these genres?

SL: “I don’t think it hinders our sound. There’s a place for us in modern music. Because we’re so traditional, it sounds really refreshing. The way we play is so vibrant and alive.”

NL: “Traditional music is being played the way we play it. Some people play the music to other levels, and it’s healthy to do all of that, but we play the old-time way. When we’re at festivals, we’ll have older people come up to us and say, ‘This is exactly how my grandparents played that music.’ We play square dances all over the country, and we played some in Ireland. Yeah, we play vibrant and real. It’s ageless.”

How did you get involved with Foghorn Stringband?

SL: “Caleb (Klauder, mandolin and fiddle) and I started the band back in 2000 in Portland, Oregon, and that was around when we first met each other. We would get together not with any idea of a band in mind, but we just loved playing the tunes together. Eventually we found a few other people … and realized we had something pretty unique.

“There weren’t too many people with drive and passion for this old type of music. There were more people playing country music and modern bluegrass, but I was always drawn to the old-old sounds from West Virginia and eastern Kentucky.

“In 2003, we went up to play the Alaskan Folk Festival in Juneau and that completely blew us away. We found our audience: A bar full of 100 people, dancing and hanging from the rafters. We’d never seen that kind of reaction.

NL: “I was there too, but dancing in the audience. I never had seen a band like that before.”

SL: “Shortly after that, we went over to Ireland. It made us work even harder and hone in what we were working on. In 2008, some band members left to pursue other life paths, and Nadine joined. After performing as a trio for a few years, Reeb (Willms, guitar) joined in 2011.” 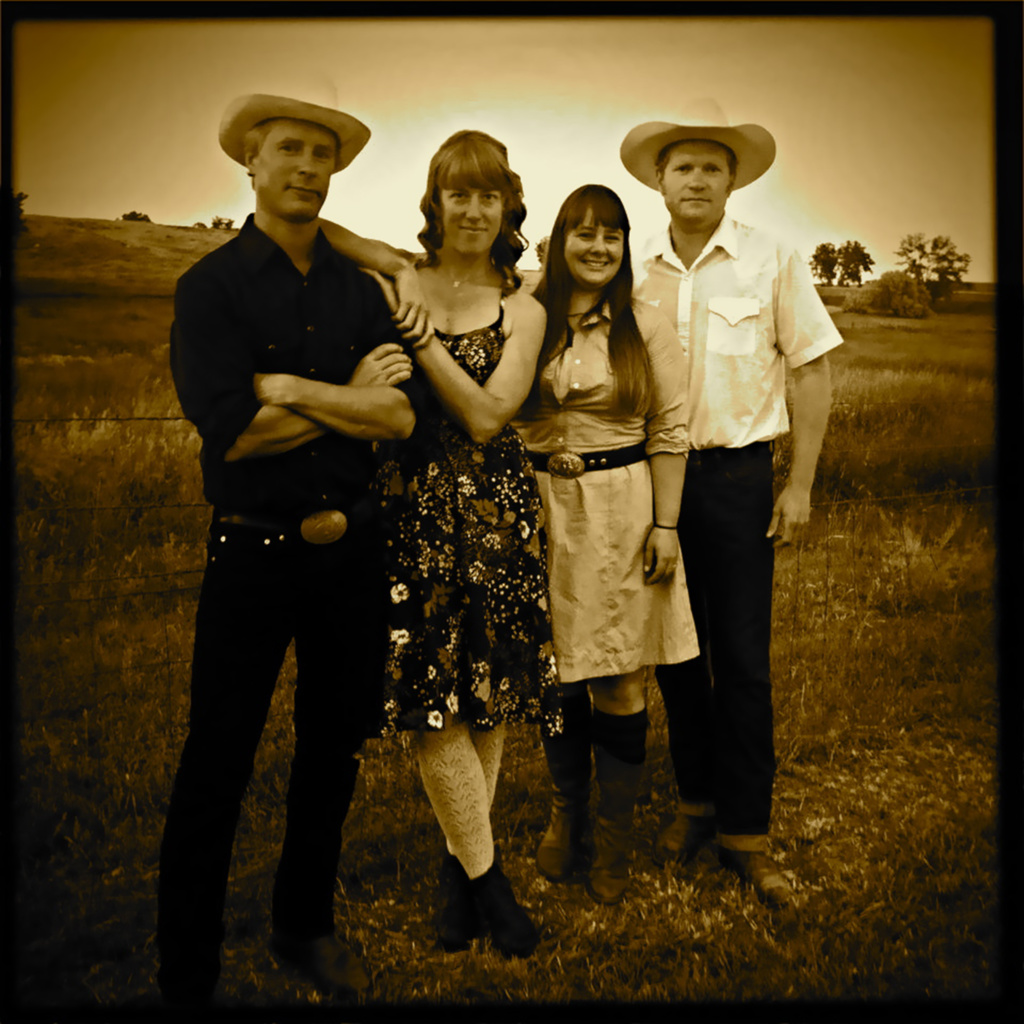 Who are some of your influences? Are you inspired by other genres?

SL: “There are a few old, non-commercial recordings to help establish our repertoire. Music that was made in the ’20s or ’30s in the South. Traditional music like the Stanley Brothers and Bill Monroe. We listen to a lot of Cajun music and Irish music, which we are big fans of but we don’t play. We all even like a lot of the more modern stuff. Even rock music, too. We don’t necessarily incorporate it in our music, but maybe it slips in there somehow.”

NL: “The level of energy we play at is the same as when we played in bands when growing up, playing in rock bands. I’m sure (Lind) channels his old band from when he was 12 years old. You can tell.

“The Carter family for songs is a never-ending catalog of repertoire. We get tons of songs from them. For Reeb and I being women, Hazel Dickens and Alice Gerrard were huge influences. They were pioneers for women playing this style of music. They stepped into the bluegrass train when there were not a whole lot of women doing that. We’re grateful, and it feels natural for us to play because of their influence.”

Talk about “Devil in the Seat.” Do you record albums with a certain concept in mind, or do you go about it freely?

NL: “We recorded it at a friend’s house in Hawaii on the island of Kaua’i. It was absolutely gorgeous. We’d go to the beach in the mornings, then record in the afternoon and play croquet at night. It was so fun.

“In four days we recorded about 36 songs. The hardest part was narrowing it down to the 16 on the record … they’re all traditional, tunes that hand not been recorded by us. This almost took longer than to record them. When we play shows, we tend to do a rotation of our huge repertoire.”

Any plans for a new album, or are you doing your own thing, not restricted to put out something new every couple years?

NL: “We’re debating whether we’ll be releasing the unreleased tracks for “Devil in the Seat.” It’s pretty easy. We record in usually one sitting, everything live.”

SL: “Sometimes we get held back a little after recording, because we play live so often. It’s about every couple years, so we’re due for a new album, maybe early next year. Something new and refreshing would be good, but we’re also excited about the stuff we do have out and future travel and touring plans.

“What it’s really about for us is playing live, making music and connecting with others.”

Is the song writing process difficult?

NL: “Caleb is definitely the songwriter. I’ve never performed something with the band that I’ve written, just ’cause I wouldn’t be too proud of it. (Laughs.) This question would be more for him, and he’s not here right now.”

Do you have any pre-show superstitions?

NL: “We try to plan the first few songs and what keys to play in. We’re all in different tuning, so that way we’ll start off in the same key. Sometimes we don’t plan and take requests from the audience. We usually end in the key of A. (Chuckles.) It’s something we’ve been doing all over, for ages. I don’t know if it’s a superstition, but it’s when Sammy cranks his fiddle strings a little higher.”

For people who haven’t seen you live, what can they expect?

SL: “We like to say, foremost, that it’s party music that we play. We focus on having a good time. You’ll hear a good mix of the traditional square dance tunes, but also a lot of the songs from the Carter family. You’ll hear an English ballad (“What Will We Do”) and Cajun songs. There are even duets done in the traditional country way.

NL: “There will be even some of Caleb’s originals as well. He writes great country songs and has another band. Along with playing his originals, we’re open to taking special requests.

“The last time we played at The Nelson Odeon, there was an older man that was there. Months later, his son got in touch with us to see if we could record a little birthday greeting for his father. Sammy and I live in the Yukon, northern Canada. Caleb and Reeb live in Portland. They recorded part of the birthday song, and so did we. After a little editing, we sent it. He was very happy.”

No Devil in the Details:

In case you miss it, they’ll be playing this weekend at …