Celebrated visual artist and filmmaker, Isaac Julien, spoke at the Everson Museum of Art in downtown Syracuse on Friday Oct. 3. On the side of the building, the museum screened “Western Union: Small Boats (The Leopard)” to kick off this year’s Urban Video Project series, “Celestial Navigation: A Year into the Afro Future.”

Julien discussed his philosophies on creating moving image art in his talk, “Choreographing the Moving Image: Post Cinematic Desire and the Politics of Aesthetics.” In his work, he tells stories through the interaction of multiple screens. 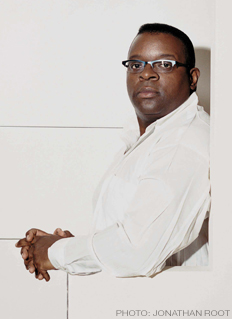 Julien was born in London, where he currently lives and works. He first rose to prominence when he was nominated for a Turner Prize for his 1999 film “The Long Road to Mazatlán” and 2000 film “Vagabondia.” Over the span of his career, he has received multiple international awards, including the Performa Award, the MIT Eugene McDermott Award in the Arts and the Frameline Lifetime Achievement Award. He has exhibited his 2010 film, “Ten Thousand Waves,” in more than 15 countries, most recently at the Museum of Modern Art in New York City.

Julien shot “Western Union: Small Boats (The Leopard)” on Super-16 mm film stock and later transferred it to digital. It first premiered at the 67th Venice Film Festival in 2007. The film chronicles a group of Libyan migrant worker’s journey across the Mediterranean seas, escaping wars and famine. Julien said the work explores the “circulation of human lives, the movement of bodies and their personal stories.” The Everson Museum will exhibit ” Western Union: Small Boats (The Leopard)” until October 25.

His latest work, “Playtime,” explores the role that the art world has played in the market. After the recession hit in 2008, Julien struggled to find money to produce his art.

He said the financial setback forced him to slow down and focus on the relationship between capital and art. “I wanted to break down people’s preconceived notions of what capital is. Most people think of capital as just Wall St. But capital is everywhere,” he said. “They don’t understand how computers have transformed capital and what is actually happening to their own capital.”

Shooting Star
Getting Reel at Syracuse Film Fest
To Top