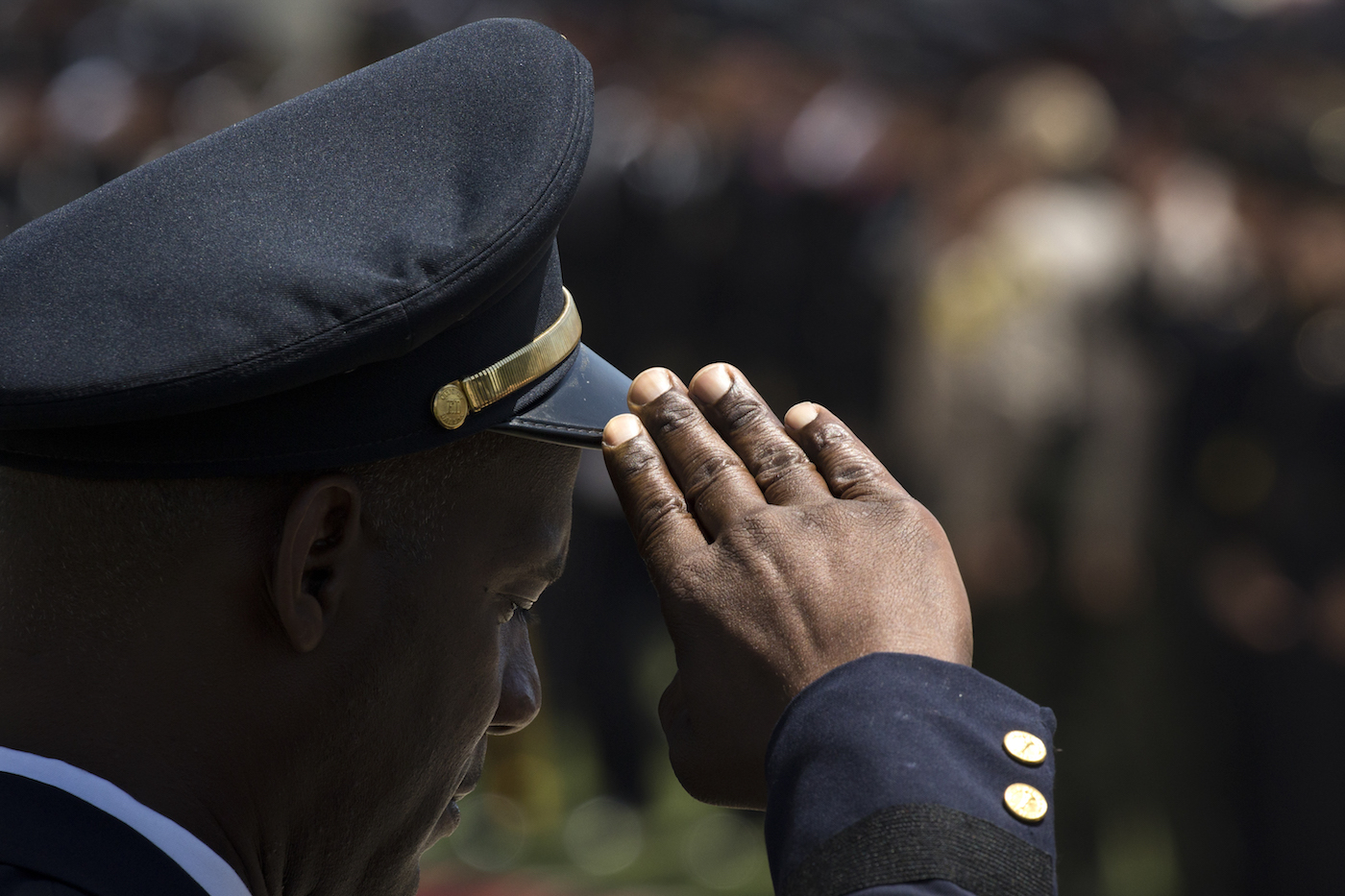 A collaborative effort must be made for change.

A Dallas firefighter salutes a motorcade escort for the coffin of Dallas police officer Lorne Ahrens, one of the five victims of the gunman who wanted to kill white police officers, after funeral services at Prestonwood Baptist Church in Plano, Texas, July 13, 2016. Photo by David Ryder of The New York Times
Share
Tweet
Share
Share
Email
Comments

The deadly confrontations between white police officers and members of the black community that we’ve heard so much about over the last few years entered a new frontier last week with the deaths of Alton Sterling in Baton Rouge, Louisiana, and Philando Castile in St. Paul, Minnesota, followed by the slaying of five police officers at a protest in Dallas just days later. These sorts of killings are no longer just a political struggle between law enforcement and enforcing law. It’s now a war. But it cannot be a war where someone wins and someone loses. Rather, it must simply end.

Five officers, each with their own impressive and honorable records as law enforcers and human beings, were gunned down in the middle of a large rally that was protesting their profession. Innocent men, one a veteran and one a newlywed, whose daily routine is to put their lives on the line every single day to maintain civil order, had those lives robbed of them by a senseless and cowardly killer.

If the attack was intended by the sniper to be a retaliation of the killings of Sterling and Castile, he accomplished his objective of evening the score — but the score is 0-0.

These officers had nothing to do with the death of Sterling or Castile. They were targeted because of a part of our human nature that often brings about these incidents and then is augmented by the public — generalization.

It’s such a simple word, but it is the foundation of both bias and racism, the very ingredients that cook up these kind of events.

It’s preposterous that we live in a nation today where an African-American individual who sees flashing blue and red lights in their rearview mirror should fear that getting pulled over could be a life or death situation. It’s vile that police officers today must live in constant fear that it may be them in tomorrow’s national headlines as the one killed in action. It is wrong, indeed shameful, that any one person can automatically say that all blacks or all police officers are “thugs” or “pigs.”

Unfortunately, there are those who give us a reason to generalize. Police officers from all walks of life have been on the wrong side of the law and convicted of crimes, ranging from possession of marijuana to murder. There are also black citizens who have committed criminal acts themselves. But the vast majority of both groups are people of good character. It’s the so-called “bad apples” that make it easy for us to play the blame game, blaming victims for not following police officers’ instructions and blaming the police for abusing their authority.

But it shouldn’t be easy. We are each individuals. We cannot allow ourselves to jump to conclusions because of the color of one’s skin or the color of one’s uniform. What this past week has shown us is that both sides, the black and the blue, have their bad apples and need to find middle ground. They both need directives put in place to remove bad apples from the batch and prevent new ones from growing.

Collaborative efforts must be made by police units across the country to ensure that deadly force is a last resort and that no officer surpasses the boundaries of their job when making an arrest. They can both work to cement views that all police officers as the good guys, like we are always taught, and that they should not be disrespected or harmed simply because they have a gun and a badge.

And that collaboration has already begun. More states and departments are requiring body cameras to be worn by officers to aid in the accuracy of recounting confrontations when split decisions are made and actions are quick, which protect both the officer and the other person or people involved. Government officials have suggested new training requirements for officers on how they handle potential heated scenarios. In response, leaders of the Black Lives Matter movement have denounced and need to continue to strongly denounce and discourage the targeting of random white officers, both to those who consider themselves a member of the movement and those who don’t. After all, it was the police that subdued the gunman in Dallas, and helped stop a shooting that could have taken more innocent lives.

The joint effort between them should actually be an easy one. Why? Because in the end, they both have the same common enemy — violence. Violence is easy and it makes headlines. But what we saw in Dallas does nothing to help what we saw in Baton Rouge or St. Paul. As Mohandas Gandhi once said, “an eye for an eye will make the whole world blind.”

Sterling, Castile and the five officers were all victims of that kind of violence. That’s not justice. And no justice for them means no justice for the rest of us. Acknowledging that is a good start for moving forward.