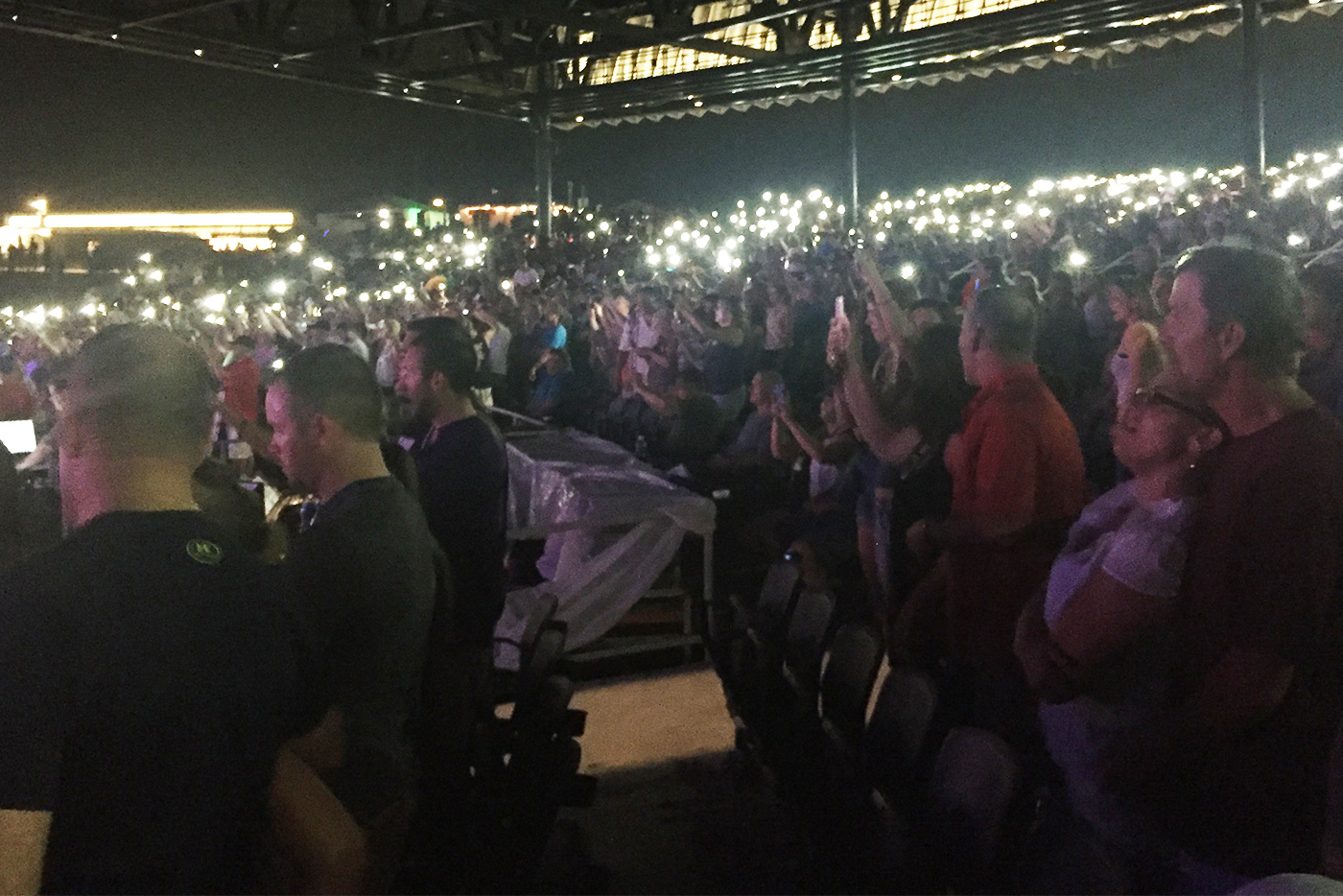 The Amphitheater played host to a doobious crew on Wednesday.

The crowd funneled into the Lakeview Amphitheater last night carrying lawn chairs and kids over their shoulders. Despite the day’s oppressive heat, they were ready to dance to the unforgettable hits of Dave Mason, The Doobie Brothers and Journey.

Syracuse was the 29th stop on the rock ‘n’ roll legends’ San Francisco Fest Tour, named for the long-standing musical connection each act has to the California city.

Dave Mason and his band was the night’s first act. A former member of Traffic who has worked with the crown jewels of rock ‘n’ roll like Jimi Hendrix, Mason packed a historical punch with each song on his set list. Songs like “We Just Disagree” were met by thunderous applause from the crowd.

For his last songs, Mason brought out Journey bassist Ross Valory, who shook his head after being introduced and bowed in an “I’m not worthy” fashion.

Mason introduced his most famous song by thanking Joe Cocker, who died in 2014, for making “Feelin’ Alright” popular enough to be recorded by over 60 major artists. Mason’s fans danced and sang as if they were his professional backup. He finished his set with the Bob Dylan’s “All Along the Watchtower.” Mason’s night was capped off with a standing ovation.

Though Journey was the headliner for the show, the clear stars of the night were The Doobies. Set up in a theatrical arrangement, with Patrick Simmons, John McFee, Tom Johnston and John Cowan in a line at the front of the stage, the eight-member band immediately radiated energy to the crowd. Starting with “Jesus is Just Alright,” the band played in front of a large banner donning an image of the Golden Gate Bridge.

Bassist John Cowan’s frantic nodding through the show was a mirror image of the Doobie fans shimmying to songs like “Black Water” and “China Grove.” People seeking more dancing space scooted into the aisles to shake and rattle before security guards ushered them back into their rows. Multiple songs ended with standing ovations from the few fans who weren’t already standing, trying to elude the view of security while they danced back into the aisle. Frontman Tom Johnston yelled “This place rocks!” before finishing the set with an encore of “Without You.”

Journey embraced its 1970s roots and went all-out with a themed stage and outfits to match. With leather jackets and vests, black jeans, and bandannas, fans sense of what decade they were in could’ve easily been warped, had it not been for the frequent breaks each band member had to take (though these were masked by solos from members like drummer Steve Smith). Most Journey fans, though, didn’t seem to mind. Instead, the crowd sang every word to every hit Journey played, including “Be Good to Yourself” and “Lights,” a song about San Francisco. Schon, urging fans to wave lights in the air, said, “Let’s light this place up like a Christmas Tree.” Instead of a sea of lighters in the air, everyone turned on their iPhone flashlights.

Despite the crowd’s engagement with Journey and lead singer Arnel Pineda’s physical engagement with the crowd in the pit — high fives and half-hugs to anyone who wasn’t too nervous to try — droves of people left around Journey’s 11th song (out of 19), presumably to escape the parking lot nightmare.

Even with more than a few empty seats, and Pineda on his third shirt of the night, Journey ended with the obligatory, ever-popular “Don’t Stop Believin’.” The last beat of the song coincided with showers and cannons of white confetti from the ceiling, creating an ’80s-themed snow globe filled with iPhone lights.