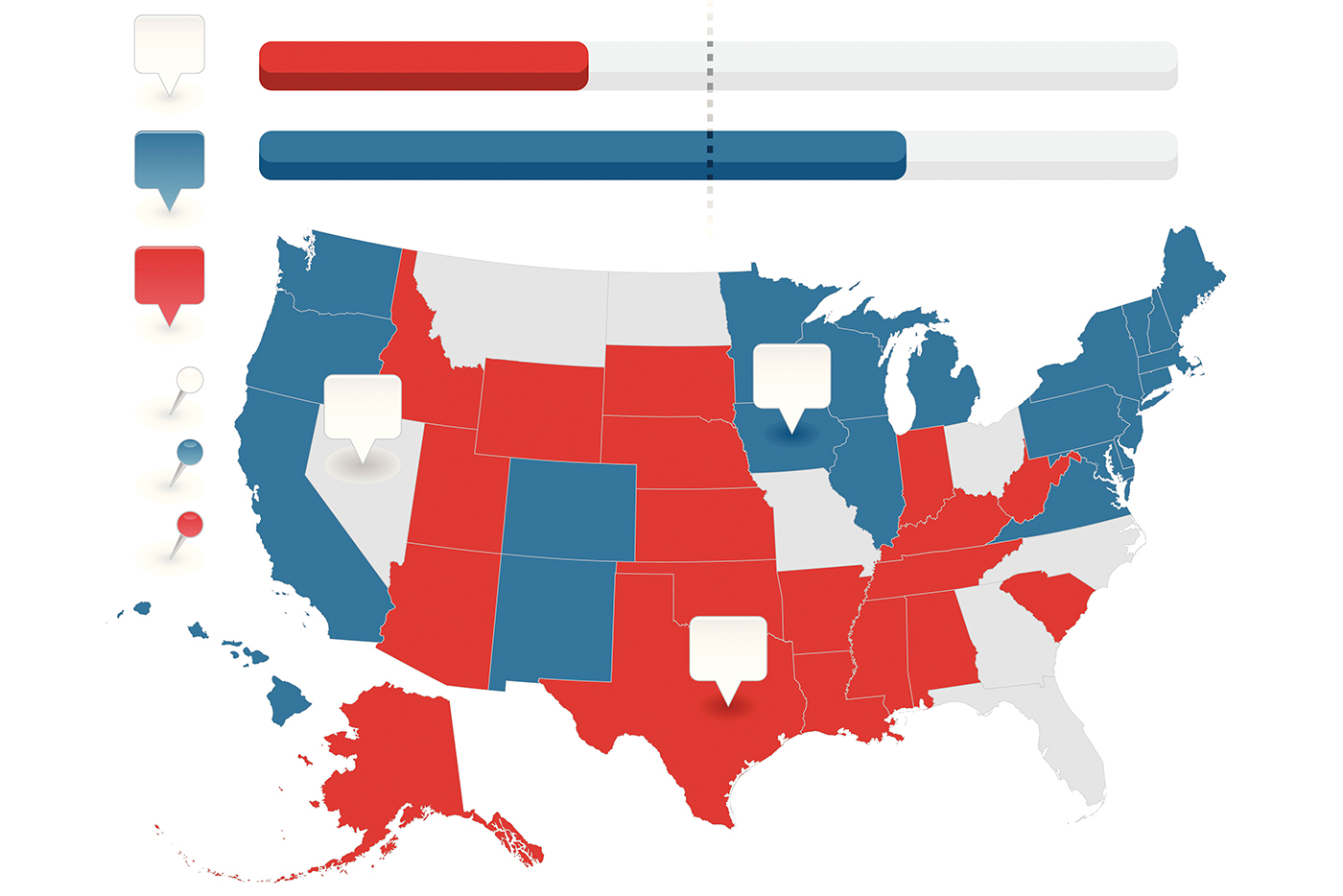 The 2016 presidential election is nearly here. Where do the candidates currently stand?

The fate of the Electoral College map tells us a lot about the U.S. every four years, and it undoubtedly tells us most when it undergoes tectonic shifts.

The collection of red and blue states has, for the most part, been locked in a solid voting pattern for nearly 20 years. Since 1992, the winning presidential candidate has won about half of the states and their electoral votes, a far cry from the landslides of the 1970s and 1980s, when Richard Nixon and Ronald Reagan both won every state except one and the District of Columbia in their re-election bids.

Barack Obama turned parts of the map upside down when he was first elected in 2008, flipping Florida, Ohio, Iowa, Colorado, Nevada and New Mexico, all states George W. Bush had won twice, with the exception of New Mexico, which Al Gore carried in 2000. Two days after the election, it was finally declared Obama had also carried North Carolina with a razor thin 0.32 percent margin of victory, the first Democrat to win the state since Jimmy Carter in 1976. High African-American voter turnout also prompted Obama to narrowly carry Indiana and Virginia — both of which hadn’t voted for a Democrat since Lyndon Johnson in 1964. Indiana and North Carolina returned to the Republican column in 2012, but not Virginia.

Republicans hoped the Old Dominion’s new love affair with the Democrats was only temporary. While Virginia was viewed as a battleground state early on, Hillary Clinton has pulled away over the last few months — currently leading by 12 points. It is also Tim Kaine’s home state.

If Clinton wins Virginia, and it looks like she will, it will be an addition to the list of states that the GOP could once count on to win and now struggle to even compete in. It’s becoming much tougher for Republicans to win the White House now that Democrats have been slowly making deep inroads into each of their regional strongholds — the South, Southwest and Midwest. Virginia is turning blue. Should North Carolina flip again in 2016 for Clinton, it might also be on its way out as a modern swing state. A must-win for Donald Trump, Clinton also leads there.

Then there’s the unthinkable. The Clinton campaign has made an effort to bring out the black vote as a way to flip traditionally red Georgia. Ross Perot’s participation helped her husband carry the state once, and an Atlanta Journal-Constitution poll shows Trump and Clinton in a dead heat. Realistically, it will probably still go for Trump, but even a close race there is enough to scare Republicans for 2020 and beyond.

While Clinton country extends south, it is the Southwest that may supply the biggest surprises on election night. It is more than possible that Clinton could actually win two states that represent conservative America at its core. In what may be the most shocking part of this election yet, many news organizations have declared Utah, home of the Mormon Church, as a tossup state. The reason? A state poll reported by The Deseret News shows Trump and Clinton in an even tie — the result of a surge by independent candidate and Utah native Evan McMullin — who polls just four points behind the major party candidates.

The split Republican vote could potentially hand the state’s six electoral votes to Clinton — a state that Mitt Romney won by 48 points in 2012 and has voted for a Democrat only once since the 1940s. Perhaps even more unprecedented is that in one poll, McMullin leads Trump by two points, meaning he could actually win the state himself. The last time a third party candidate won any electoral votes was when George Wallace swept the Deep South in 1968.

While either of those scenarios are far-fetched, the idea that a possibility exists is remarkable. Where it isn’t so far-fetched though is in adjacent Arizona. Recent tighter polls have prompted the Clinton campaign to spend $2 million in TV advertising and send Michelle Obama and Bernie Sanders to rally in the Republican bastion. FiveThirtyEight actually gives Clinton a 55 percent chance of winning the state to Trump’s 44 percent. A Democratic win in John McCain’s home state, a place they’ve won once in 68 years, would be an absolute humiliation for the GOP.

Trump faces a lot of closed roads to the 270 electoral votes needed to win. He initially planned to break Obama’s “Midwest firewall,” using his strong trade deal arguments to appeal to working class voters in Michigan and Wisconsin — both states Clinton lost in the primaries and appeared vulnerable — but both have been Democratic fortresses for 30 years and Clinton holds leads in both.

Trump still has the potential to shake up the map himself by turning Obama states red. He looks more likely to bring Iowa back to the Republicans and has a good chance of winning one of Maine’s electoral votes — which has never been done since the state’s special process was enacted. He has also come closer to winning Pennsylvania than any other recent GOP candidate, but again, that is a long shot. A meaningful Obama upset would be if Trump were to win Ohio. He has kept a consistent lead there, though it has narrowed in recent weeks. His appeal to Rust Belt citizens there might be enough for him to squeak out a win. Even if he does, the popular saying “no Republican as ever won the presidency without winning Ohio” may be made void after 2016.

These possible changes in the electoral map are exactly what many Republicans have been fearing: that Trump’s candidacy may result in not just a loss, but a Clinton shutout, rout, debacle; whatever you want to call it.

Nothing can be guaranteed. 2016 has gone against every political rule book we know and has gotten more unpredictable by the day. And just like these candidates, just like this campaign, election night may also end up being unlike anything we’ve ever seen.