Driscoll and Kouyate will headline a show on Friday, Aug. 22, 8 p.m., at the Westcott Theater.

So many musicians and bands fall victim to “trying too hard,” by pushing flashy vocals, lyrics and instrumental licks as they flit in and out of genres. But Joe Driscoll and Sekou Kouyate push musical boundaries by not trying too hard.

By allowing each other to speak their respective languages, literally and musically, without excessive flash or flair, they achieve something greater. The music on the duo’s CD Faya (Cumbancha) is real, enveloping and truly stands on its own. 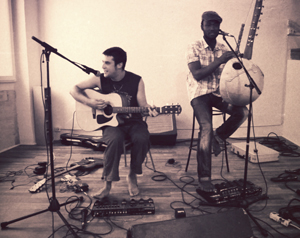 While Driscoll is a well-known Syracuse hometown hero, Kouyate is from the West African country of Guinea. The two, who met at a 2010 festival in Marseilles, France, were forced to communicate through music. “He doesn’t speak any French, and I speak no English,” Kouyate is quoted on joeandsekou.com, “but through music, we understand.”

Their meeting led to the formation of a band, recording an album and more than 120 concerts throughout Europe. Their unique combination of rapping, beatboxing, looping, multilingual songwriting, as well as their respective prowess on guitar and kora, has garnered attention throughout the world.

The kora is a 21-string harp made from calabash (a gord-like vegetable), cowskin and a hardwood neck. The West African instrument has been modernized by Kouyate’s use of pedal effects and virtuosic playing.

Faya’s cultural odyssey combines Afrobeat, soul, funk and rap in a way that makes complete sense to the ear and the heart. The themes come across, even when the words are foreign. “Lady” stands out as an irresistibly catchy love song, luring a lady in with charm (“Hey lady, I’ve got you on my mind, mind, mind, yeah”), while “Ghetto Many” discusses questions about society.

But the words that speak most clearly are those musical notes from the instruments, specifically the kora that Kouyate makes sing in revolutionary ways. His deft fingerwork reminds that there is so much to learn in a world this big and that music truly is a universal language.

Driscoll and Kouyate will headline a show on Friday, Aug. 22, 8 p.m., at the Westcott Theater. Fellow pond-jumpers Sophistafunk open with their signature Syracuse funk-infused hip-hop.