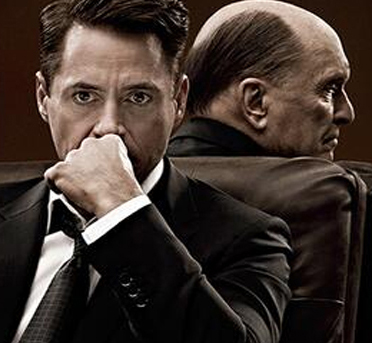 Watching The Judge is a lot like going back to a family dinner after decades spent consciously deciding, again and again, that you can’t sit at the same table with a relation who’s done you wrong.

Or so I imagined, again and again, through the 141 minutes of the tense story written by Nick Schenk and Bill Dubuque and directed by David Dobkin at the surprisingly slightly attended RPX theater in Destiny USA Friday night.

Robert Downey Jr. plays Hank Palmer, a man who fled his sleepy little Indiana hometown for Chicago. Robert Duvall plays Judge Palmer, his father, a patriarch who casts a big shadow not only over his three sons but that entire town for which he’s sat on the judicial bench seemingly forever, deciding who goes free and who looses that most precious privilege. For the record, it’s Joseph Palmer. But even his sons call him Judge.

There are other terrific players in this compelling drama. Older brother Glen, in high school a baseball pitcher with an arm that the Judge deemed full of major-league potential until an awful injury, is done well by Vincent D’Onofrio as he mutters and muses and makes the best of the heavy thumb and unfulfilled dreams. Younger brother Dale, always just a bit off and still an enigma, is also done well by Jeremy Strong as he walks around with a film camera and stammers an incorrect litany of saints’ names for stressful situations. Hank’s high school sweetheart Samantha Powell never left, and Vera Farmiga plays her tougher and smarter but still sweet. Hank’s daughter Lauren watches her parents’ relationship crumble with an eye way wiser than her elementary school-aged years, and Emma Tremblay plays her without any annoying child actor traits at all. Visiting D.A. Dwight Dickham – best prosecuter’s name ever, maybe – and small-town attorney C.P. Kennedy are all hard edges and soft corners, supplied in short but pleasing doses by veteran Billy Bob Thornton and hot buzz newcomer Dax Shepard.

An impressive collection, surely. And yet the sun rises and sets around the chemistry between Downey Jr. and Duvall, Duvall and Downey Jr., an actor who’s developed a thick crust over the decades that makes you search, search, search for that soft spot inside as he works as hard as ever at age 72, and an actor who appears to acquire a new angle to explore each role he accepts in middle age as he approaches his 50th birthday on April 4.

In short about this long movie: Hank Palmer is working to get another white-collar dirtbag off in the high towers of Chicago law when he takes a cell call right there that his mother has died. He gets the robed judge to delay that case, drives home to briefly skirmish with his beautiful but philandering wife, explain his departure and deep-rooted dislike for her grandpa to his beloved daughter, and skedaddles home for his mom’s funeral.

He and his brothers embrace. He and The Judge cast wary eyes. Old patterns return quickly.

Hank is relieved as he gets on the plane to go back to Chicago. His cell rings, and it’s a call from Glen. That dent they saw in The Judge’s front bumper that caused the most recent argument just before he left this morning? He better get the hell off the plane and to the police station.

And for the next two hours of big theater time, a son must defend a father who doesn’t want his help. But really, does. And a son must work so hard to defend a father he doesn’t want to help. But really, does. And so they spar — or is it dance? — through reality, rehash the past, stare at the present and contemplate the future.

Both Hank and The Judge are tough bastards.

It’s like going back to a family dinner after deciding time and time again to stay away and discovering — painfully — that you’re not so different than that person you’ve been avoiding all this time.

Or so I imagine.