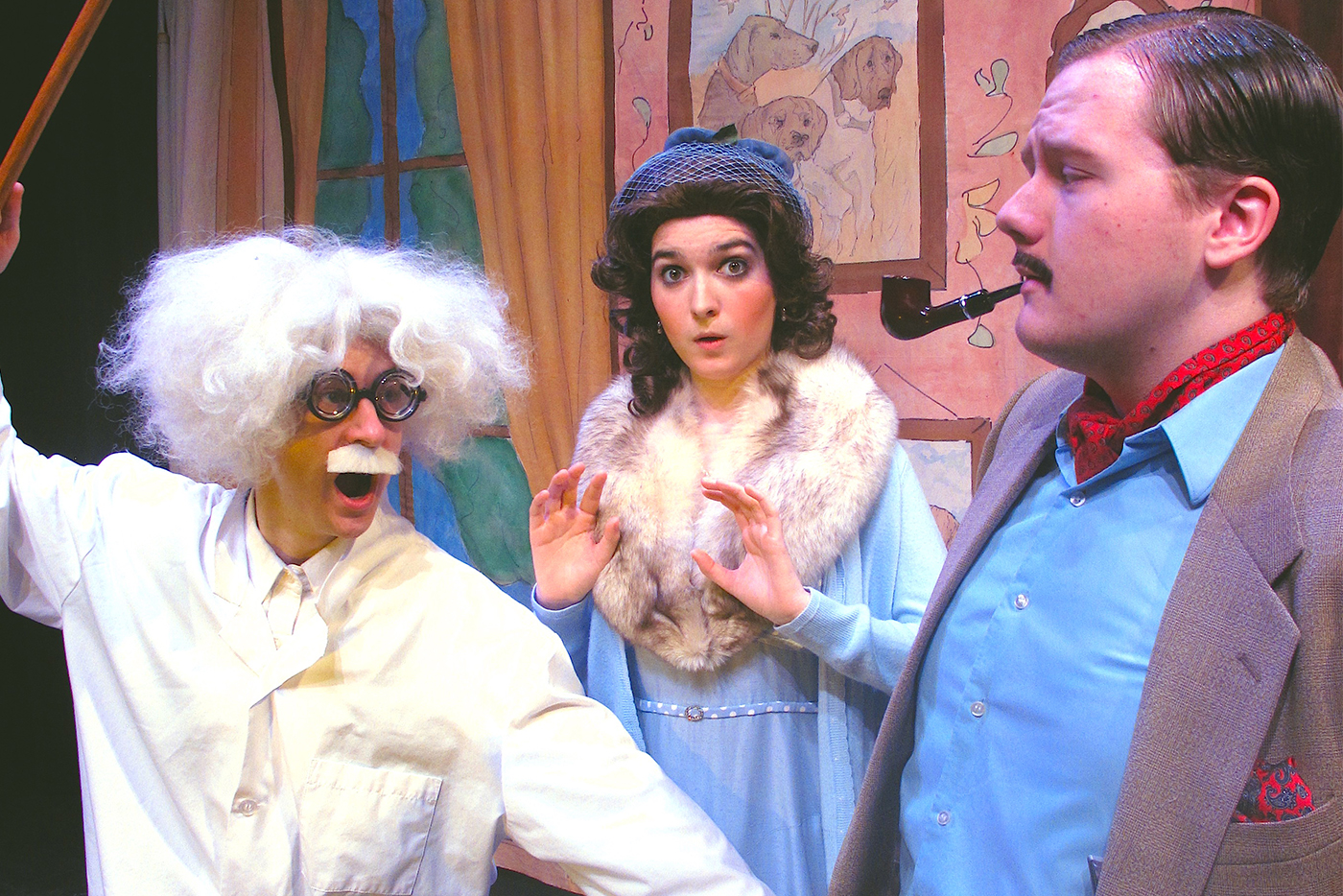 You don’t have to know much about Bulldog Drummond to get a kick out of the fast-moving British-sounding spoof Bullshot Crummond, performed by Le Moyne College’s Boot and Buskin Theatre Club.

Kind of a bridge character between the keenly observant Sherlock Holmes and the foreign intriguer Jason Bourne, Bulldog Drummond originated in English pulp fiction during World War I and flourished in a dozen-plus British and American movies from the 1920s to the 1960s. Drummond was usually portrayed by suave, self-confident actors like Ronald Colman, Ray Milland and Walter Pidgeon. But he is not identified with any single face, such as Basil Rathbone or Matt Damon.

Bullshot Crummond focuses on the peak of Bulldog’s popularity, about 1930, when lingering paranoia from the First World War meant that villains should speak with German accents. Bullshot anticipates and still resembles Patrick Barlow’s The 39 Steps, a spoof of the 1935 Alfred Hitchcock movie that made a big splash at Syracuse Stage in October 2010. What we see here premiered in San Francisco in 1974, a collaboration of five writers most of us have never heard of before: Ron House, Diz White, John Neville-Andrews, Alan Sherman and Derek Cunningham.

The nearly two-hour script calls for five players, some in multiple roles. So it appears each writer wrote his own role, each with a prime shtick, not unlike the Compleat Works farces on Shakespeare or American history. Action does not have to make sense, only to facilitate gag placement. The Compleat spoofs also originated within the orbit of San Francisco, albeit more than a decade later.

What makes Bullshot different from its near relatives is its being defiantly low-tech. Birds shot from the air zoom down on shamelessly visible wires. In car chases both the pursued and the pursuers crouch behind painted, two-dimensional sheets of cardboard.

What the quintet of authors and director Matt Chiorini are doing is not simply mocking the self-important shenanigans of a bygone pulp-adventure series but also the artistic pretension of the cinema itself. Not for nothing is each patron issued 1950s-style 3-D glasses upon entry. All those tricks that the camera enhances are deflated and exposed when recreated before our eyes.

Set designer Karel Blakely has reconfigured the open Coyne Center stage with an ornate, gold proscenium to remind us we are being taken back in time. On a scrim Blakely projects title cards and posters from period Drummond movies, perhaps as generous mash notes.

Action begins with a blurry black-and-white film of a biplane in trouble. Two passengers parachute to earth: bald-pated Otto Von Brunno (Jim Maxwell) and his diminutive daughter Lenya (Siobhan Shea) in lethal-looking spike heels. They are in pursuit of Professor Fenton, who has the formula for excellent artificial diamonds (not Zircons), which will help the father-daughter duo control the precious-gem market.

The nasty Krauts shake around the white-wigged professor (Alex LeBlond) like a rag doll, so violently that we can barely make out the actor’s face. This is unmistakably director Chiorini’s plan: LeBlond will play nearly every supporting role. And even though he cuts a distinctive figure, the humor works better if it takes a minute to recognize him at each entrance. LeBlond makes the most of this, earning some of the best laughs when the script has not always been generous to his different roles.

Such skullduggery as the Von Brunnos’ proposes calls for the talents of Bullshot Crummond himself (Fred Pienkoski), with mustache, fedora and pipe. Directors of student productions always have to work with the troops who are already in the program, and they don’t take on a project unless they know they have the right people for the key roles. Pienkoski brings elements of Don Adams’ Maxwell Smart fused with Falstaff.

The difficulty that director and actor face in creating this characterization is that Bullshot is a moving target. No easy-to-parody Sean Connery accent to spoof as with a younger James Bond. Instead the object is to mock Bullshot’s know-it-all superiority, his claim to brilliant perceptiveness of detail. Not to give away too much, but everyone in the audience will see red-hot clues that escape Bullshot’s attention.

Because the original Bulldog Drummond was a man of action, a veteran of World War I bored with the peace, Pienkoski is called upon for quite a bit of physical comedy, once clenching a stick of dynamite in his teeth. That’s also why we need the 3-D glasses. The actor is a big guy capable of spinning around on a dime, or make that a sixpence.

The script allows more physical comedy to male players but does not give the women as much to do. In one of his best scenes, Otto Von Brunno (Jim Maxwell) engages in shady dealings with an Italian gangster named Salvatore Scalicio (also Jim Maxwell). As Salvatore wears a black wig and red suspenders there’s a second or two where we don’t realize they’re the same players. When we do catch on, Chiorini has Otto and Salvatore conduct business behind a screen with teases that one or the other can be visible within seconds of each other.

Tall, willowy Rachel Crumley as Rosemary Fenton, the scientist’s daughter, is stuck with some non-PC ditziness, more fitting of Benny Hill than the kind of Monte Pythonesque flavor of Bullshot. Honorably, she hits the mark with every line, never coming off as superior to them. Similarly, Siobhan Shea’s Lenya is a mean little witch, serving her lines with acid.

Bullshot Crummond, made into a failed movie in 1983, is making an area premiere. It’s served live and fresh with Le Moyne College’s Boot and Buskin players.