Loren Barrigar and Mark Mazengarb first met in 2005 when Mazengarb was still working toward his degree in classical guitar at the University of North Carolina. Barrigar had been playing since he was 4 years old, first performing at the Grand Ole Opry in Nashville at age 6, the youngest player to do so. But the meeting with Mazengarb sparked something new.

The two met again in Nashville in 2009 at the Chet Atkins Appreciation Society (CAAS) convention. Since then, they’ve worked their “way up the pecking order” as Barrigar says. Barrigar and Mazengarb now maintain a schedule that has them playing major theaters around the globe. This year they’ll hit Florida, Kentucky, Indiana, France and Germany. 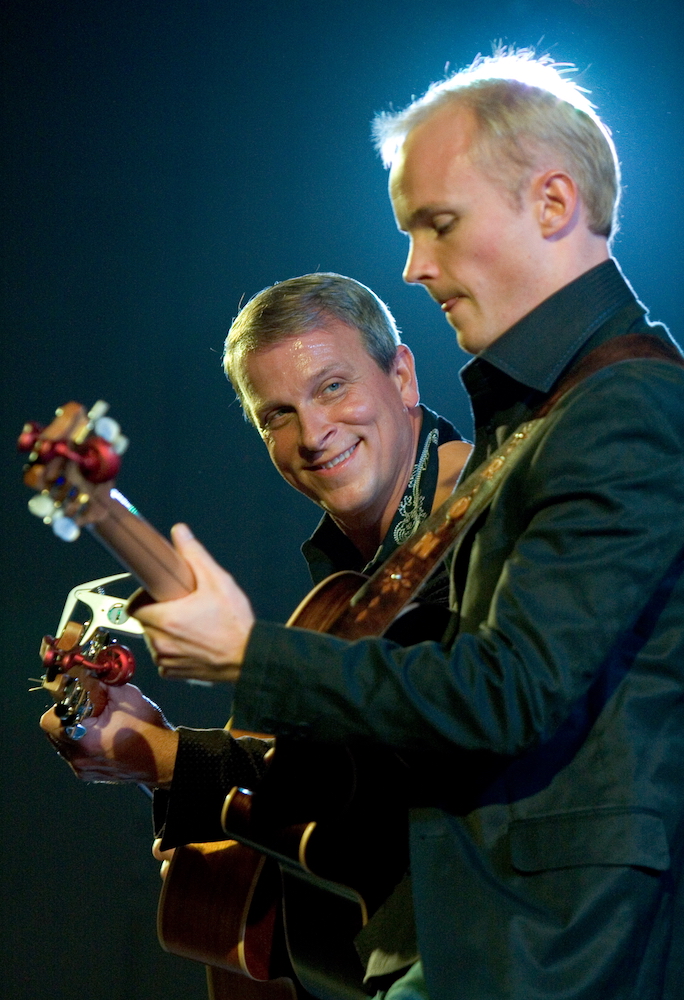 Their latest CD, One to One, mixes concert favorites with new originals. The duo will host a CD release party at Pensabene’s Casa Grande, 135 State Fair Blvd., on Thursday, Feb. 25, 7:30 p.m. (Tickets are $15 in advance, $20 at the door. Visit lorenandmark.com for details.) Alex LaVon will join on upright bass with drummer Brendan O’Conner and Joe Davoli on fiddle.

“We sell a lot of CDs, so some songs are favorites from the live show,” Barrigar says about One to One. “Then songs like ‘Coquette’ we play every night before we go on stage. We thought, ‘We love playing this. We should record it.’ Half are songs we do in the show, half are songs we just really like. We’re not out to win a Grammy. We just like to have songs we really like playing from our heart.”

“Your Song” by Elton John and “You Are the Sunshine of My Life” by Stevie Wonder are on that list, and it shows through in the album performances. Barrigar and Mazengarb’s intricate guitar work is equally astounding technically as it is pulling emotionally, a difficult balance that they seem to maintain naturally.

Yet the album displays more than the duo’s usual effortless talent. Rather than record again locally at SubCat Studios, they traveled to Nashville’s Slack Key Studios, where Randy Kohrs, an accomplished writer and performer, now handles the studio side of the music business.

“We’ve been poking around Nashville for the past four years,” Barrigar notes. “We thought we’d make some more inroads and connections in Nashville and do something different. There was no big plan, really, just that. It felt funny not doing it at SubCat because we have such a great relationship there, but we talked to Jeremy (Johnston, an engineer at SubCat) and he said, ‘I think it would be really good for you to do.’”

The duo recorded One to One in four sessions on Oct. 10 and 11, 2015. They also enlisted the help of several Nashville musicians, chosen through recommendations by fellow guitar masters Tommy Emmanuel and Richard Smith.

“The names on the album are the names they came up with,” Barrigar says. Among them are Brad Albin on upright bass and drummer John McTigue. Fiddle player Tim Crouch came later.

“We wanted fiddle, but the guys we were looking for weren’t available,” Barrigar says, so Kohrs recommended fiddler extraordinaire Crouch. “It turns out he records from home and we were flying right there in the next few days. So we stopped by his house and he’d run through a song three times in 10 minutes with three different parts and ask us to pick. They were all great.”

The result is a fluid combination of guitar and fiddle mastery. “People listen to this, a guitar album, and say, ‘Who’s the fiddle player?’ He can play and play,” Barrigar says with a smile.

The duo will also perform at a Folkus Project show on Friday, April 15, at May Memorial Unitarian Universalist Society. In June, they’ll head for Europe and their schedule will continue to accelerate throughout the fall when Mazengarb, who currently lives in New Zealand, is back for a longer period.

“We play in bursts,” he says, “and we don’t really practice when we’re apart. Mark is so brilliant and young and quick; he said he didn’t play at all over six weeks when he got married. I have to keep my muscles trained. He doesn’t seem to have any trouble. If I put it down for a week now and then, I think I come back with a little more creativity or freshness. But when we’re on breaks like this, it comes out more. We take chances a little more.”

Barrigar also says fans can expect new medleys, vocal songs and original music in the future. “Right now we’re about 25 percent to 30 percent vocals in a show,” he says. “People can only take so much guitar in a show, unless you’re Tommy Emmanuel. People can listen to him all night. I’m not a singer, so I have to be more of a storyteller. It has to be a story I really believe in. And Mark has been hitting some nice harmonies. We’re also working on new originals. There’s a strength in them we need to keep exploring. People like the feel and sound of the originals. We’re staying creative.”

Divine Doofs in Sleuth Spoof
Oh, How ‘Sublime’
To Top