I have previously reported that UFO sighting reports have been on a steep decline for three years. 2018 is continuing this steep dropoff.

I have previously reported that UFO sighting reports have been on a steep decline for three years. 2018 is continuing this steep dropoff.

Please note that I said “UFO sighting reports” and not sightings. I’ve been getting considerable mail that sightings are still up in North America and in Europe. It just seems that folks aren’t showing an enthusiasm for reporting their recent sightings. One UFO researcher commented, “We see so many, who has time to report them all!”

After my last report about the decline, I observed two things. One was a volume of mansplaining why this decline is occurring. The other was a host of copycat articles being posted, some with the most absurd numbers.

The numbers in this article are a snapshot as of Sept. 20. Keep in mind that people do report sightings years after the event. So a sample I take today might be off by 50 or 100 for a particular year, if I sample three to six months from now.

I’ve come to understand that the UFO sighting report databases are, in a sense, living documents and seem to have a creeping growth. If we were studying farm reports or the census from a particular year, the numbers, for the most part, are solid with a small margin of error. So please keep this in mind when I do a year-end report because the numbers may be slightly different. 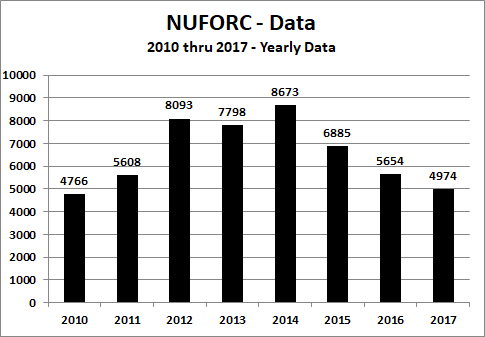 Yet if we examine the first eight months of the past six years, including 2018, except for a spike in 2014, we generally see a steady downward trend. Where it will all settle out is anybody’s guess. 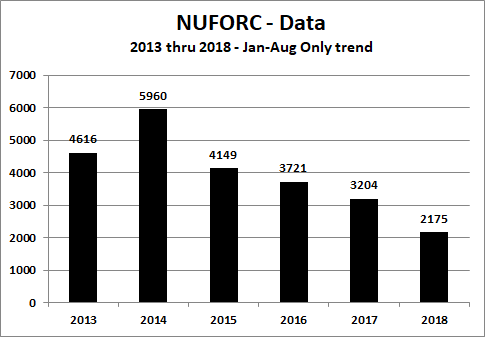 But let’s consider some of the possible reasons that have been offered by many readers. Some blamed the announcement of Space Force; sorry, the declines in reports started four years before the announcement.

Others blamed too many people with their heads down and focused on their pads and phones. Maybe.

Quite a few people suggested that the ETs may have run out of interest (or perhaps galactic grant funding) to continue their studies here on Earth. Still others expressed boredom with reporting UFO sightings, especially since Disclosure seems to be stalled. The mood was “Why bother?”

Some suggested that there’s a general apathy in the country given our chaotic political situation. Finally, there are many who wonder if the falloff in UFO sighting reports is the calm before a storm. Who knows?

End of the road for Cuomo’s ‘I Love NY’ highway signs (opinion)
NY exodus crisis isn’t over, despite what Cuomo suggests (opinion)
To Top