To the guy outside the bagel shop last Wednesday morning: You are my new hero.

I heard what you said to the girl who had just backed into your car. I saw it in slow motion: her hopping into her car, you pulling up to let your daughter out and then her car gliding out of its parking spot. I heard the crunch of metal as the back of her SUV bumped into your Corolla.

As I went by while you were still in the driver’s seat, deciding how to respond. Your door opened, you stood and turned toward the girl, who couldn’t have been half your age.

“I’m so sorry,” she said as she hopped out of the car, keys in one hand and coffee cup in the other. She said it like she meant it, and she was scared.

You two spent a few minutes squatting down and looking at the damage. You probably ran your hand over the dent, calculating the repair costs, wondering if it covered the deductible. You took care of business.

But that wasn’t the important thing. Somehow you managed to take care of this young lady, who had just done a careless thing.

You somehow gathered the strength to be kind.

It was a year ago that George Saunders gave a powerful commencement address in the Dome, an 11-minute speech that has been viewed more than 100,000 times online. His theme, echoing Kurt Vonnegut, was the importance of kindness. The man at the bagel shop may not have heard the speech, may not have ever been to college, but he understood.

We don’t always summon the strength to be kind. I know I don’t. Saunders in his brilliant speech (you can see it above) rolled out some thoughts on why it can be so difficult. Here’s why it is important: because we never know when kindness is especially needed.

A year ago, I was in Home Depot. To all the world, I looked like just another confused homeowner working out a project in his head. But the project was especially significant; I was selecting the wood to make a box to bury our dog, Pete, who was lying at home with the kids, in his final hours. I was barely holding it together, and in my confusion, I picked a piece of plywood off someone else’s cart.

I started toward the front. Then I heard footsteps. I can still hear them. It was the man, probably a contractor, who had picked out that very piece of wood. He moved fast, and his boots cracked against the concrete floor. He meant business. He didn’t say a word, but when he grabbed that plywood, reclaiming it, I could feel the whoosh of air and along with it his anger, his contempt. I can still feel it a year later. I tried to apologize, but he had no time for it.

Couldn’t blame him. He was trying to finish a job, and I was just some jerk costing him precious time. But he was wrong. I was a jerk who was struggling against an ocean of sadness.

Like Saunders says, it isn’t at all easy to be kind. There are times, he says, like the birth of a child or the death of a loved one, when we get our priorities straight and kindness appears as the logical choice. Those moments fade, and then we are back in the aisle at Home Depot, or in the parking lot at the bagel shop.

And sometimes, in spite of ourselves, we summon the strength to be kind. 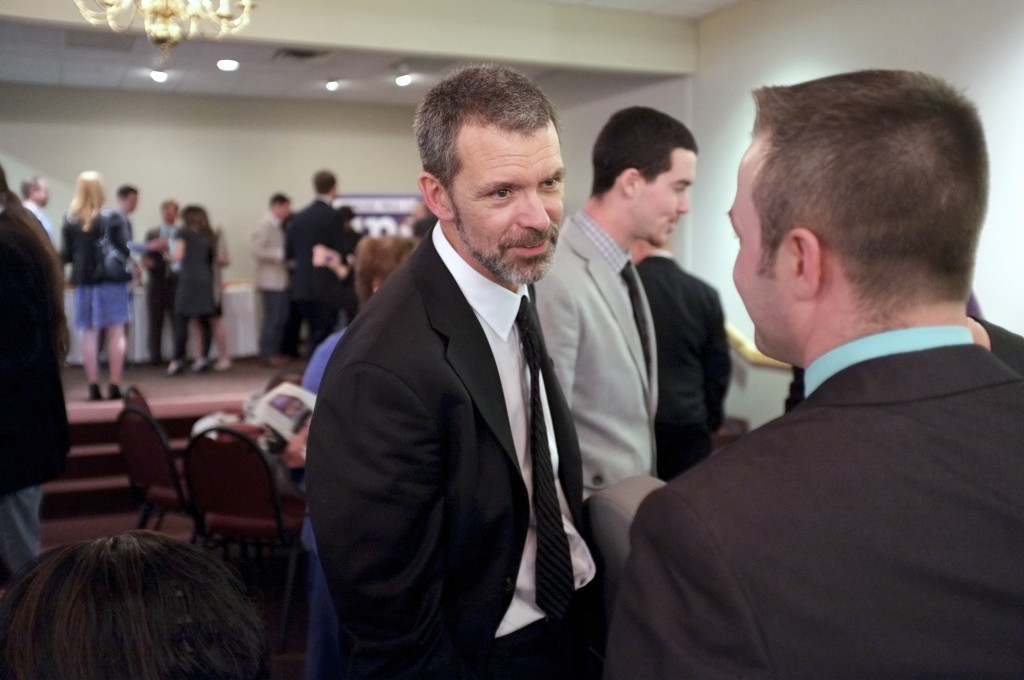 Last spring, while Romans gathered in St. Peter’s Square to await news of the election of a new pope, a vigil of a different sort was taking place in our town. Inside the white edifice at Clinton Square, reporters in the shrinking newsroom at The Post-Standard were keeping watch for a decision to be made by one of the newspaper’s most respected reporters and columnists. Waiting for Sean Kirst to decide whether he would continue to lend his talents to the reconfigured news operation didn’t result in white smoke emerging from a chimney, but when Kirst told his readers that he was going to stay, many of us felt that our prayers had been answered.

The Syracuse Press Club on Saturday night added Sean Kirst to its Wall of Distinction. Kirst has served upstate New York as a mirror through some of our toughest times. A Buffalo boy at heart, he has made chronicling Syracuse his vocation for decades, faithfully reflecting back the harsh realities of our industrial decline with a voice that never fails to hope for revival. He doesn’t just tell stories; he reveals people. His writing is infused with a Springsteenesque insistence on looking deep into the soul of his people and finding not only what makes us tick, but what makes us want to be better tomorrow than we are today.

Humble to a fault, Kirst will tell you that his work is only as good as the community it chronicles. He would give the credit to his hero, his wife and Syracuse city school teacher, Nora.

The honor he would most enjoy? A cleaner city. To thank Sean Kirst for his labors, bend over and pick up a piece of trash.

BIGOTRY OR RACISM?
WEARING HIS HEART ON HIS SLEEVE…AND THE OTHER SLEEVE…AND ON THE BACK…AND ACROSS HIS CHEST
To Top