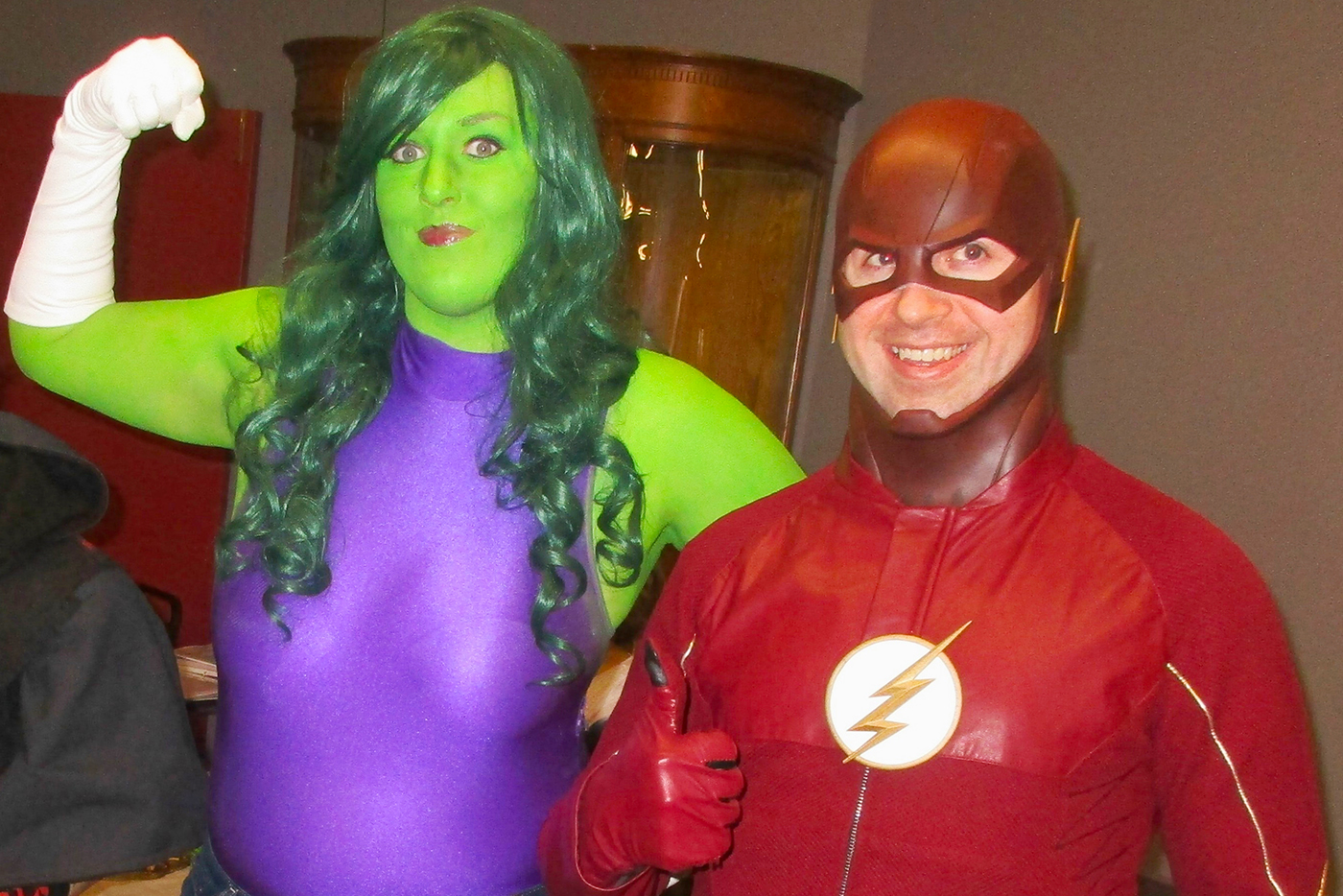 “Come as you are” really isn’t an option as Melissa Neufer and Alexander William prepare for this weekend’s fourth annual Salt City Comic-Con.

The Syracuse-based couple are avid cosplayers, owning — not just renting — a variety of colorful costumes including Neufer’s Wonder Woman, Catwoman, and She-Hulk and William’s Batman, Captain America and The Flash. Cosplay gives them the chance to make a memorable first impression.

“It is a great way to express myself,” Neufer said. “There is no judgment. People don’t look at me and think, ‘She’s really tall.’ They look at me and say, ‘Hey, she’s green, and that’s cool!’”

William said he has been into cosplay for 20 years, beginning with a college birthday party back in 1997 when he appeared in a store-bought Batman outfit. He has since learned a lot about appearing as comic book characters, as well as maintaining the magic of the illusion, especially if youngsters are around.

The temperature is often his biggest adversary, William admitted: “Most of my costuming has a mask, so if I can survive the heat everything else is fine.”

Neufer started her own cosplay as Dr. Who for an Elmira convention in 2014, finally dressing up after many years of enthusiasm for the world of pop culture. She found many kindred fans at that event and it set in motion a new calling that would lead her to the world of cosplay creativity.

“I was always into superheroes,” she recalled, “but never really had a group to ’geek out’ with.”

At the convention she met William, who was dressed as Captain America. They began dating after several months of internet courting, and appeared together as Wonder Woman and Captain America for a hero-themed library event in Elmira in 2015. They have since portrayed various colorful characters at a variety of both for-hire and charitable events, as well as simply showing up in costume for events like the Salt City Comic-Con.

Whether others come dressed to thrill depending on the attendee, William offered words of wisdom for those choosing to squeeze into their own spandex and leather: “Make sure you try it on and wear it for a while beforehand so you can get a feel for how long you can last in it.”

And watch out for the weather, Neufer advised. “I have definitely made decisions on what I am going to wear based on the forecast,” she said. “I can’t be green if it’s going to rain on me and wash it off.”

The costumes they will don for the Salt City Comic-Con are a secret. Neufer intimated that she will debut a brand-new character, but cryptically left the details unsaid. She is on Facebook as “Amazon Phenomenon,” and William is there as “Shadow of the Bat.”

There is a clan gathering of the Mandalorian Mercs, and a “Cars of the Silver Screen” display that will offer a rare, up-close look at famed vehicles like the Ghostbusters‘ Ecto-1, Back to the Future‘s Delorean, and the 1966 television version of the Batmobile.

The pop culture community has been rocked by the recent death of actor Adam West, best known as the star of TV’s Batman during the mid-1960s. William recalled his first main inspiration for comicdom was in watching reruns of the show, while wearing an old blue shirt wrapped around his shoulders as a cape. Both he and Neufer are now finishing up costumes based on the Batman TV series.

Nolan, famed for his own artistry work on DC Comics’ Batman books, also credited West for being a partial inspiration for his becoming a comic book professional. It will also be his first time at the Salt City Comic-Con, and “I’m a people person so I always look forward to interacting with the fans and talking comics.”

Fans should not feel apprehensive about stopping by Nolan’s table for a handshake, an autograph and a chat. “Don’t be nervous. I’m a regular guy just like them. I dug ditches, worked construction, and cooked in restaurants just like everybody else before I got this gig.”

A two-day pass to the Salt City Comic-Con is $20. Saturday-only admission is $15, while the Sunday-only price is $10. Kids ages 6 to 12 are half-price, with ages 5 and younger admitted free. VIP tickets are also available, along with special VIP-exclusive events. For more information, call (315) 935-9956 or visit saltcitycomiccon.com.