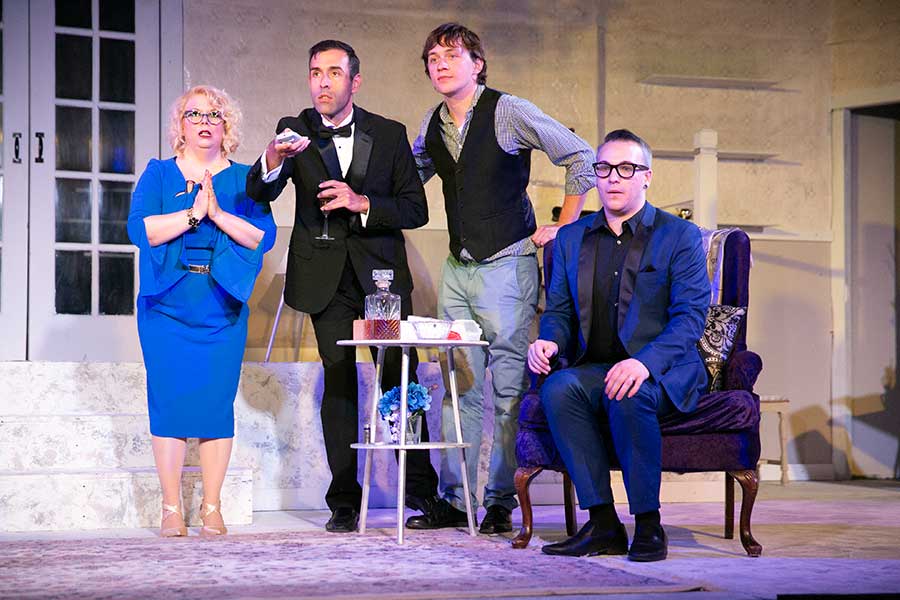 There’s plenty of comedy to chew on with It’s Only a Play from playwright Terrence McNally, who arguably ranks among our top 10 living dramatists — although he has not previously been known as a gagsmith. His best-known works, like Master Class and Frankie & Johnny in the Claire de Lune, are graced with sparkling wit but not in nearly every speech.

McNally labored on It’s Only a Play through four rewrites over 36 years before it became a smash with Nathan Lane and Matthew Broderick in 2014. It takes practice to hit the bull’s eye, as it does here in this Central New York Playhouse production, running through Saturday, Aug. 18.

McNally’s premise may sound familiar but his execution is not. It’s opening night for a Broadway comedy, ominously titled The Golden Egg. In the luxurious apartment of naïve first-time producer Julia Budder (Heather Jensen, in top form), people linked to the show plus hangers-on are anxiously awaiting the first reviews. We begin with James Wicker (Donnie Williams), a comic actor and “best friend” of the playwright who passed on the chance to play the lead. He’s now safely berthed in a secure TV show and can say what he wants.

This was the Nathan Lane role in the smash revival, and in the opening dialogue with Gus (Isaac Betters), Williams’ Wicker lets ’em fly. Not only is the humor bitchy but it’s aimed at other characters in the play we’re seeing (for handy, rapid exposition) as well as show-biz glitterati. Time has aided McNally’s efforts. In today’s environment we all know more celebrity names, and they’re generally more laughable than they used to be. Williams, additionally, does a wicked Harvey Fierstein imitation.

Making the grandest of entrances with an ear-piercing shriek is Virginia Noyes (Anne Fitzgerald), an over-the-hill star recently in Hollywood and hoping to remake her name on Broadway. Clasped with a red ankle monitor, she’s already lit from booze before she decides to take a line of coke, which brings the desired high spirits.

Nearly equaling her entrance is the golden-suited British director Frank Finger (Daryl Acevedo in a consistent Mayfair accent). His egotism appears to be supported by his reputation for having only hit after hit in London. Flopdom is not in his vocabulary.

Bringing up the rear is whiny, insecure theater critic Ira Drew (Roy van Norstand), who writes for some other rag than the New York Times and thus knows his opinion can be shrugged off.

While some of these characterizations may echo personalities once present in Syracuse community theater, it feels safe to assume that all are recognizable types, and not based on certain persons. All except late-arriving playwright Peter Austen (Abel Searor), the Matthew Broderick character in the Broadway revival. His parents live in Corpus Christi, Texas, playwright McNally’s hometown. Fittingly, he delivers plenty of zingers but philosophizes on the long view.

It’s Only a Play is a step forward for longtime actor and choreographer Stephfond Brunson, who drives a furious pace for two hours. Some of his most successful casting defies convention, such as costumer Donnie Williams, who shines in his first big role, and music director Abel Searor as the nuanced autobiographical character.