It does not really matter that Tennessee Williams’ The Glass Menagerie ranks high on the list of the greatest American plays of the last 100 years. More importantly, it is the most loved. Teachers cannot kill affection for it by making it assigned reading. That’s why this is the third Syracuse Stage production, after 1979 (directed by Arthur Storch) and 1999.

That love, along with a familiarity with every line (“ in love with long distance,” “blue roses”), puts a heavy burden on director and performers: How do you honor what makes audiences cherish about Menagerie while getting them to look at it anew? What director Timothy Bond has done with this production (running through April 27) is to get you to put aside the other versions on stage or screen to experience the crushing of a tender hope as if for the first time.

One step toward this goal is to return to Williams’ original script, which grounds the action in the expressionism he embraced in his youth and was still popular until World War II. There are no props, other than the glass figurines, so characters mime drinking coffee or carrying trays. In dialogue Williams describes what we are seeing as a “memory play,” the first coinage of that now familiar term, which he defines as “truth in the pleasant guise of illusion.” To underscore the artificiality of what unfolds, Bond includes Williams’ projected titles, which are sometimes key lines of dialogue (“How lucky dead people are”) or comments on the tone and action (“Crusts of humility”). Often, alas, these do not seem like such a good idea. When Amanda learns of the Gentleman Caller’s premature departure, the unnecessary words flashed up are, “The sky falls.”

Enhancing the expressionist conception of Menagerie is William Bloodgood’s surreal set. Above the action are about a dozen window frames because, after all, we are peeking into the private life of the Wingfield family. In an instant those windows can be switched to screens, sometimes with continuous images of items or themes cited in the dialogue. At times we see a smiling mug shot of the missing Wingfield father, the “telephone man.” Bloodgood gives us a stylized fire escape, removed and set above at stage right. Other productions have put Tom the narrator on a fire escape at the side, escaping the summer heat of the apartment. Bloodgood puts the actual fire escape in front and below, so that characters seem to exit to a pit. Amanda really has to scream after Tom when he disappears from sight.

The actors in the three Wingfield roles look as though they might not be in the same family, appropriately. Dark Joseph Midyett as Tom has been outfitted with a mustache, mischievously to evoke pictures of a youngish playwright Williams posted in the Syracuse Stage lobby. His accent sounds socially downscale from his mother, perhaps a result of time working in the shoe warehouse. This helpfully reduces the preciousness of Tom’s prose poetry and also adds an edge to Tom’s surly exchanges with the mother, while retaining deep empathy for vulnerable Laura.

That mother, Amanda Wingfield (Elizabeth Hess), is not a grande dame in the mold of Katharine Hepburn, even if that’s the way she sees herself. Like Polonius in Hamlet, she says silly things but still holds our affections. Hess is a tall, strawberry blonde, not unlike a younger Maggie Smith. Bond has Amanda place her hands above her head often, a self-dramatizing Episcopal Isadora Duncan. Her absurd, outdated cotillion dress (thanks to costume designer Jessica Ford) might make us wince. But Hess will not allow us to stomp on her needfulness. When the evening fails, and, yes, “the sky falls,” we can empathize with Amanda’s shock and disappointment, even if her vocalizing keeps the event short of her tragedy. 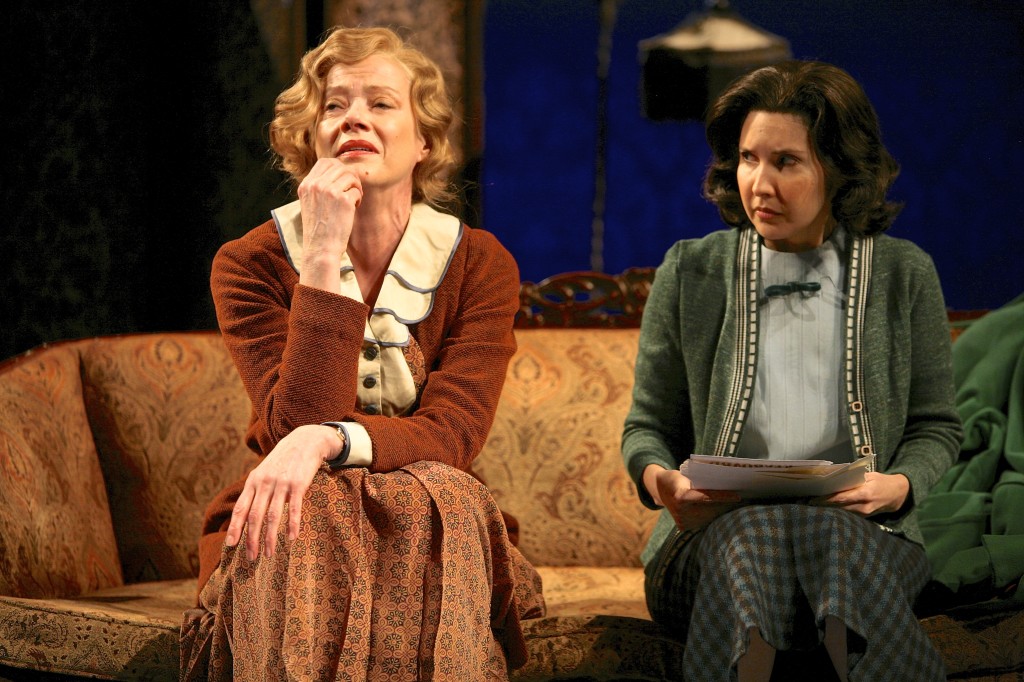 The lobby photograph of Adriana Gaviria, who plays Laura, reveals a leading lady beauty, but you’d never guess it on stage. Bond makes Laura so mousy that she’s almost invisible until the horrible night. When invited to the dinner table, she must cross the entire stage, emphasized by Dawn Chiang’s lighting, clanking what she wishes to hide: her bad leg.

When the clueless Gentleman Caller, Jim O’Connor (an excellent Michael Kirby), talks downstage to Laura about her collection, the production reaches its most beautiful and anguished moments. A gum-chewing go-getter, Jim means no harm, even when he diagnoses her inferiority complex. He cannot know that his kiss wreaks more damage than anything he says or does.

May the Faust Be With You
On the Double
To Top