Syracuse Shakespeare Festival, Ronnie Bell’s company that puts on free plays at Thornden Park during the summer, moves indoors during the cold. Winter is also a time to move away from Bardolotry to consider some other theater from 300-plus years ago, while also giving different directors a chance to take charge. For the two one-act comedies at the Syracuse University Warehouse Theater, The Suitors and Commedia (running through Sunday, April 13), two women are calling the shots. Veteran actress and director Judith Harris guides the little-known The Suitors, while Lynn Barbato-King helms Commedia, in which new, anonymous material is arranged in Renaissance format.

Early French comedy usually means Moliere, but The Suitors is by Jean Racine (1639-1699), known for heavyweight poetic tragedies like Andromache (1667). His only comedy, titled in French Les Plaideurs, appeared the next year. The title contains a pun, as the verb plaider may mean to press a legal case in court, to bring a suit, or to ask for someone’s hand in marriage, become a suitor. Elsewhere the title is translated as The Litigants. As one might expect, in The Suitors follows lawsuits and love quests at the same time. It’s a satire with elements of farce but no slamming doors, with lots of wordplay. Reliable sources report that the original French text is rife with double entendres turning on the law rather than sex.

A tangled knot of plot squeezes into an hour of action, and summarizing it for clarity is a disservice. A sitting judge, Nigaud (Sam Tamburo), has gone bonkers without any thought that he might be removed. His romantically inclined son Leandre (Jesse Navagh) has the jones for an inaccessible lovely named Isabelle (Juliana Beratta), unfortunately the daughter of the greatest generator of frivolous lawsuits in an otherwise quiet town in Normandy. Isabelle’s father is a scowling but apparently ambitious bourgeois named Chicanneau (Bob Reid). To promote his cases, Chicanneau often finds himself jostling up against another lover of litigation from a higher station, the Countess (Cathy Greer-English). As costumer Barbara Toman has dressed the cast in 1920s outfits, the Countess stops traffic with a white-fringed flapper outfit and cloche hat.

With the help of the useful LeClerc (Robert Miller), seen in straw fedora, Leandre is able to pitch woo to Isabelle and also get her terrible-tempered, but careless, father, to sign one document (uh-oh). Rushing back to court, we see the deranged judge trying a dog for eating some chickens. Wearing judicial robes while arguing for the defense of the dog is the porter-factotum Petit Jean (Peter Dowling), who previously provided much exposition. Observing the trial is a Prompter (Frankter Natera), wearing clown shoes. The uncredited dog, reputedly belonging to the English family, never misses a cue.

In its frenzied hour The Suitors brings many technical demands. Knocking sounds for unseen doors are perfectly timed, but lighting shifts in scene changes are not always there. A strobe light with manic Benny Hill-like traveling music during chase scenes appears a bit too often. Scenic designer Navroz Dabu’s illuminated panels evoke a Gallic street scene. 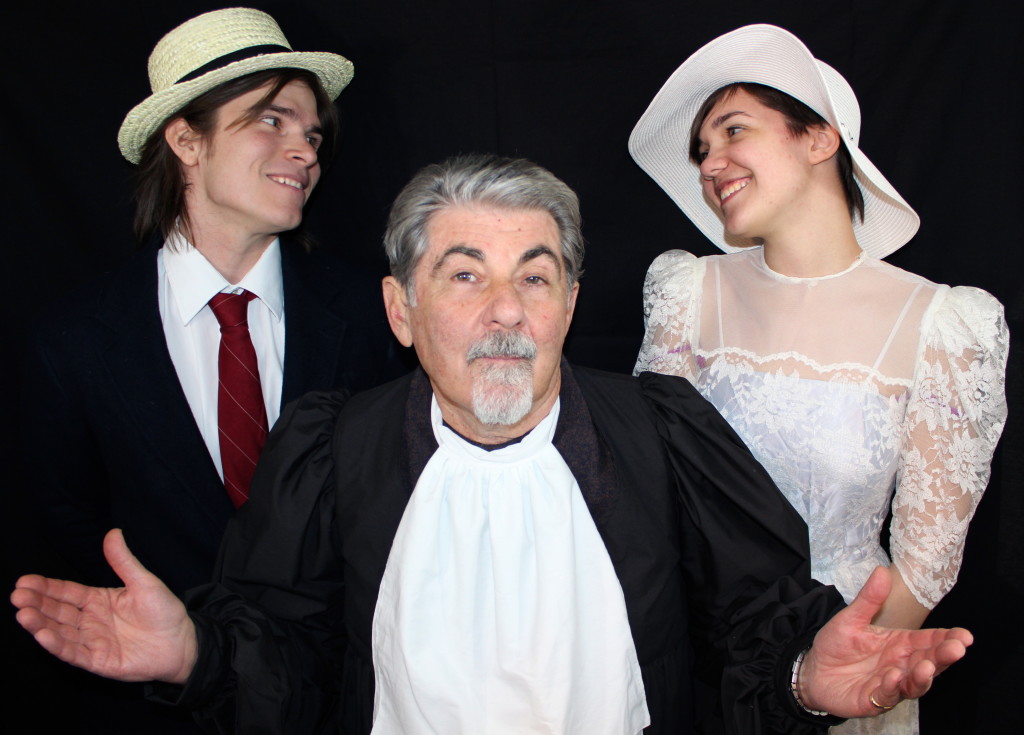 In her program notes for Commedia, director Lynn Barbato-King writes that “anything goes. The actors are in the driver’s seat.” So when no writers are credited we assume the actors provided their own lines. Dottore (Christopher Best) quotes Shakespeare, and Arlecchino (Rahshon Glover) quotes Marlon Brando’s Godfather many, many times. Director Barbato-King may not yet be a widely familiar name, but she appeared as Bianca in Othello (February 2012) and Jessica in The Merchant of Venice (February 2013). Her six-player ensemble includes some company regulars and some new faces.

Her title implies homage to commedia dell’arte, the original improvisation theater that began in Italy during the Renaissance and then flourished all over Europe for about two centuries, including the times of Shakespeare and Jean Racine. Actors assume a defined persona, such as the self-important Dottore and the witty, multicolored Arlecchino (Harlequin in his French incarnation). Originally, commedia dell’arte could include some fairly violent slapstick (a stick made of many shingles for more noise), and gags really made up on the spot.

Players indeed seem to be flying off in different directions. Patrizia (Sara Caliva) breaks into a noisy rap routine from time to time, the only cast member to go there. But elsewhere Commedia feels more like vaudeville, often with the verbal rhythms of Groucho Marx, such as Dottore’s advice to his son, Patrizio (Kevin Fitzpatrick) to get on with life: “Spend more time looking at boobs instead of being one.”