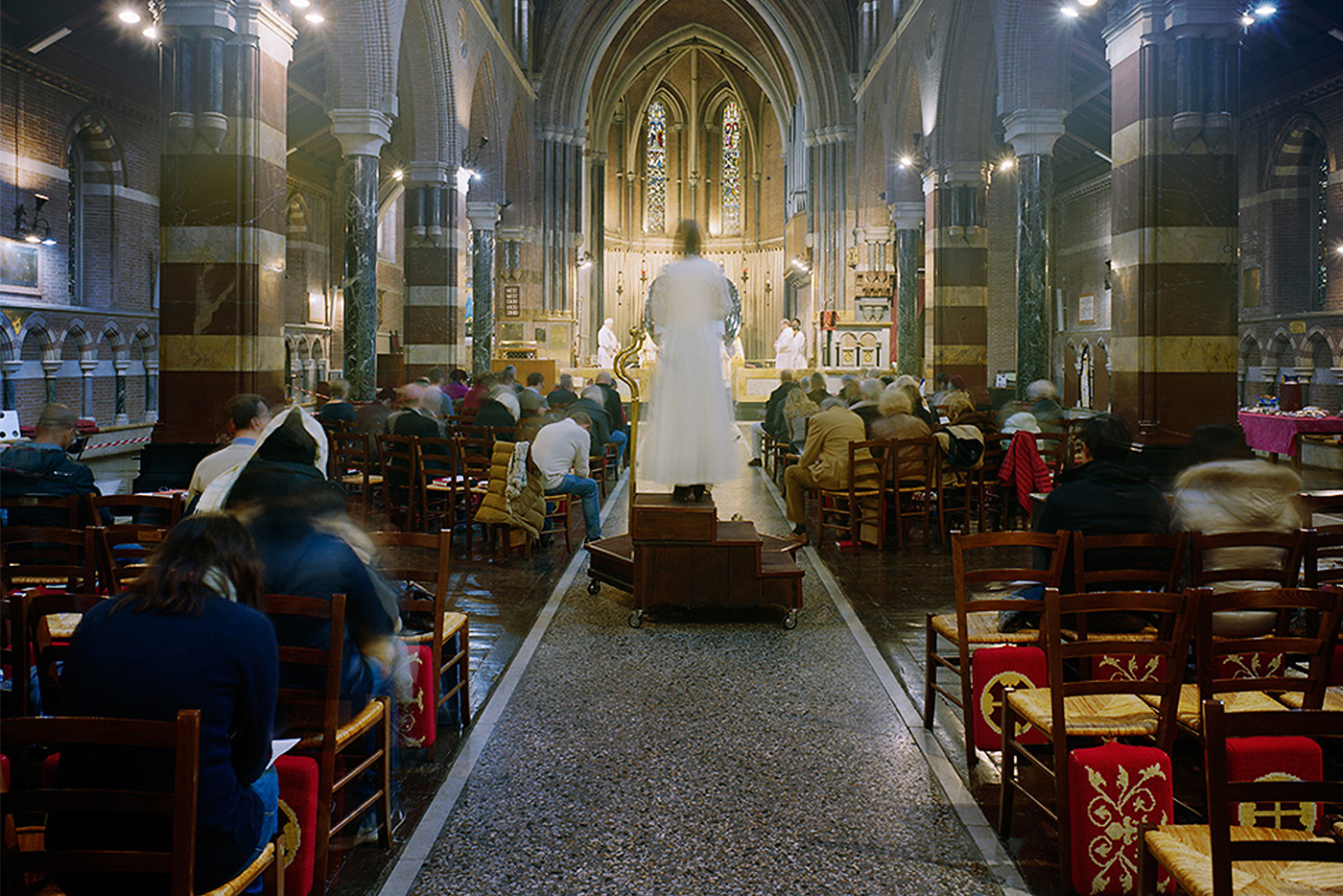 Now at the ArtRage Gallery, In God’s House: The Photographs of Robert Knight displays images of churches and mosques in Italy, England, Morocco, France and other nations. The show not only depicts sacred spaces but deals with a larger agenda.

Knight is interested in the state of religion in current-day Europe, the relationship between a congregation and a house of worship, and the history of religious sites. To explore those topics, the photographer uses both straight-up images and photos with long exposures, creating shadows or ghost-like figures. 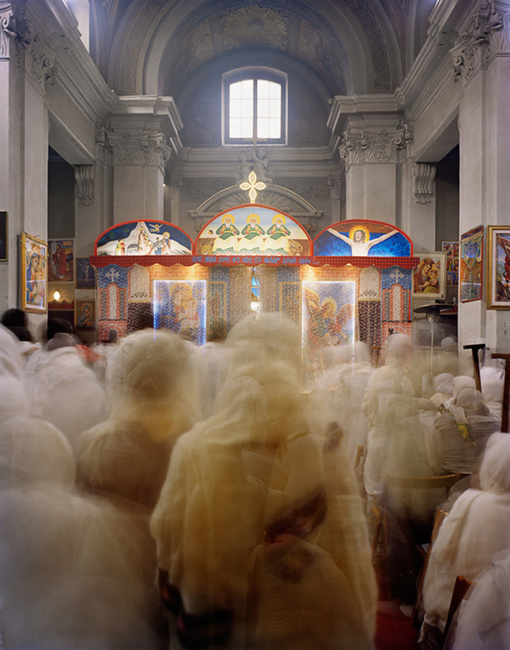 In an image of an Orthodox Christian church in Rome, Italy, the congregants, all in white robes, appear blurred. They are immigrants from Eritrea, East Africa. Similarly, a photo of people kneeling for prayer in Rome’s Grand Mosque presents most of them in shadows. And the heads of several worshipers in All Saint’s Anglican Church, also in Rome, are blurred in Knight’s photo.

The technique emphasizes a notion of commonality: In spite of theological differences, each space is a house of worship. It also touches on the temporary nature of one service; people are worshiping in a location that’s 75 or 200 or even 1,600 years old. Beyond that, the “ghosts” suggest that religion is transcendent.

Other details emerge from Knight’s images. The Rome church serving an Eritrean community is packed for Sunday Mass, while a service at San Nicola, a Roman Catholic Church in Carcera, Italy, is sparsely attended. At other churches or mosques, attendance is either robust or modest. Here Knight isn’t making sweeping conclusions. However, it’s true that churchgoing has declined drastically in several European nations.

In addition, the artist is delving into transitions, into spaces once occupied by one religious group and then another. In London, England, Roman Catholics founded the Church of St. Bartholomew the Great in 1123. Four centuries later, after King Henry VIII broke with the Vatican and established the Church of England, this became and remains a Protestant church.

Moreover, in Amsterdam, the Netherlands, a church named for St. Ignatius, opened in 1921. It was transformed into the Faith Mosque 50 years later.

Knight’s discussion of such themes comes in the context of his images. He delivers striking visual details: the red- and blue-striped rug in the Faith Mosque; a mosaic pattern in the chapel for Church of the Holy Martyrs, Marrakech, Morocco; a panoramic view of the Sutanahmet Mosque, in Istanbul, Turkey; a magnificent altar in Basilica San Clemente, a Roman Catholic space in Rome.

And Knight brings a sophisticated approach to the exhibition. He acknowledges differences and similarities for the sacred spaces while not equating the Roman Catholic, Islamic and Protestant faiths.

He also focuses on religious toleration in a nuanced way. In our time, it’s easy to find examples of extreme intolerance: dozens of anti-Semitic incidents in France, fire bombing and other attacks on mosques in Sweden and Germany. Those acts are heinous, but they aren’t the entire story. The show celebrates religious diversity and the concept of tolerance.

In God’s House has a lot on its plate, yet even in a relatively small exhibition of 16 images, Knight has no problem conveying complex ideas. Most of all, he’s created photos that engage viewers and let the larger exhibition flow.

The display runs through Jan. 21 at ArtRage, 505 Hawley Ave. The gallery is open Wednesdays through Fridays, 2 to 7 p.m., and Saturdays, noon to 4 p.m. ArtRage has also scheduled two programs in conjunction with the show. On Jan. 10, 7 p.m., “Transforming Holy Spaces,” a panel discussion, will focus on 501 Park St., the longtime site for Holy Trinity Church and now the home of Jesus, Son of Mary Mosque. And on Jan. 19, 7 p.m., Knight will give an artist’s talk. For more information, call 218-5711.