Channeling the power of technology with our children

Chances are, if you are reading this, you remember the days when “playtime” meant going outside, no matter what the weather; meeting up with friends, neighborhood kids, and brothers and sisters; and chasing each other through the woods, around the playground, or back and forth through each other’s yards with water guns, dodge balls, homemade swords, capes, flashlights, duct-taped helmets, and water balloons. Those were the days.

Sadly, “kids these days” don’t have those experiences as often. Though many young people still play organized sports, according to Smart Planet, the average kid spends over seven hours a day on some sort of “electronic.” Video games even, thanks to the World Wide Web, connect kids from distant places: instead of your son’s best friend Johnny coming over to play “Contract Killers 4,” eat popcorn, and share dinner conversation with the family, he’s connected via headset.

On the upside, technology is second nature to today’s youth, often for the better. They will have no trouble taking advantage of the innovations the tech world has to offer; they will teach their elders to use these life enhancements; they will cure cancer, AIDs, they will lessen poverty, they can create immediate awareness of social issues; they can train their minds and expand their imaginations – all with a touchscreen.

However, as parents, teachers, and mentors, the task of channeling the power of technology with our children is weighty and at times, daunting. There are pro’s and con’s, advantages and dis,’ opportunities, as well as the proverbial Pandora’s Box. Here are a few thoughts on the matter.

While some parents give their children access to iPads, smartphones, or buy them the “LeapPad” or similar tech to “babysit,” entertain, teach, and distract them; other guardians feel waiting until they are “double digits” is a better play: giving them something to look forward to, encouraging them to encourage their friends to play outside, read a book, draw, or play with Legos or other three-dimensional toys.

There are benefits on both sides: opening kids to the wonders and positive opportunities of tech at an early age, while on the other hand, keeping something to look forward to and encouraging other healthy activities. Mail Online says children today get outside half as much as their parents did as kids; a statistic that speak volumes in and of itself.

There is a balance to the above query: limiting time and exposure to tech. While “TV time” has been a parental legacy since the box has been a household item, not allowing iPad use an hour before bedtime, in the morning, for only 45 minutes after school – are all options parents can choose to get the best of both worlds.

Kindle Fire, for instance, has a parental control for limiting the amount of time a child user has to watch movies, play games, or read books each day. (#smart) I’m sure there’s an iPad app for that. #defensive

According to Mashable.com, 81% of toddlers have an online presence before they are two. Two! This is pretty obvious given most American parents have a Facebook, Instagram, Pinterest or something of the like. When a couple becomes pregnant, all of a sudden, their social profiles are “all about the baby” – often to the chagrin of their drinking buddies. Until it happens to you, you will roll your eyes (and ooh and ah, at times, of course).

While neither Facebook nor Twitter allows users under 13, lying has been around since Adam and Eve, but also parental supervision since Cain and Abel (okay, bad example).

It’s up to guardians to keep a keen eye out on their children’s online activity. Having the “cyber stalker” talk with your kids is arguably as important and probably given earlier now than the infamous “birds and the bees” lecture. Making sure parents have their kids’ passwords is a common practice. Knowing that alternate accounts can be set up at a friend’s house under an alias is also a reality.

To paraphrase a politician of years past, “More than gun control, we need self-control.” The same can be applied to parenting in the digital age.

When is the acceptable age for a kid to get a phone? Obviously this will vary depending on the child, formation, and parent. Rules for use are set in schools these days. The disadvantages of added distraction are also coupled with the convenience of constant and immediate communication (say that five times fast). And parents or “framily” guardians can easily monitor the activity of that phone line to make sure things are on track.

Modern apps such as “Find my Friends” and more complex parental downloads such as the Family Tracker and Footprints apps can add a layer of “peace of mind.” Mom and Dad can now have their children’s phones’ location always accessible at the tap of an app, given that the child doesn’t Bourne Ultimatum them by leaving it in a strategically innocent location and then play hooky.

The average human attention span in the year 2000 was 12 seconds. Today it’s 8. That’s one second less than a goldfish.

There is a direct correlation from this decay of the human mind to the growth of electronic mass media. “The average person checks their smartphone every six minutes,” said Dr. William Ward, an esteemed professor of Social Media at Syracuse University, “That’s 150 times a day[!]”

However, there are upsides. There are hundreds of educational apps – paid and free – to enhance and speed the learning experience. These “keep their minds active” positively and are “interactive” more so than just a book or workbook. Apps such as these can be buffers for parents to require each day “before games are played,” etc. – especially after the 180 days of school are over and “summertime learning loss” takes effect.

Nothing beats ‘roughing it’ without the machines though. While having some way of emergency contact is always good; back in the day (and we’re talking 10-20 years ago), phones had cords attached to them and you had to hide in the bathroom if you didn’t want someone to hear you talking. There was always a chance Mom was on the other line though.

Going out into the woods or backpacking it up a mountain used to mean just that: writing in the log when you’d be back and see-ya-later! Today we can bring our phones everywhere but there’s a reason Silicon Valley exec’s often retreat into the wilderness “unplugged” – it’s therapeutic and gives one the mental fresh air you need to live a balanced life.

Don’t take that away from kids either.

Years ago, working as a waiter, I remember some parents used to bring iPads in for their kids while they waited for their meals. Family conversation was non-existent at those tables.

One night, a table of all young ladies, ages adolescent to young adult, came in; all with smartphones in hand (#shocker). I distinctly remember asking them what they wanted for dessert, but they were all glued like flies to the glow of their phone screens. After an awkward twenty seconds, one of them stood up and told me how many pieces of chocolate cake and how many ice cream sundaes they wanted. Apparently there was a group text about dessert. 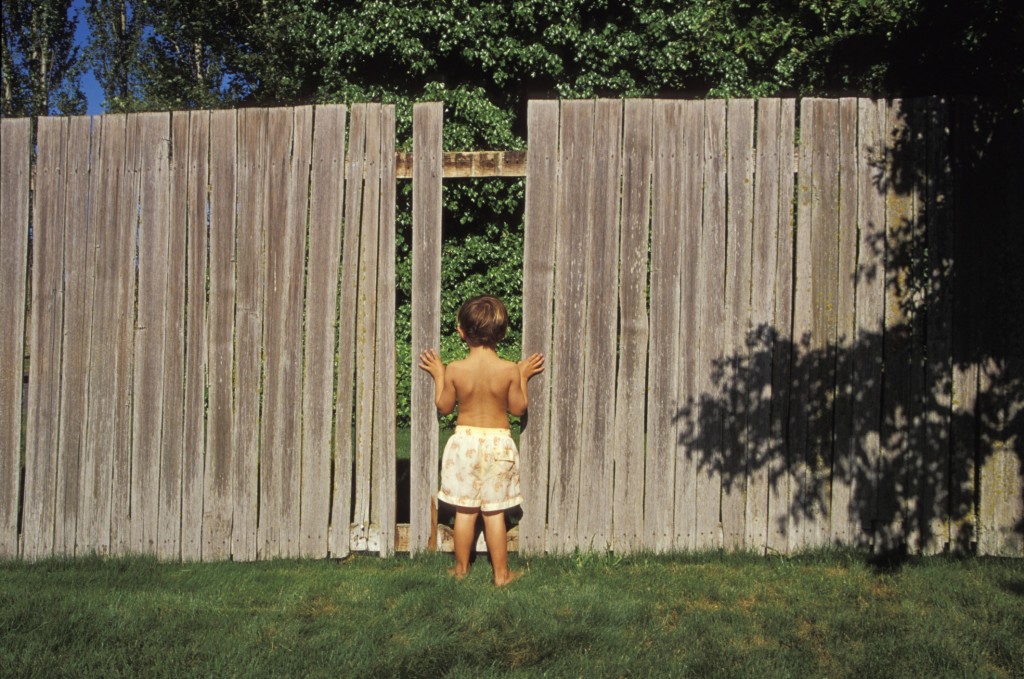 Peeking through the fence. Thinkstock Photo.

Is this what the world is coming to?

In short, parents had to be parents back in the stone age when getting eaten by a sabre toothed tiger was a daily worry; so too will they have to parent when kids can take the school shuttle from Venus to Uranus (like my choice of planets?); so too do they have to put their foot down in digital times.

Technology is and always will be just a means: neither good nor evil but only as one uses or abuses it. Just as they teach you how to drive, tie your shoes, pee inside the toilet, and look both ways before you jump off a bridge; so too must parents set the example and instruct their kids on healthy electronic use.

Glad I got that out there. Now to binge-watch my new show on Netflix while late-night texting my friends, scrolling through Facebook, and answering hate e-mail.

What’s Up in Tech
Tech Round Up
To Top