A new standard is established for consumption of cauliflower wings.

Everyone knows I’m a helper, so when a crunchy new restaurant dared to be different by serving–gasp!–cauliflower wings at the downtown Wing Walk, my impulse was to assail critics as close-minded, change-averse, planet-endangering Neanderthals, no offense to Neanderthals intended. 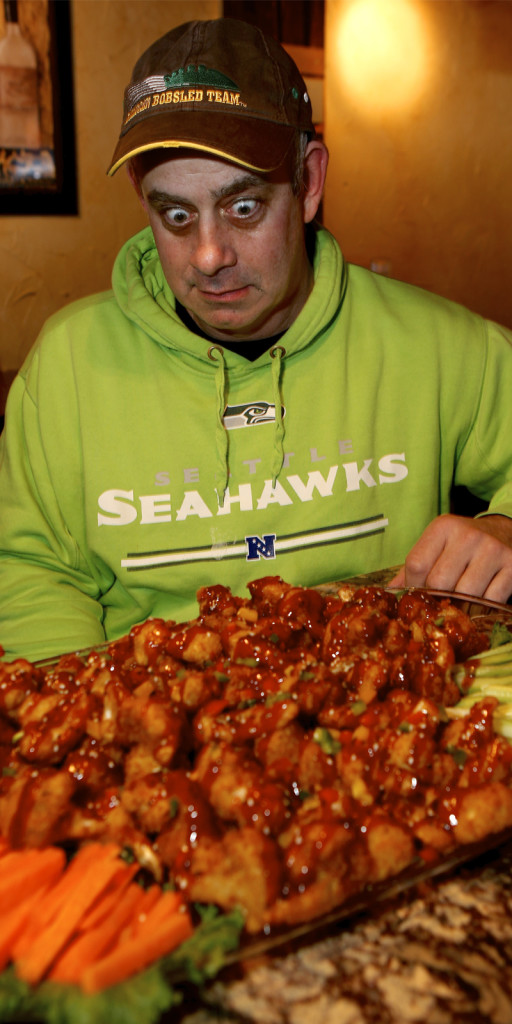 Who were these self-appointed purists declaring all wings must be made of chicken? So incensed was I that I made an incredible offer to Abigail Hensen, owner and chef of LoFo, on Walton Street. To show my support for her and her local foods-themed restaurant, I would devour as many of her controversial cauliflower wings as humanly possible, and thus establish a numeric benchmark for her clever variation on our upstate staple. It would be The Kramer Line, if you will.

It seemed like a perfect win-win. Great publicity for LoFo. Deeply discounted binge-eating and an easy column for me. Only one problem: In the sweetest and nicest way possible, Hensen implied that I, of all people, was the Neanderthal for promoting overeating.

“It’s just so bad for your body to eat that much,” she clucked.

Our negotiation was long, exhausting and ultimately futile. I pointed out that I would be eating large amounts of healthy cauliflower, not greasy demon chicken. I pledged to emphasize in the column Hensen’s concerns about “portion distortion” and to make clear that LoFo would never think of offering cauliflower wing-eating contests to the general public. I even promised to stop my gorging well short of vomiting, which, in retrospect, maybe wasn’t one of my more persuasive talking points.

But no matter how hard I tried to sell it, Abigail wouldn’t budge. “It’s against everything we stand for,” she insisted with all the deadly serious idealism of a future Chapter 13 filer.

Defeated, I scuttled out of LoFo feeling a little LowLow. But it wasn’t long before kernels of rebellion swirled in my breast. Had not LoFo agreed to be a participant in the Wing Walk and thus promote itself by glomming onto the Upstate Wing Culture, which–like it or not–includes wing-eating contests? Was it not hypocritical to slather oneself in wing-related publicity and then sanctimoniously discard the competitive, bone-stockpiling soul of Wingdom? And while we’re at it, who the Fo was LoFo to regulate the number of wings I consume? Isn’t that Michelle Obama’s job?

Fortunately, in times like these there’s a place I go where everybody knows my name–in part because I keep leaving my credit card at the bar. I’ve eaten more wings of the chicken variety at Kelley’s, on Onondaga Hill, than anywhere else. Something told me that the Kelley’s management team might not be ethically tortured by the idea of serving me cauliflower wings to the point of exploding.

“Let’s do this,” said Damon Kelley, precocious son of founder John, within six seconds of hearing my pitch.

We hatched a plan. The Kramer Kauliflower Wing Challenge would happen at 3 p.m. the next day, on Friday, Feb. 28. In the interim, I would prepare my body and spirit for the quest by eating light and stretching out my stomach by drinking lots of beer.

The tougher job fell to Kelley’s, which had never made cauliflower wings before. Chef Karl Dawkins experimented with four variations, some roasted like the ones at LoFo, some deep fried, before settling on a panko-battered, deep-fried wing drenched in an “Asian Zing” soy-ginger sauce.

I buffalo you not. They were incredible. With my wife, Leigh, and proud daughters, Miranda and Lily, in attendance for moral support, Karl presented me a platter of 100 cauliflower wings. They were a gorgeous golden brown, visually almost indistinguishable from regular chicken wings.

I mowed through the first two dozen with the happy exuberance of a shipwrecked explorer who discovers he has washed up on an island of nymphs. Each crispy floret possessed a perfect, delicate-yet-toothsome consistency. Precisely on account of its blandness, the cauliflower functioned as an ideal conveyor of Zing sauce. In this way I found them superior to, say, deep-fried mushrooms with their squishy constitutions and unnerving squirts of molten juice. The fritter-like texture of the cauliflower proved irresistible.

At about the three-dozen mark, I experienced a sensation that told me this would be a good place to stop if I weren’t on the hook to set a record. Five wings later, rivers of Zing sweat began to pour from my brow and scalp. I kept going. I have always told my daughters that winners never quit and quitters never win. What would they think of me if I caved before the half-century mark and caulibarfed in the urinal? They would think: OMG #mydadsaloser.

So, there you go. The Kramer Line for Cauliflower Wings is 63. Surely it won’t be long before some young buck or buckette comes along and destroys my record, assuming Kelley’s adds these succulent masterpieces to their already excellent menu. But the important thing is that the Competitive Eating Community now has a goal, and at least for now I am King of the Cauliflower Wing Universe. The rest of you can go LoFo yourselves. 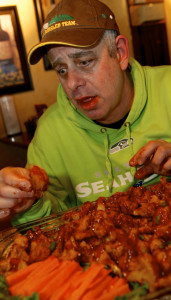 As for Kelley’s, I’m indebted to the establishment for turning out a spectacular cauliflower wing product on such short notice. By fostering an environment that encouraged me to make a gluttonous spectacle of myself, Kelley’s acted with utter disregard for portion control, environmental sustainability and basic human dignity.

No wonder I keep coming back

The Doctor is In
Winds of Change
To Top