(SANITY FAIR) In Syracuse, gay fans have to endure taunts of religious bigots exercising their First Amendment rights to get to the Carrier Dome. 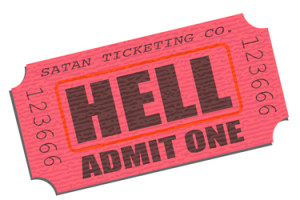 It seems that each time we trudge up the hill to a Syracuse University basketball game at the Carrier Dome, there is more than one nasty wind blowing. I don’t mean the usual winter wind that slices at your face and turns the crowd into a huddled mass moving like hunting dogs with our faces pointed at the ground. That’s a familiar force of nature; we just pull our hoods tighter and keep on climbing.

It’s that other wind from the guys with the large black signs and the megaphones, shouting about somebody they think they know named God and how this God of theirs wrote to tell them that the rest of us are going to hell, which is presumably a place even less hospitable than the corner of Walnut and University with a wind chill of 20 below.

Last time I looked, that’s pretty much all of us. Their list of the condemned includes a pretty good chunk of all the adults sitting in the Dome at any given time, yet we all have to endure these high-decibel insults to our sensibilities just to get in to a basketball game.

I wonder what convinces a man (no sexism here, just giving credit where credit is due) that shouting frightening consequences out loud to a passing crowd is an effective way to get your message across. I wonder how they think that this will convince anyone to join their group. I wonder how they see this fitting in with a religion founded by someone who was not known for condemnation and was rarely known to raise his voice.

I’ve tried talking to these guys a couple of times, and usually had no success. They are hellbent on shouting into their bullhorns and appear to have been trained, like the righteous men they firmly believe they are, to resist the slings and arrows of the fornicating class.

Except one guy, who was standing next to the largest sign they ever brought to the SU Hill. The sign was so large he couldn’t hold it. Instead, it was propped up on an easel, which was weighted down with sandbags. The sign posed a challenge I had never before seen posed in print: “Tell me one thing that is natural about the homosexual act,” written in large white letters on the black foam board.

I took this man at face value. Clearly he was seeking information that, in all his years on this earth, life had previously not made available to him. Being somewhat literal in my thinking, I began to compose a list of possible answers.

As I walked toward the guy he startled, stepped back and kept growling into his microphone about how we were all going to hell. I’m not a very threatening presence, so I just bided my time. He’d have to take a breath at some point. When he did, he glanced over at me, and I quickly asked him a question.

“You know there’s more than one, right?”

His eyes grew big. What he was expecting I don’t know, but it wasn’t this. Then, to my surprise, he set the megaphone aside and asked me a question.

“More than one what?”

“Um, homosexual act. You know there’s more than one, right? We can’t answer your question. It’s not specific enough.”

The next few seconds passed slowly as we looked right into each other’s eyes. I tried to read the thought process going on in there. Would I be invited to elaborate? Told to go to hell (which he kind of had already done)?

He turned away and went back to his prepared text. And I turned my head to the wind, pointed my face to the ground, and joined the sea of condemned Orange fans climbing toward the Dome in search of our own brand of redemption.

From Arizona to Uganda

It’s all relative. In Syracuse, gay fans have to endure taunts of religious bigots exercising their First Amendment rights to get to the Carrier Dome.

In Arizona, under a bill approved by the state Legislature, they could have been denied access to any place of business where the owner expressed a religious objection to homosexuality. The governor of Arizona, Jan Brewer, bowed to pressure and vetoed SB 1062, calling it unnecessary.

In Africa, things got even worse. President Yoweri Museveni signed a law that would go beyond threatening with hell anyone who has gay sex. He would send them to a Ugandan prison, in some cases for life. Museveni appeared to be competing with Nigeria’s President Goodluck Jonathan, who weeks earlier had signed a law that punishes gay sex with prison sentences of up to 14 years.