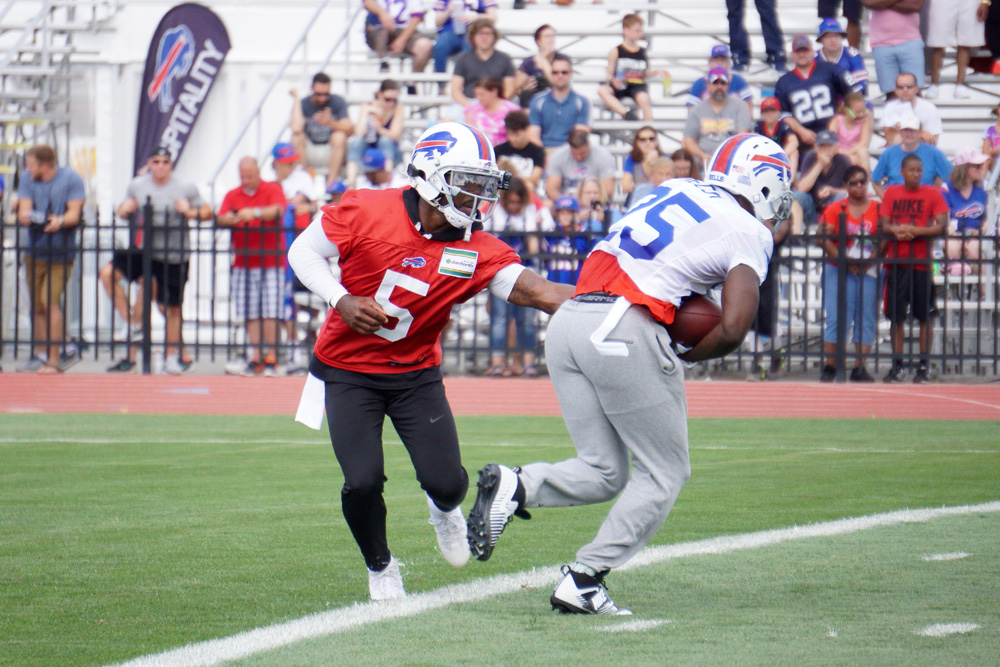 The Buffalo Bills prepare for the upcoming season at training camp in Rochester.

This time last year, the Buffalo Bills were surrounded by the excitement of fresh starts across the board. The team had a new head coach in Rex Ryan, a new Pro Bowl running back in LeSean McCoy, and a defense coming off a season where it was ranked fourth in the league for total yards given up per game. Fans were hopeful the team would finally get the playoff monkey off its back after missing the postseason every year since 1999. But ultimately, not much changed in the win-loss column, and the team went a subpar 8-8 while missing the playoffs yet again.

Now that another season is just over a month away, training camps are being held around the league, and the Bills aren’t seeing the type of enthusiasm from fans that was displayed last year at this time in Rochester at St. John Fisher College. There are, of course, cheers when players make an impressive catch or juke out another player, but fans seem overall disinterested. Minimal are passionate Bills fanatics cheering players on even when nothing is happening, only to be replaced by a stillness in the crowd. Ryan commented on this by saying the situation the team was in last year was a new one and the atmosphere was a product of that.

“You look at our circumstances and you had competition at the quarterback position. I think that was a lot of the focus,” Ryan said at a press conference on Sunday. “Nobody, including coaches, players (and) fans really knew who the quarterback was going to be. Now, I guess it is more business-like.”

Notable newcomers to the Bills via the NFL draft are defensive end Shaq Lawson, defensive lineman Adolphus Washington and quarterback Cardale Jones. Lawson, however, unfortunately suffered a setback before he could see the field. He aggravated an existing shoulder injury in May during a non-contact drill that is expected to sideline him until at least October.

Coming out of Ohio State, Washington figures to play in the company of veterans Dareus and Kyle Williams, a position Ryan said he should flourish in. “When your talents are alongside Marcel Dareus, Kyle Williams, Corbin Bryant — some real players — I would think that you’d be able to make some plays,” Ryan said. “Because the focus is not going to be on you, the focus is going to be on others. He’s going to probably in more one on one-type situations, and I think he’s got that kind of ability where he’s going to show up, he’s going to make plays … He’s athletic. Another guy that never ran a great 40, but on film, he can show pass-rush ability and change-of-directions skills.” 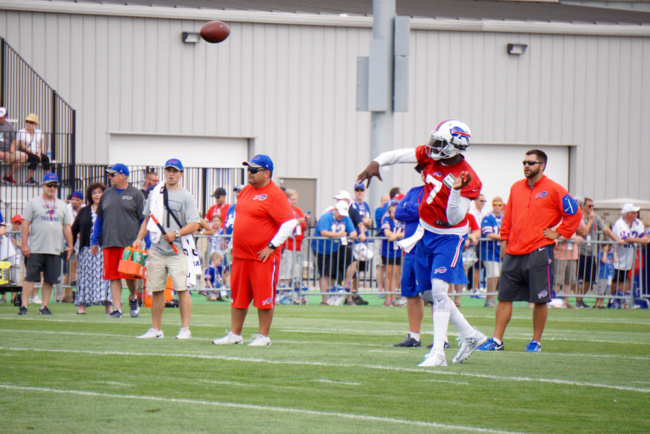 Meanwhile, another Ohio State product Cardale Jones would presumably play third string behind Taylor and Manuel — if he makes the team. The Bills took a gamble on the National Chamionship-winning quarterback by selecting him in the fourth round in April’s draft, and thus far, Jones has shown his youth by being shaky in the pocket and overthrowing his intended targets.

“I think, coming into this league, if you’re a rookie quarterback, it probably is big for anybody that comes in,” Ryan said. “I’ve seen him do a lot of good things, then there’s times where it’s like, you know, the traditional rookie quarterback (mindset): hold the ball, hold the ball. No, no, you’ve got to let it go. I think those are things you just have to adapt to the speed of the game and the National Football League and we’ll see how he does. He’s got a big-time arm and he’s got the NFL skill set.”

Other additions made include added height to the receiving core. Former Cleveland Brown Greg Little was brought in via free agency and immediately used his 6-foot-2 frame to his advantage against standout rookie from 2015 Ronald Darby by making a catch over him in the red zone during Sunday’s practice.

“That’s where that size is the biggest advantage is in the red zone where you are getting the one on ones,” Ryan said. “It’s tough sometimes, you’ve got to force the ball in to tight coverage and tighter windows, and that’s where those big, competitive receivers have an advantage.”

Though 2015 didn’t see a Bills playoff berth, running back Karlos Williams provided a spark on offense , however he’s had two notable setbacks during the offseason that have put his future with the Bills in question. He showed up to June minicamp 20 pounds overweight, according to multiple reports, and was suspended for the first four games of the 2016 season by the NFL for violating its substance abuse policy. Williams played in just 11 games due to injury last season, but gained 517 yards rushing, while twice surpassing the 100-yard mark in weeks 3 and 9.

To make matters worse for Williams, the Bills signed veteran running back Reggie Bush on Monday to a one-year deal. With the signing of Bush, the Bills now have not only two of the most elusive and agile backs in the game with him and McCoy, but two of the best receiving backs as well. Both players have totaled at least 200 receiving yards in each of their respective seasons, except one. McCoy gathered 155 yards receiving in 2014, while Bush had just 19 last season after playing in five games before he tore his meniscus.

Williams is not the only player temporarily sidelined to begin camp. Star receiver Sammy Watkins is out recovering from offseason foot surgery and defensive lineman Kyle Williams is rebounding from missing 10 games last season due to knee surgery. Both men began training camp on the physically unable to perform list. Opposite Kyle Williams, Marcel Dareus is also sidelined to begin camp, though he was placed on the non-football illness list. The good news is that all three should be ready to go for week 1.

The Buffalo Bills’ training camp concludes on Monday, Aug. 22, and the team begins its season on Sunday, Sept. 11, against the Baltimore Ravens in an away game.

View a gallery from Bills camp below: