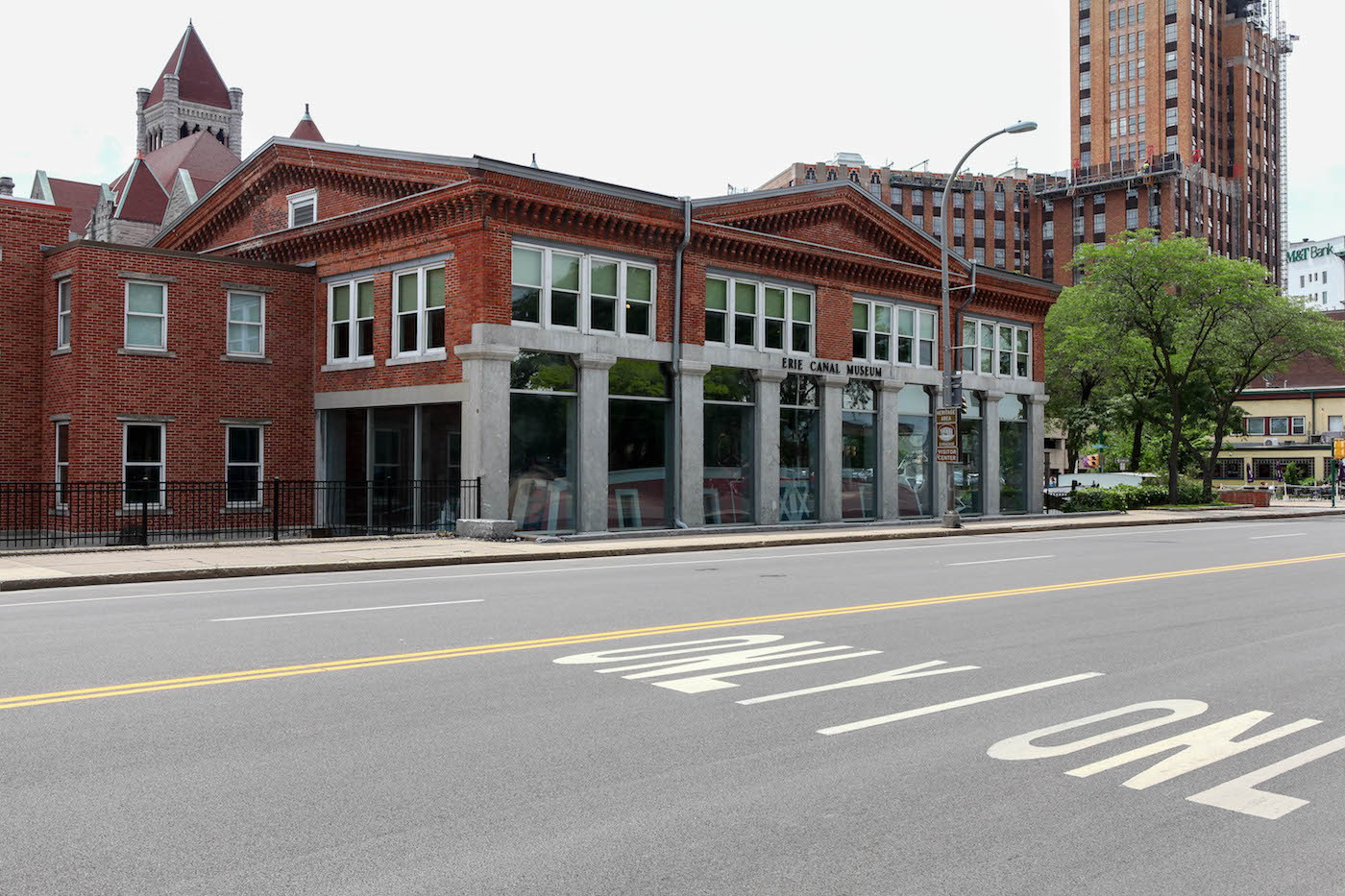 When the staff of the Erie Canal Museum developed plans for celebrating the canal’s bicentennial, they didn’t focus on ordering balloons or a 200-candle cake. Instead, they looked for ways to further explain and interpret a complex subject.

The Erie Canal isn’t just one of the largest public-works projects in the history of the United States: It has multiple implications, political and economic, technological and cultural. Beyond that, it’s still active today, used for commerce and recreation. 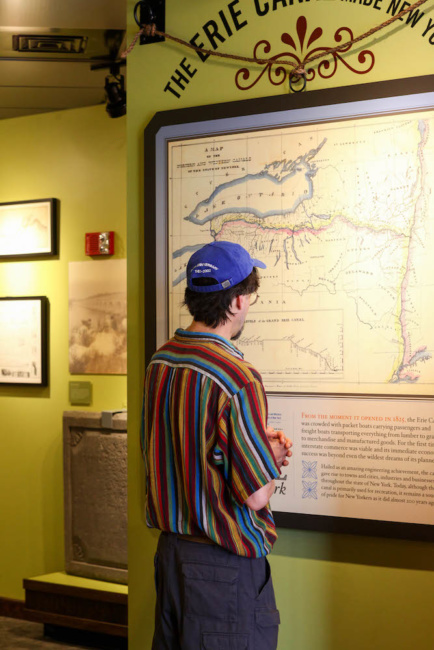 And so, the bicentennial programs are broad-based, including two exhibitions, workshops, lectures and a collaboration with Symphoria, which will present concerts at Port Byron’s Erie Canal Park on Friday, July 14, and at Clinton Square on July 28.

In addition, the museum, 318 Erie Blvd. E., will certainly benefit from scheduling of the 2017 World Canals Conference for Sept. 24-28 at the Syracuse Marriott Downtown. The museum didn’t organize that event, but its presence in Syracuse will make it possible for canal enthusiasts from Poland, South Korea, Scotland and other nations to visit the museum.

The museum’s special exhibits include Erie Canal Abstract, which showcases work by Robert Graham, an artist based in Rochester. He took photos of the guard gate in Seneca Falls, a lock wall at Clyde, and other locations. His involvement with the Erie Canal extends more than five decades; his father was a tugboat captain on the canal.

A group show, Life on the Canal Then By Artists Now, displays varied artworks. Indeed, it moves from Diana Kurz’s oil, “Mule Towing the Barge,” to Amy Sanchez’s “Joel on the Canal,” with psychological overtones, from Richard Haas’ gouache-and-watercolor depiction of the Lockport locks, to Yolene Legend’s oil portraying a canal in Haiti.

“Madonna of the Canal,” by Elizabeth Leader, references an 1850 event involving an African-American family traveling northward on the canal. Caroline and William Harris lived in Philadelphia as free citizens but left that city after passage of the Fugitive Slave Act, which emboldened slave catchers to pursue all persons of color. After the boat left Albany, harassment and threats from other passengers led Caroline Harris to jump overboard with her daughter. Mrs. Harris survived; her child drowned.

The museum has also scheduled a series of workshops coordinated by artists. On Saturday, July 15, 10 a.m. to 2 p.m., Willson Cummer, who specializes in landscape photography, will lead a photography workshop. Then on July 29, Sean Kirst, the author and former Post-Standard columnist, will conduct a storytelling workshop from 11 a.m. to 2 p.m. Each workshop has a fee of $15.

There will be lectures on site and at other locations. On July 20, at noon, Anne Mosher, an associate professor of geography at Syracuse University, will discuss “Erie Canal 3.0.” at the museum.

Lectures at locales around upstate New York include “The Sacred Waters of the Haudenosaunee and the Trauma of the Erie Canal,” a presentation by Chief Jake Edwards of the Onondaga Nation and Phil Arnold, chair of the Religion Department at Syracuse University. The talk begins at 1 p.m. on Oct. 21 at Skä•noñh Great Law Center of Peace, 6600 Onondaga Lake Parkway.

The programs very much mirror the museum’s ongoing displays. On one hand, it’s a historical institution whose collection includes a survey journal compiled by Benjamin Wright, chief engineer for the canal’s Middle Erie division. And the museum owns commemorative medallions made right after the canal’s completion.

Most of all, the Erie Canal Museum is housed in the Weighlock Building, the only structure of its kind still standing in the United States. As its name suggests, the weighlock was used to weigh boats and settle their tonnage so that tolls could be assessed. 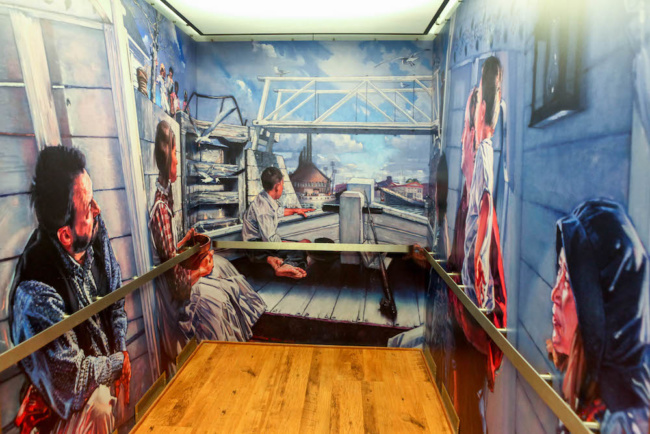 On the other, the museum long ago acquired a range of media and objects to help visitors better understand the Erie Canal and its legacy. These include interactive audio displays, a stonecutter’s tools and a chunk of aqueduct stone, various prints and paintings, exhibits designed specifically for children and a fully restored line boat. Murals by Corky Goss and Kelly Curry cover exterior walls, while Mark Topp’s wrap-around mural decorates the elevator.

Moreover, the museum views the canal as more than a transportation route: It was an information highway that facilitated the flow of ideas and culture. Thus, the museum presents images of Jermaine Wesley Loguen, a Syracuse abolitionist, and a trio of artists, Gustave Stickley, Adelaide Alsop Robineau and Henry Keck Jr. All three lived locally and took part in the Arts and Crafts Movement.

At this point, museum executive director Natalie Stetson is well satisfied with programs in place for the bicentennial and with tourists’ visits. That said, she wants to encourage locals to walk through the museum’s front door. Stetson said she still meets people “who say that they have lived here 30 years, but this is their first visit to the museum.”

Therefore, the museum implements marketing projects like the Gingerbread Gallery during the Christmas season and Wednesdays at the Weighlock, a summertime series of acoustic concerts staged every Wednesday through Aug. 30. On Wednesday, July 12, Mike Powell will play from 5 to 7 p.m., while Eric Wise performs on Wednesday, July 19. Admission is free, and $5 beers are served.

Stetson says the level of activity for 2017 has stretched the resources of a museum that has four full-time staff and four part-timers. It’s also an exciting time with the bicentennial offering enhanced opportunities for public education and reflection on the Erie Canal. This fulfills the museum’s mission of engaging with the canal in the past, present and future.