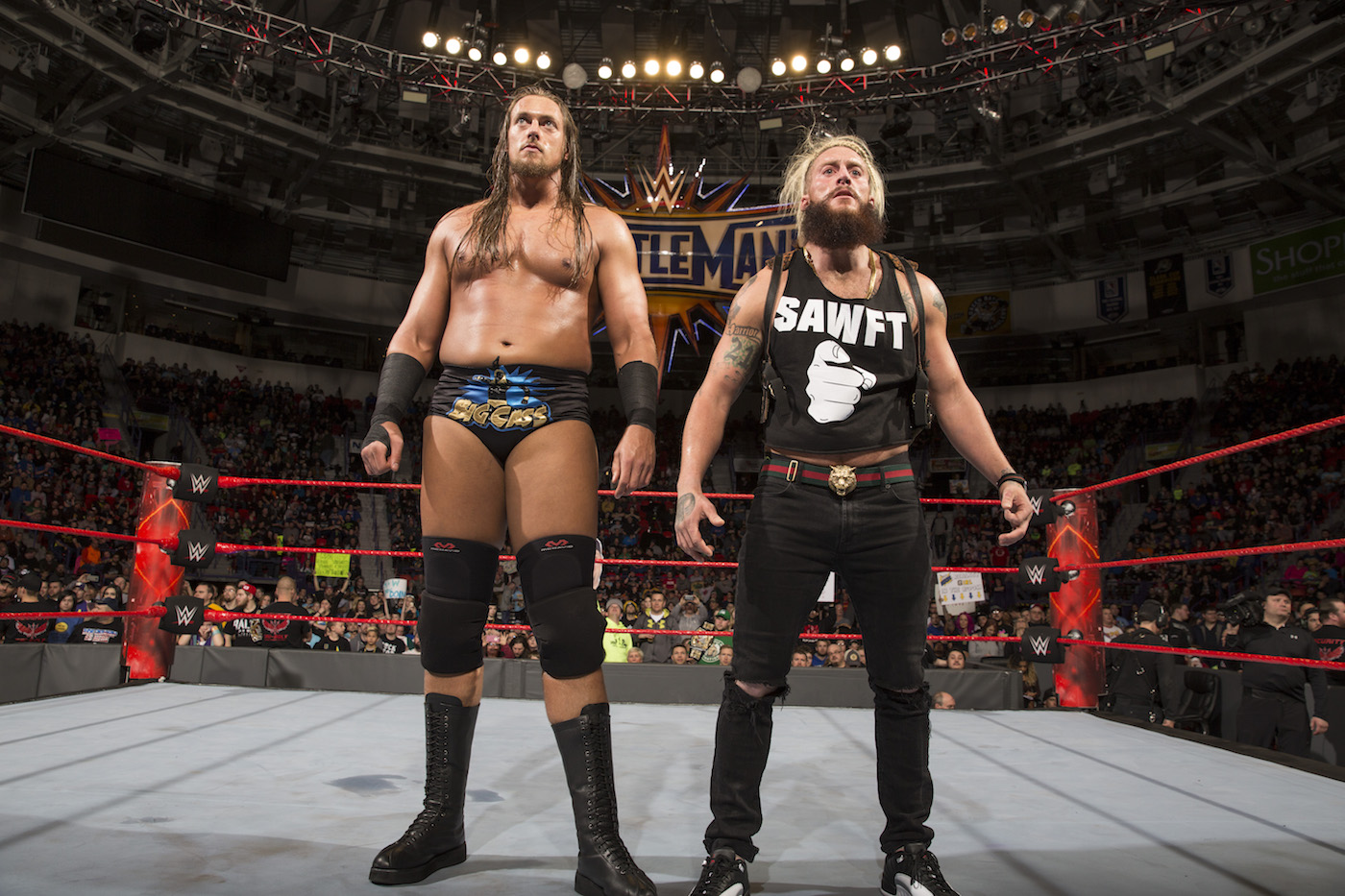 Big Cass is putting the wrestling world on notice.

Among the competitors will be Queens-bred William Morrissey, known by his ring name Big Cass. The nearly seven-foot pro wrestler makes up half of the duo known as The Realist Guys in the Room, which also features his crazy-eyed cohort Enzo Amore (Eric Arndt). The two are recovering from a March 5 loss at WWE Fastlane.

RAW Tag Team champions Luke Gallows and Karl Anderson stole the win. Amore was pinned after receiving Anderson’s patella to his cabeza, but he was cognizant enough after taking said hit to sling his foot over the bottom rope. Normally this would have qualified as a saving grace, but the referee did not see it and Gallows pushed Amore’s leg back onto the mat.

Big Cass reflected on the Fastlane bout and other subjects during a morning-after phone conversation at a busy Chicago pizzeria.

Before your involvement in wrestling and entertainment, you received degrees in pre-med and economics.

Yeah. From my younger years, I always planned on being a doctor, but I was also interested with getting into the WWE. Once I graduated, I gave wrestling a shot and it worked out. I’m living my childhood dream.

Chicago is great, man. I love Chicago. It’s simply a great city to grab some pizza and hang out.

Where did you and Amore/Arndt first meet?

We met playing basketball at The Cage (West Fourth Street Courts), a famous streetball venue in Greenwich Village in New York City. After the game we went for pizza at Famous Ray’s Pizza — the Original Ray’s — which is on Eleventh and Sixth, but they unfortunately closed it down a few years ago.

Years later you both run into each other and you’re both trying to get into the WWE.

It was pretty wild. I was with Florida Championship Wrestling (FCW) for about a year when he showed up. We had lost touch through the years. When he signed with WWE, I thought to myself that he and I would be very entertaining together.

Your tag team has an Odd Couple meets Mutt and Jeff dynamic. He’s very energetic and you’re collected. Has Amore always been this energetic?

Oh yeah. He’s the same type of person. He was a very scrappy basketball player and loved to run his mouth.

Is it difficult to keep a straight face at times?

It’s tough. There will be times where Enzo will do or say something that will crack me up. Seeing me crack up a bit is definitely noticeable. Why hold it back? Everyone else in the building and at home are probably laughing, too.

Have you received any feedback about last night’s Fastlane?

Yeah. We’re not happy about last night’s loss, that’s for sure. It wasn’t an honorable win for Gallows and Anderson. We didn’t lose, because Enzo had his foot on the rope. I’ve been hearing from the fans, and they’re not happy about it. Hopefully, we can rectify the situation tonight or somewhere down the line.

The wrestling world has to be significantly different nowadays, especially with social media. How do you manage negative feedback?

One way you can go about it is by ignoring it, but I don’t think that’s the way to do it. When you ignore it, you don’t see it. Negativity can also eat away at you. But I like to use it as fuel and as motivation to get and be better.

Being attributed as “The Realest Guys in the Room,” how have you seen your popularity grow through the years?

The fans look at us favorably. We just like to have fun, feed off their energy and give it right back. I think it translates well through the TV screen.

We’re not trying to play certain characters. We’re portraying ourselves. It helps us connect better to each other and the fans.

When you’re prepping for a match, television spot or interview, do you prepare or is it improvised?

It all starts with conversation. We’ll be in a car or we’re out eating, and things will just come out of our mouths or pop into our heads. There is so much material put together from sitting on the couch and hanging, watching football.

I just went to an elementary school this week and read Dr. Seuss’ The Cat in the Hat. I love to see the looks and how their faces light up when we walked in the room and while we were reading. It’s very special.

I also work with the Special Olympics, and that’s a big priority of mine.

What can the fans expect from the upcoming show?

Wrestling is one of the best, unique forms of entertainment out there. It’s the best value in live entertainment. Fans will see all their favorite RAW superstars: Kevin Owens, Sami Zayn, Roman Reigns, of course, myself and Enzo. It’ll be fun and intimate for the crowd that shows up. It’s not televised, and we’re catering for those who are present.