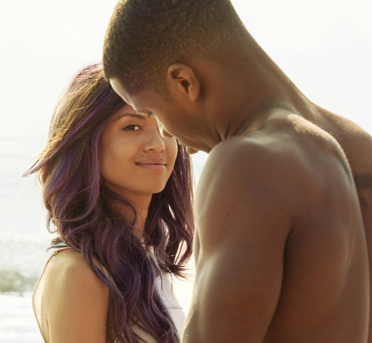 Think of any cliche that you’d expect to find in a modern day not-supposed-to-be love story, and you’ll find those mountains separating Noni and Kaz in Beyond the Lights.

She’s a star-in-the-making and he’s a working guy.

She’s got a pop star music label boyfriend but he’s got bigger muscles and a better mind.

He’s suspicious of her career and its manipulations and she’s envious of his consistency and honesty.

Their parents are convinced they are bad for each other.

Yes, indeed, writer and director Gina Prince-Blythewood knows the well from which she must draw the water for this story of a pop singer born poor in South London and policeman raised middle class in Los Angeles who meet in the most critical seconds of her life.

Noni perches despondent and conflicted on a high and posh balcony after an awards show in which she has won her first major prize, the piece that should signal the big rush toward really cashing in on all that’s been gathering on the horizon since her mom/agent has shepherded her and her sellable image to the very top. Kaz rushes in from his assigned guard duty in the hall when mom calls out in alarm. He uses every ounce of his training, strength and humanity to talk her back into her world. And his world. He sees the real her; she sees real comfort in that.

Prince-Blythewood has struck oil at the bottom of that well with the story, the actors, the soundtrack. The Saturday matinee crowd of about 20 in the small Regal theater at Shoppingtown — mostly young women relating to Noni’s soul — were all in, for the drama, the music, the romance, the conflict, the hope.

Gugu Mbatha-Raw owns the screen wholly and freely as Noni, both the extension-haired version all shiny, violet, and preening, and the curly-haired version all subdued, earthy and modestly confident. Mbatha-Raw’s screen credits give most props for her title character work as Belle, but I remember her best as the energetic and compelling Talia inspiring Tom Hanks’ slightly lost LA soul on a scooter in Larry Crowne.

Here, she’s happy to share her star with Nate Parker as Kaz the young cop with political aspirations of his own. Parker is the definition of solid guy with a good heart and busy mind, with just enough conflict of his own thrown in to keep it interesting.

Minnie Driver as mom-agent Macy Jean — or, as Noni decides, agent-mom — is shrill and annoying, just as the part is written. Danny Glover as ex-policeman and son-prodder, is the block from which the chip proudly fell, just as the part is written. Musical partner/semi-sex-guy-in-the-way Kid Culprit is played with swag by Richard Colson Baker (rapper Machine Gun Kelly), who gives a tender breakup scene one-on-one in his star trailer and then a hellaciously dickhead scene onstage during an awards show production number.

Young actress India Jean-Jacques must be mentioned for her turn as the young Noni in London at the start of the film, a duckling singing Nina Simone’s “Blackbird” at a school talent show under the too watchful eye of mom Macy. Later, when adult Noni and Kaz are hiding out and she first sheds the extensions, the similariy in looks with her young self smacked me, and good. And when she sang “Blackbird” a cappella at a karaoke mike, that, too.

Beyond the Lights goes so far beyond all those stereotypes needed to set it up. It’s not only entertaining in a big way, it carries an important and every house relatable message. Always know where your head and heart belong.

Big hopes for Johnny Depp
A critic passed who wrote many film opinions for L.A.
To Top