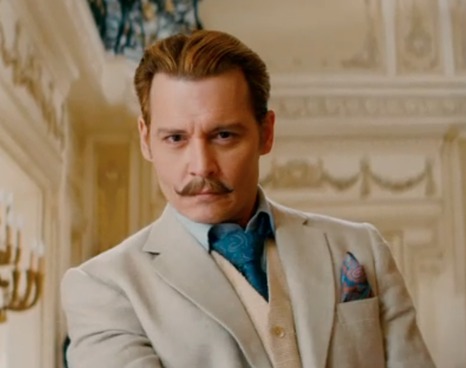 Johnny Depp has made me laugh in what was supposed to be a really big movie in the not too distant past. But when I was chortling at his Tonto bits during The Lone Ranger last year, I half thought maybe I wasn’t supposed to be.

Come Jan. 23, though, Depp and the makers of Mortdecai will definitely be pulling for everybody to be laughing for real. This new movie starring Depp and Gwyneth Paltrow as his wife is a farce based on the novels of Kyril Bonfiglioli. A Wednesday story on Cinema Blend by Kristy Puchko calls it an action-comedy in which Depp plays “a sophisticate with an eye toward crime and an impossible mustache.”

The story includes a clip of a trailer from Yahoo, which Puchko uses to spill a lot of beans about the plot, which includes art, ill-gotten gold and “nefarious causes.”

I’ve seen in-theater trailers for Mortdecai several times now, and Depp’s deadpan delivery, Paltrow’s arched eyebrow and a man-servant played by Paul Bettany all have have crept closer and closer to Pink Panther spoof territory to me. Everybody associated with the film can only hope so, you know? Or maybe it was Grand Budapest Hotel.

Nevertheless, as Puchko points out, The Lone Ranger lost a reported $175 million — no laughing matter that — and Transcendence “cost $100 million to make and brought in $23 million domestic. … All this to say that the age of Johnny Depp capering carelessly about in big Hollywood movies may be drawing to a close. And if he wants to continue, both Into the Woods (which opens Christmas Day) and Mortdecai better blossom at the box office.”

No Jennifer Lawrence to make you feel dumber

Fans holding their breath to see Jennifer Lawrence as the younger Fraida Feltcher in this weekend’s release of Dumb and Dumber To can exhale now.

According to a Wednesday story by Eric Eisenberg for Cinema Blend, the Farrelly Brothers spilled those beans to him at their sequel’s press day last weekend when he asked them point blank, yes or no.

Reports of Lawrence’s cameo had surfaced when both Dumb and Dumber To and the latest Hunger Games franchise piece were both filming at the same time in Atlanta, Eisenberg writes. And since the Hunger Games’ Woody Harrelson had been the star of the Farrelly Brothers’ 1996 film Kingpin – the follow-up to DADT – they talked about Jen coming over for a shoot with Jim Carrey and Jeff Daniels, whose Harry and Lloyd fought over Fraida in the original.

But the timing did not work out, Eisenberg quotes Bobby Farrelly as saying. Instead, opening weekend DADT fans will have to live with Kathleen Turner as the grown-up Fraida.

Writes Eisenberg: “… the good news is that the movie does feature some surprise appearances. As Peter Farrelly explained; ‘There are other cameos in the movie, if you watch the end credits.’ ”