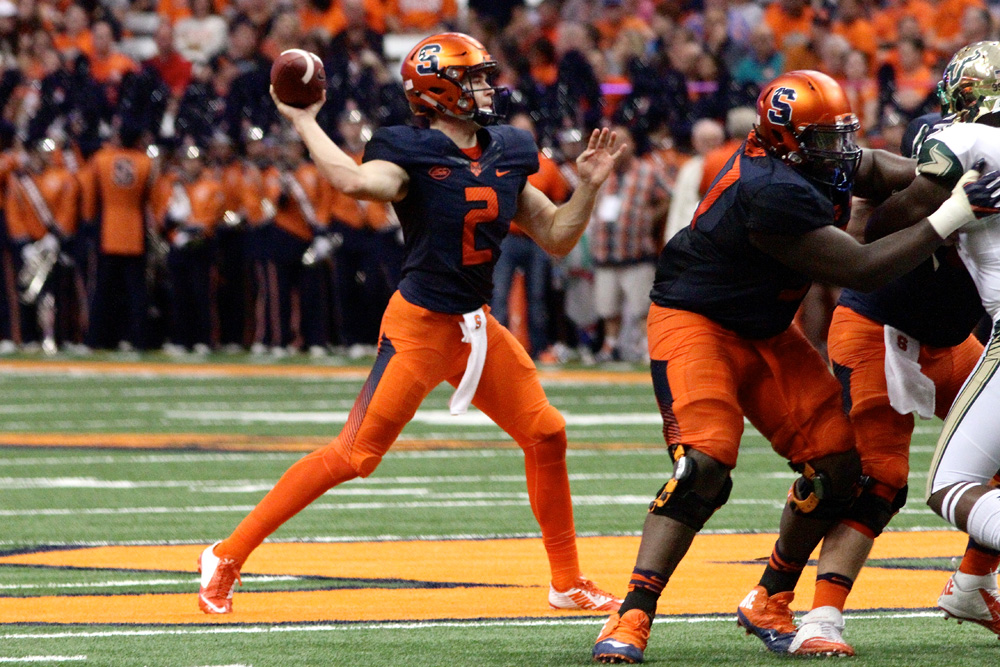 Dino Babers’ risk-taking methods have yet to pay off for the Orange.

Four minutes into the second quarter of the Sept. 17 game against South Florida, the Syracuse University Orange football team faced fourth down and four yards to go at its own 47-yard line. On the strength of 17 first-quarter points, the Orange was leading the heavily favored Bulls 17-7 on Homecoming Day at the Carrier Dome. 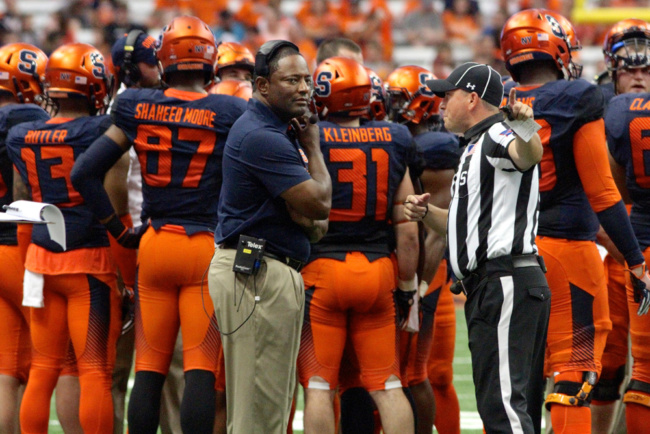 Dino Babers is the first-year Orange coach who is trying to accomplish what Robinson, Marrone and Shafer could not over the past decade: Turn the Orange into a consistent winner. Babers, who unlike the three previous coaches is known for his offensive creativity, decided to go for it.

The move backfired. Quarterback Eric Dungey’s crossing pass was too high and brushed off the fingertips of wide receiver Steve Ishmael. The Bulls covered those 47 yards in five plays and scored their second of four second-quarter touchdowns on the way to a 45-20 romp before 32,288 fans, the largest crowd in Syracuse’s three-game homestand to open the season.

“You saw numerous dropped balls by the (South Florida) receivers, true? And you saw guys that were open and balls going on the ground. If they’re making those catches, it’s a different game. Now, you get the positive with the negative, but as a coach, I have to be able to look at it and make a decision based off of what I believe is going to happen. And what I believed was going to happen is that we needed those fourth downs to win the game.

In the end, Babers was exactly right. The Orange couldn’t keep up with South Florida’s superior talent, particularly with SU’s injury-riddled secondary. Ironically, the Bulls broke open what was a one-possession game on their own fourth-down gamble that resulted in Marlon Mack’s 52-yard touchdown run that gave South Florida a 35-20 lead at the end of the third quarter.

In the Sept. 14 issue, we wrote that for the Orange to get where it wants to go, it will have to consistently beat the mid-level teams on its schedule such as South Florida, Connecticut (the next opponent on Saturday, Sept. 24), Wake Forest, Boston College and North Carolina State. That’s why, we opined, the games against South Florida and Connecticut would be better indicators of SU’s progress than the first two games against Colgate (a predictable 33-7 win) and Louisville (a predictable 62-28 loss that actually looked better after the No. 10 Cardinals’ 63-20 rout of No. 2 Florida State this past Saturday).

That remains true, although South Florida is clearly at the high end of the mid-level bracket. And we’ll see how the Orange fares in its first road game this weekend against a defensive-minded Connecticut team that’s 2-1 with wins over Maine and Virginia (13-10 this past Saturday) and a loss to Navy. But by going for it on fourth down in that situation against South Florida, Babers was showing us what he has been telling us: It’s going to take a while to get this program where it needs to be.

And you know what? That’s OK if it takes a few years before the offensive players fully grasp Babers’ high-speed offense and the defense finds the talent and creates the depth to stop teams like South Florida. Let’s enjoy the ride and appreciate that Babers fully understands what he’s dealing with, and he’s willing to share that with us.

Orange men’s basketball single-game tickets will go on sale to the general public Oct. 18 with a “Dynamic Pricing Plan” for select games. Before the season starts, the individual game prices are based on the opponent and will fall into four categories:

Once the season starts, the prices may change daily based on demand and remaining inventory. Season tickets, including a new $250 section at the Carrier Dome, are on sale now. For more information, visit cuse.com/mbbtixpricing or call the Carrier Dome box office, (888) Dome-Tix.