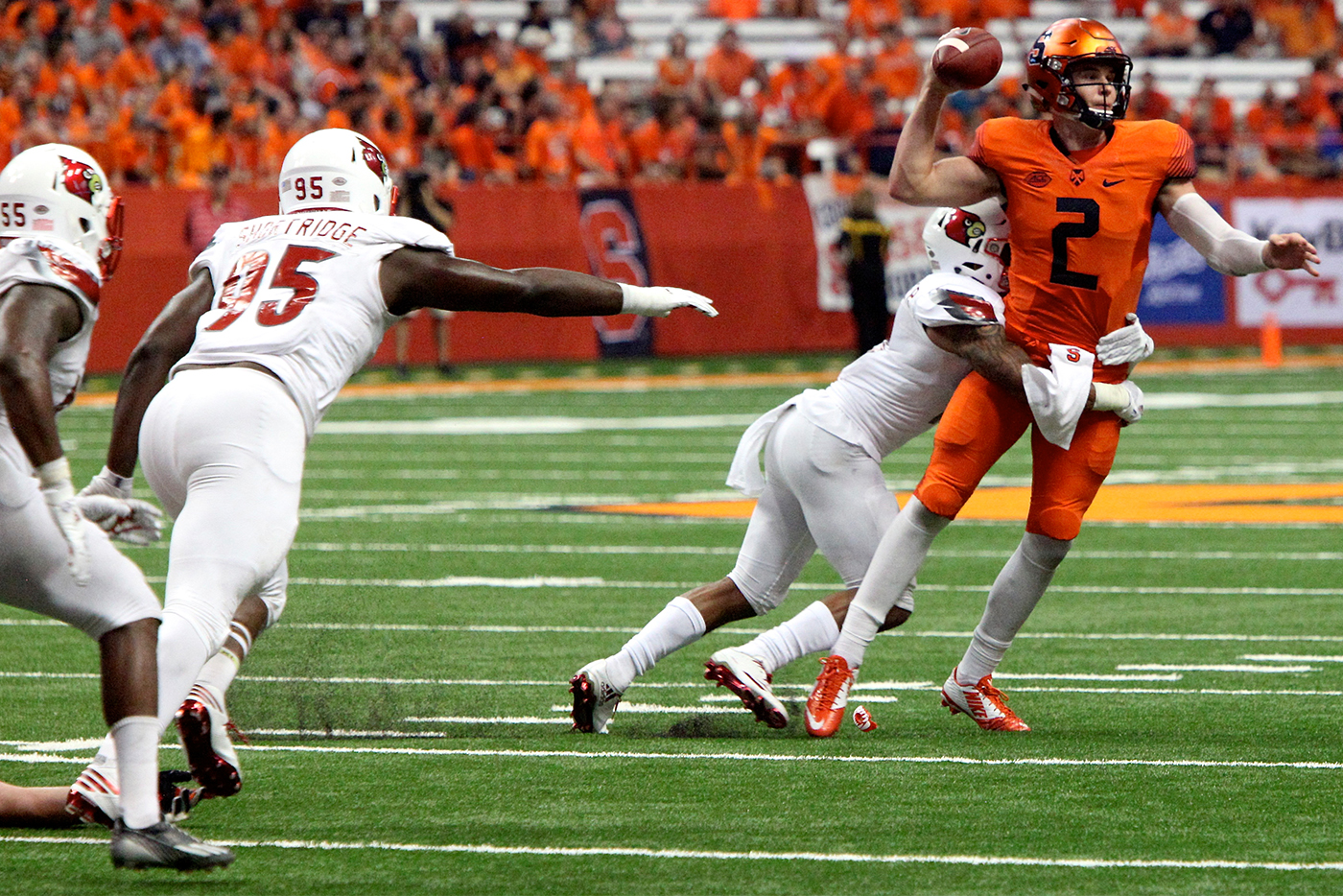 The Orange football team looks ahead after being blown out at home.

Dino Babers’ mantra from the start of his tenure as Syracuse University’s football coach has been “Belief without evidence.”

In other words, be patient and have faith that his system is going to eventually work, even if the early results don’t show it.

Through two games, that was probably a wise approach. In SU’s Sept. 2 opener, Babers’ up-tempo offense set several records as the Orange throttled outmanned Colgate 33-7 at the Carrier Dome. But in SU’s second game on Friday, Sept. 9, the roles were reversed as No. 13 Louisville rewrote the record book by thumping the not-ready-for-prime-time Orange 62-28 before a loud but surprisingly small crowd of 32,184 at the Dome. 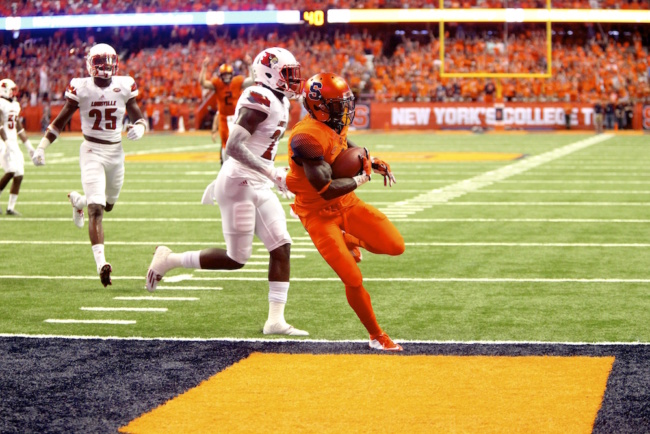 “We understand that we’re a little bit different and the numbers might be alarming for some people,” Babers said. “But whether it’s a one-point loss or a nine-point loss, it’s still just one loss.”

That’s true, although one might argue that a 34-point loss is quite different from a nine-point loss. Still, even SU fans with the brightest of rose-colored glasses understand the Orange is not ready to defeat a top-15-type team with a Heisman Trophy candidate at quarterback (Lamar Jackson).

The next two weeks, however, are a different story as the Orange hosts the University of South Florida on Saturday, Sept. 17, 3:30 p.m., at the Dome, and then visits Connecticut Sept. 24. As far as we’re concerned, these contests should be submitted into evidence as the games in which Syracuse has to show improvement if it’s ever going to climb out of its 15-year hole of mediocrity.

Every year, the Orange’s schedule is littered with middle-of-the-pack opponents such as South Florida, Connecticut, Wake Forest, Boston College and North Carolina State. If SU starts winning these games on a regular basis, it will qualify for bowl games and eventually get back to the point where it can occasionally upset an Atlantic Coast Conference power such as Florida State and Clemson or a top-ranked team such as Louisville.

“I think we did get better. We just played a significantly better team,” Syracuse middle linebacker Zaire Franklin said. “No disrespect to Colgate. Obviously Louisville’s talent level is just at a different place. I think we learned a lot about ourselves as a team tonight and that’s what’s going to help us moving forward throughout the rest of the season.”

Last season, the Orange played its first road game at USF and the Bulls scored 35 second-half points to defeat SU 45-24. After four consecutive losing seasons, USF went 8-4 during the regular season and lost to Western Kentucky in the Miami Beach Bowl.

The Bulls are 2-0 this season after routing Northern Illinois 48-17 this past Saturday in Tampa, Fla. USF racked up 658 total yards, the second-highest in school history, as quarterback Quinton Flowers accounted for 403 total yards and four touchdowns and reserve running back Darius Tice rushed for 120 yards and a touchdown. Tice filled in for two-time 1,000-yard back Marlon Mack, who missed the game because of a concussion but is expected to return against SU.

So it appears SU will have to win a shootout and the Orange’s high-paced offense will have to be sharper than it was against Louisville, when it accumulated 426 yards in 93 plays (4.6 yards per play).

“Personally, I think it was the decisions on my part,” said SU quarterback Eric Dungey, who completed 25 of 51 passes for 255 yards with three touchdowns and one interception against Louisville. “I have to be more fluid with my game. It starts with me. So I’ll take account for that.”

Defensively, the Orange surrendered an ACC-record 845 yards and the electric Jackson accounted for 610 of them with 411 through the air and 199 on the ground. Jackson, who rushed for four touchdowns, became the first quarterback in FBS (Football Bowl Subdivision) history to throw for 400 yards and run for more than 175 in the same game.

“When we don’t score, we all get mad at ourselves. We have to score every time we’re on the field. That’s our job,” said Jackson, who has either rushed or thrown for 13 touchdowns and has accounted for 1,015 yards in two games this season.

The SU defenders didn’t know what hit them at the start as the Cardinals scored three touchdowns in the first 4:43 of the game and four touchdowns on their first five possessions. But the defense tightened up, allowing the Orange to pull within 14 at halftime and again midway through the third quarter, before tiring at the end as Louisville put up 20 garbage-time points in the fourth quarter.

“Honestly, playing against a team like Louisville, it shows us exactly where we are at going against a really talented team,” Franklin said. “And now when we get in the film room we can be extremely critical of ourselves and hold ourselves accountable and make sure we keep pushing ourselves to be at the level we want to be at.”

For now, that goal should be to reach the same level as South Florida. We’ll see Saturday if there’s any evidence that the Orange is close to that.