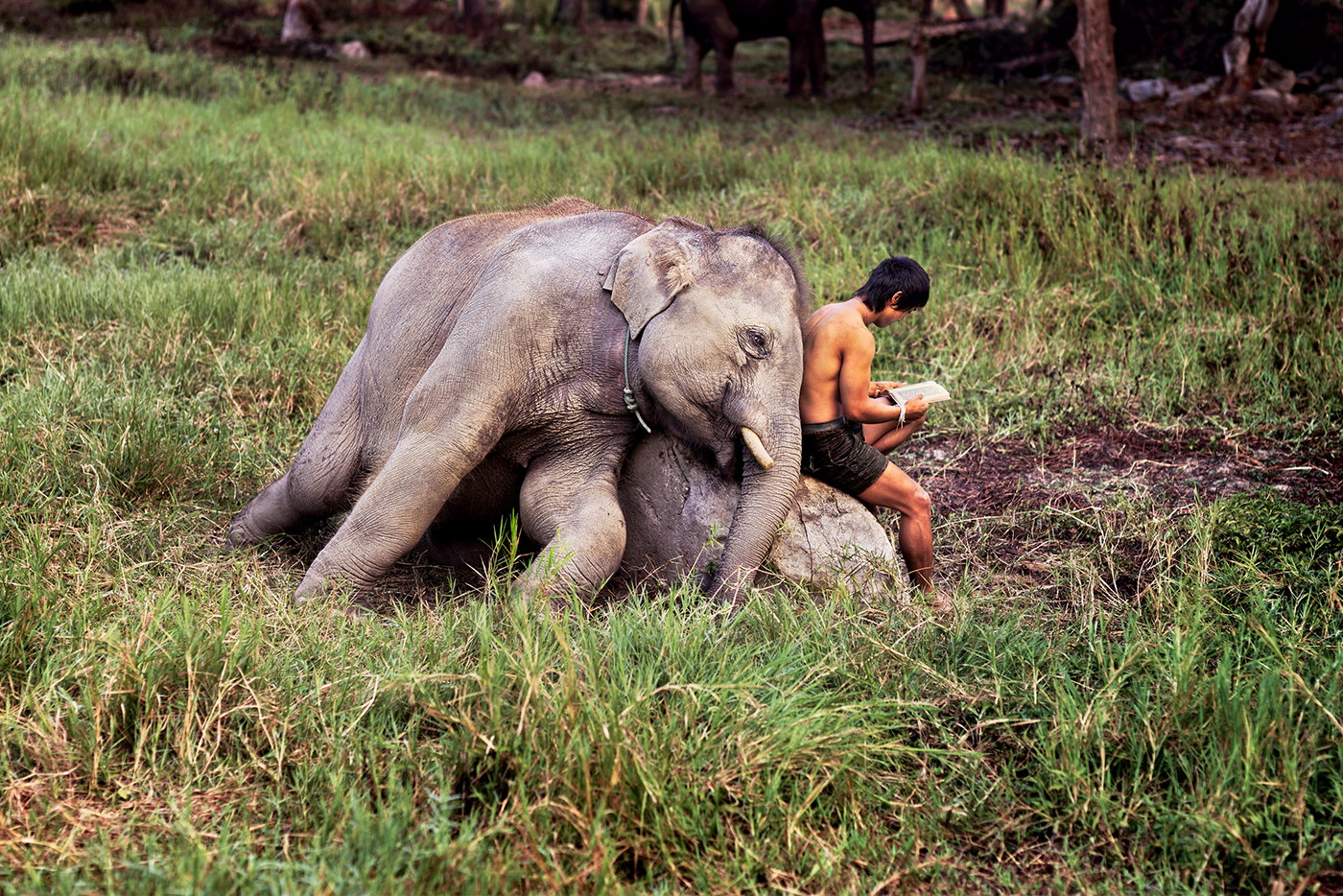 Drawn from a portfolio created over a 40-year career, The World Through His Lens encompasses images shot by National Geographic photographer Steve McCurry in countries ranging from Cuba to Croatia, from India to Ethiopia.

The exhibition, now hanging at Utica’s Munson-Williams-Proctor Arts Institute, depicts varied subjects: monks praying, teenagers playing soccer, people walking by a mosque in Djenne, Mali, and yes, Sharbat Gula, often referred to as “the Afghan girl.” In 1984, McCurry photographed her in a refugee camp in Pakistan, and that portrait became an iconic image. 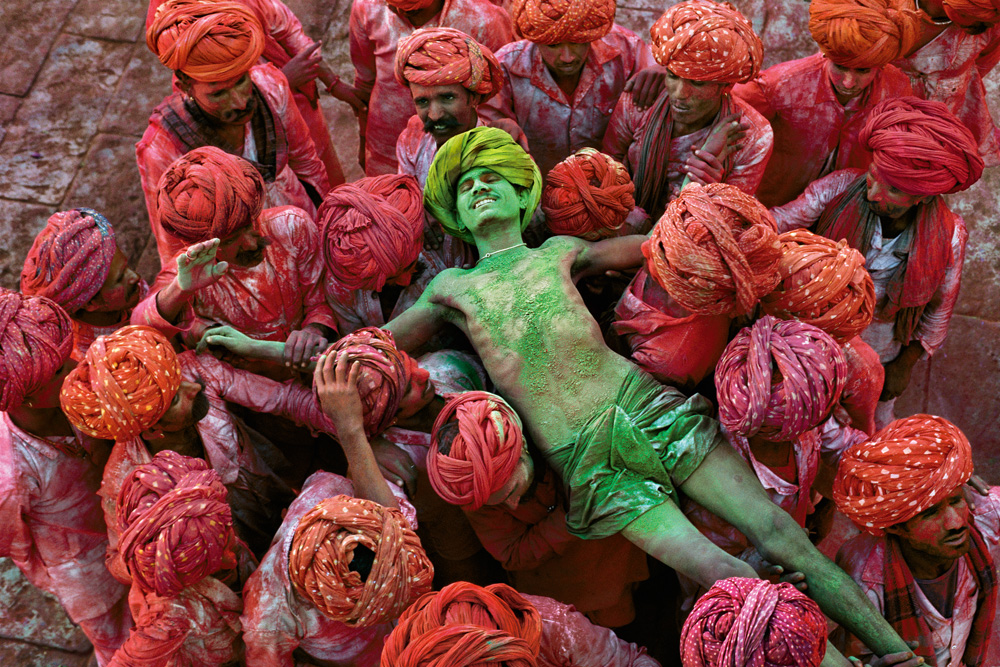 Man gets carried by a group of men at Holi festival. Photo by Steve McCurry

Yet such portraits are a small segment of the 60-image exhibit. It opens a larger conversation, one focusing on McCurry’s interest in people, places and color, on photography of the movement and other work.

Certainly, the show documents McCurry’s skill as a street photographer. It displays shots of a boy running down an alley in Jodhpur, Rajasthan, India; of breakfast tea being passed from one train car to another on a Pakistan rail line; of an Indian man in the Yamuna River and covered by shadows outlining the Taj Mahal, a structure known around the world. In Mayanmar, once known as Burma, a lone fisherman keeps his balance on a boat as it floats on Inie Lake.

In addition, there are images best described as slice-of-life photos; they convey scenes that resonate anywhere on our planet. In Helmand, Afghanistan, a father holds his son. In Havana, Cuba, teens play soccer in the evening. And in Moscow, Russia, a dog sleeps near St. Basil’s Cathedral.

While the workplace isn’t a major focus for this exhibit, it does have interesting photos relating to people at work. After a monsoon flood in India, a tailor is in water almost up to his neck; he struggles to keep his head and a sewing machine above water. Off a Sri Lanka coast, fishermen stand on stilts. A flower seller uses an oar to guide his boat, full of flowers, on Dal Lake, Kashmir. The shot merges red flowers, greenish water and a view from behind the man.

Elsewhere the exhibition more fully explores McCurry’s interest in religion and houses of worship. An image of the Mud Mosque, built centuries ago in Djenne, Mali, contrasts with a panoramic shot of the Hazrat Ali Mosque, a larger and more modern structure in Afghanistan. “Redboy” depicts a devotee of Ganesh, a Hindu deity. In Rangoon, Myanmar, a group of nuns walk down the street on a rainy day. 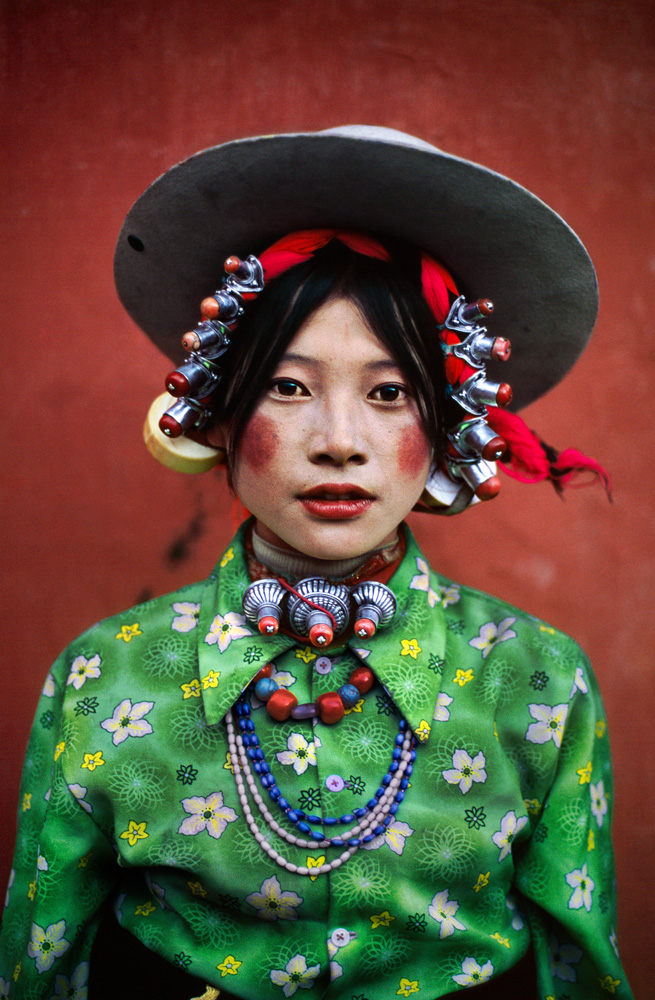 The show’s best three images access religion in some fashion. Monks pray near Golden Rock, an important site for Buddhists; the rock is so huge that viewers will wonder why it hasn’t tipped over. In Kam Province, Tibet, a very young monk holds flowers that will be offered in prayer; not far from him, an adult monk stands in a prayerful stance. A third photo captures dawn in a remote location of Kandahar Province, Afghanistan, where Kulch nomads have gathered for morning prayers.

Beyond that, McCurry’s exhibition is complemented by photos that touch specifically on the Utica area. Portraits of Hope, a selection of images taken by Lynne Browne, depicts 30 people who have resettled there: Karen people from Myanmar, Sudanese, Somali Bantu, Bhutanese-Nepali and Palestinians.

Sylvia de Swaan’s black-and-white photos portray refugees taking part in a class for adult learners. She brought a singular perspective to that project; during the 1940s, her family fled Romania, first to escape the ravages of fascism, and then to get away from a communist government. Her photo series, Return, dealt with her travels in Europe after being away for 50 years.

And there were events taking place outside the exhibition’s realm. Even as the show was first opening in June, controversy arose over some of McCurry’s images being Photoshopped. In an interview with Time magazine, his comments were both straightforward and murky. On one hand, he said he would make sure that his photos weren’t Photoshopped. On the other, he said he considered himself to be a visual storyteller, not a photojournalist. It wasn’t clear when he first drew that distinction.

In the end, the controversy has little impact on The World Though His Lens, although there are a few limitations. For example, the show has no images that McCurry took in areas of armed conflict. It has none of the photos that appeared in Deep South, a 2015 book describing author Paul Theroux’s travels through the southern United States.

There are also limitations of another kind. McCurry isn’t offering a definitive view of life in India or Afghanistan or even the American South. He’s one photographer with specific interests, such as Buddhism, and abilities. Among other things, he’s able to use color effectively, to generate emotional appeal, and to depict subjects in a direct manner.

The World Through His Lens presents his work in a museum setting, with an opportunity to view large prints and to listen to audiotapes regarding McCurry’s images. It’s possible to hear comments from the photographer himself and from teenagers interviewed at a community center in Utica.