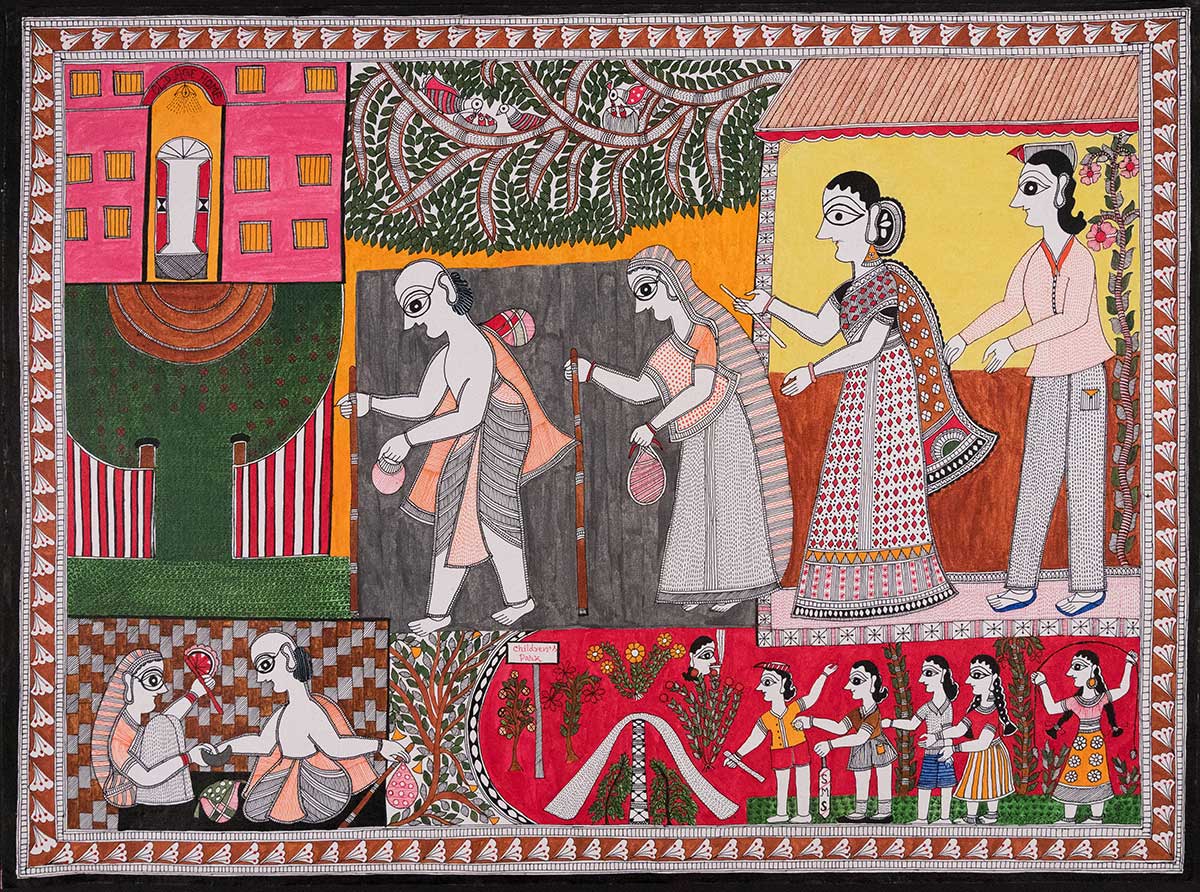 ArtRage Gallery’s new show features artworks bridging traditional forms and contemporary issues. On one hand, From Gods to Social Justice: Indian Folk Artists Challenging Traditions presents an array of hand-painted scrolls and Mithila paintings, media long popular in eastern India. On the other, most of the works deal with current-day issues: pollution, elders living in poverty, HIV/AIDS, dowry-related violence. There are instances in which a bride is threatened or even murdered by in-laws because they deem her family’s dowry and gifts inadequate.

For example, “The Burning Bride,” by Mahalaxmi Karn and Shantau Das, has bright colors and intricate lines associated with Mithila painting. Yet it depicts a bridegroom in ceremonial headdress holding his wife over a fire to burn her alive.

Similarly, a Mithila painting by Shalinee Kumari portrays Mother Earth and Shiva, a supreme being in Hindu theology who creates and transforms the universe. Here he drinks away toxins to protect Mother Earth. A second Kumari painting, done in exquisite detail, discusses inequality of women in Indian society.

And “Saving The Forests” by Anamika Kumari shows views of life with or without trees. In one panel, an abundant forest provides cool shade and a basis for community life. In the other panel, the landscape consists of chopped-down trees, barren soil and dead animals.

In addition, the exhibition displays multicolored story scrolls such as “Tsunami” by Madhusudan Chitrakar. It references a 2004 underwater earthquake that caused a tsunami which devastated coastal communities not only in India but around the Indian Ocean. Thousands of people died. The scroll is full of swirling figures, demons, serpent shapes, people and animals engulfed by angry waters.

Elsewhere, “Nandigram Resistance,” by Madhu Chitrakar and Hazra Chitrakar, revisits a 2007 rebellion in which peasants and their supporters opposed a regional government’s efforts to acquire land for industrial development. The scroll, beautifully painted, recounts several incidents and is accompanied by a narrative providing additional information.

For contrast, From Gods to Social Justice includes a few older pieces that aren’t issue-oriented. One portrays Durga, the warrior goddess who works to destroy evil on earth. She has multiple arms, and each one holds a weapon.

Beyond that, the show details changes in folk art. Mithila painting, which began in the northern state of Bihar, was once done by women on walls in family homes. Today Mithila artists paint on paper, and their ranks include men and women. A few artists, like Shalinee Kumari, have shown their paintings in galleries located in India, Europe and the United States. There’s also an explanation of how story scrolls, painted by the Patuas of Bengal, have evolved.

The exhibit deftly explores such themes with the assistance of Geraldine Forbes, professor emerita at SUNY Oswego, and Susan Wadley, Ford Maxwell professor of South Asian studies at Syracuse University. Indeed, all the artworks come from their collections. They share a passion for the history, art and culture of India.

Clearly, the show covers a lot of ground, but it’s not intended to overwhelm viewers with information. Rather, it presents multiple artworks, some in eye-popping colors, and returns again and again to a fundamental notion: Humans in various cultures tell stories. The cultural vehicles may change, but storytelling remains essential. From Gods to Social Justice explores that notion in depth and does so with much visual appeal.