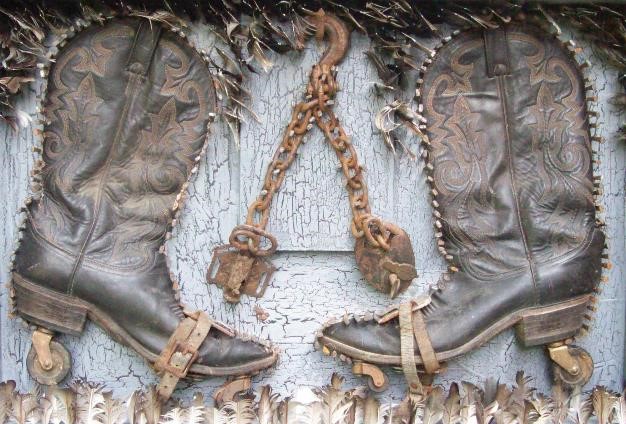 The 2016 presidential campaign has inspired a wave of media coverage including books, panel discussions on television and radio, and essays analyzing the viability of our current political system. It also was the starting point for Jim Ridlon’s current series of assemblages. Discord & Dissent: Commentary on Contemporary Politics displays 21 of Ridlon’s pieces at the ArtRage Gallery, 505 Hawley Ave.

In watching the campaign, Ridlon was struck by the antics and soap-opera performances of several candidates. He started working on the assemblages, combining and arranging everyday materials: found objects such as wrenches or cloth or rusted scissors or other items.

Each piece creates visual puns, metaphors subject to a viewer’s interpretation. The works all reference the political arena but don’t mention specific candidates, polls, and the notion of red states and blue states.

There’s no template for the artworks; instead, Ridlon keeps on improvising. A piece like “Budget Cutters” is relatively straightforward. It presents five pairs of scissors, referring to the notion of budget trimming and a lack of consensus on budget changes. 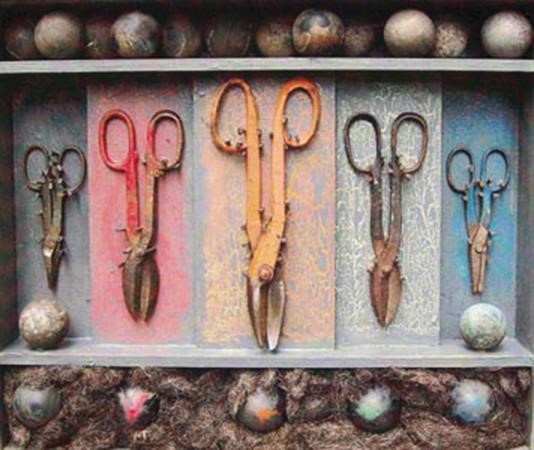 There are also more complex works. In “Training A Hawk,” Ridlon plays with pieces of bark shaped to depict a bird and gloves, reminding viewers of the gloves worn by falconers when they train their charges.

In addition, the text for “Rising Star” discusses a generic candidate whose fortunes are improving. With that surge, he or she faces intense criticism from rival candidates and greater scrutiny from the media. In this assemblage, the artist worked with material implying a skeleton in the closet and pieces of cloth folded in a way that suggests a bogeyman. 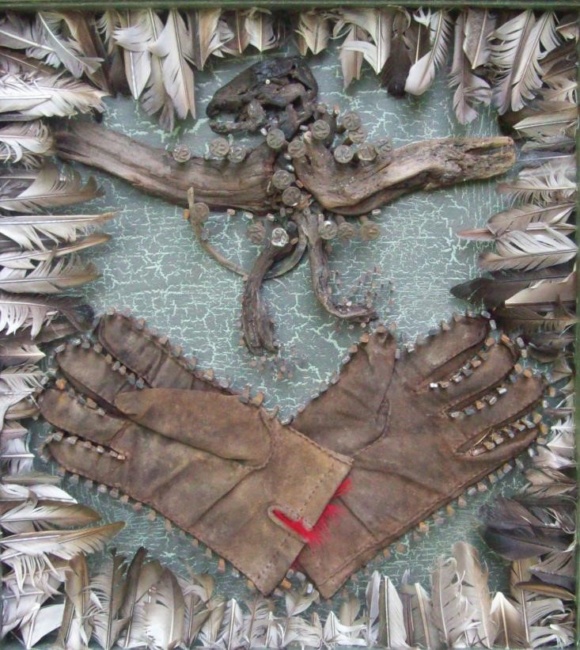 “Fake News,” meanwhile, has a bunch of inserts from shoes at the bottom of the assemblage. They symbolize tongues that wag and spread false information.

Other artworks communicate on a visceral basis. “Reach for Power” comments on a quest for power and dominance, combining steps of a ladder, pliers and other tools, and a tiny, carved-up figure. Along the way to the top, even close political advisers and friends are sometimes pushed aside or destroyed.

“Catching The Wind” works on several levels. On one hand, the inclusion of a small, wooden boat, rope and a mast certainly refers to the art of sailing and the notion of gaining momentum during a campaign. On the other, the freedom of sailing contrasts with compromises made by candidates beholden to financial contributors.

Elsewhere, Ridlon scores with the physicality of “Hold Outs,” with its selection of wrenches; the discolored backboard in “Spilled Secrets”; and the playfulness of “The Juggler,” as small hands, like those from a set of toys, reach out for balls. These pieces are clever and whimsical, visual puzzles meant to be considered and enjoyed.

The exhibition plays an additional role as it entices viewers to contemplate the defects of the political process and possible solutions. Ridlon isn’t offering a how-to primer on how to change campaign- finance practices or voting rules or media coverage. Instead, he’s challenging viewers to look at familiar problems with fresh eyes. 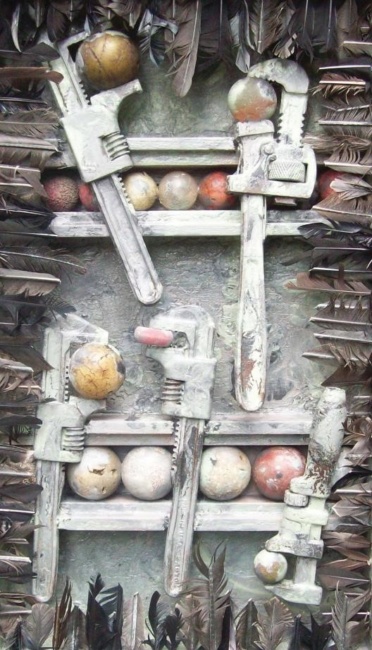 Ridlon again demonstrates his ability to skillfully execute disparate artistic projects. During his long career, he’s done paintings celebrating nature, made a bronze sculpture for the Outland Trophy awarded to the top lineman in college football, and created a bevy of other artworks.