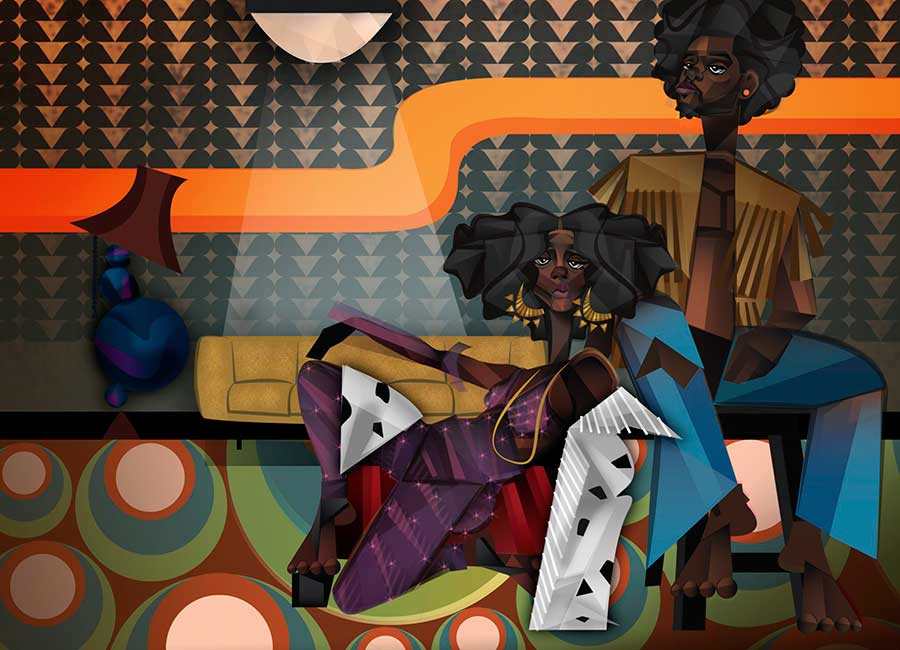 Just a quick glance at the 16 illustrations and a mural establishes that there’s no prototype for Campbell’s work. In “Just Jiving,” a bearded man sits on a chair, and blue and orange colors dominate. The chair’s top is enlarged into a circular shape.

“Just a Touch” takes a different approach in its depiction of a man and woman. She’s engulfed by a series of patterns, just one example of how Campbell eschews straight-up figuration. In “Ain’t No Thang,” he portrays five men, with one subject’s torso intact and a dab of blue filling in for legs. Again, bold colors, red and orange, energize the piece. “Got to Give It Up” depicts a woman and man; he’s elongated in his head, neck and upper body with a vertical pattern running downward. Diamonds and an orange pathway also appear in this illustration.

In other pieces, Campbell stays on the move. “Sheba’s Return,” portraying a woman, plays with long vertical lines and lots of gold and brown. Like many of the artworks, “Do You Love What You Feel” has multiple elements: a couple, X’s and O’s on the man’s shirt, patterns, a background made up of shelves holding pottery.

Campbell, it should be noted, works with various backgrounds for the illustrations. Sometimes, it’s a domestic scene, augmented by stripes or overflowing vegetation. However, “Kuumba Ujima Women,” one of the best pieces in the exhibit, positions three women against a stripped-down background. In addition, “Mt. Blackmore” portrays faces only side by side, providing a row of profiles.

In various works, the artist deals with a range of facial expressions: joyous, anxious and somber, among others. Beyond that, the illustrations clearly depict individuals but that’s not their only context. A piece such as “The Hard Way” conveys a sense of community, and so does the entire show.

Finally, the mural, which occupies an entire gallery wall, allows Campbell to create within a larger space. Its centerpiece combines images of five people, an extensive dose of green color, the sun, and other facets. At each end of the mid-mural area, a man holds a staff or rod. That motif may have biblical overtones; it’s subject to a viewer’s interpretation.

This one-man show clearly isn’t the first time Campbell has shown his work in public. He took part in a pop-up, group exhibit at 745 N. Salina St. and in a group exhibition at the Everson Museum of Art this spring. Moreover, he did an illustration of Harlem Renaissance poet Langston Hughes for the Syracuse Cultural Workers. That image, accompanied by Hughes’ poem “I, Too, Sing America,” appears in poster and print formats.

Nonetheless, a solo exhibition provides an opportunity to view a body of work instead of just a few pieces. Feel That Funk documents a taste for variety, a willingness to employ striking colors and multiple forms, and Campbell’s integration of various influences. It’s a fine platform for an emerging artist.

Blowing it up from the inside: How punk rock, cartoons influence artist Tommy Lincoln
Capitolfest 16 in Rome screens a weekend of buried Hollywood treasures
To Top