In ‘American Hustle,’ the con is always going strong.

Like many fine flim-flam films before it, “American Hustle” brings to the table questionable people with good hearts, law enforcers with shifting motives, and quite a few folks who fall someplace in between.

The 129 minutes of drama, comedy and mystery directed by David O. Russell and written by Russell and Eric Warren Singer quickly introduces the pivotal con man. Irving Rosenfeld, a hustler with a belly paunch and complicated comb-over, is played wonderfully by Christian Bale as a fast talker with many levels of immorality.

A flashback to Irving’s youth shows how he started on this path by breaking windows with rocks. His dad, you see, was in the window glass business.

As an adult, Irv owns a chain of New York City dry cleaning stores, operates a sketchy art sale business and lines up desperate types with the promise of a big loan for a smaller down payment.

Then he meets Sydney Prosser, a savvy woman played with intelligence and sensuality by Amy Adams. It’s quick love for both of them. Irving flaps his gums and Sydney bolts out of the sketchy office door. He’s despondent, kicking himself for spilling his dirty secrets so soon. But the door bursts open, it’s Sydney with a better mousetrap.

As good as Sydney is with laying the bait as the Brit-accented Edith, one of the rats she attracts is FBI undercover guy Richie DiMaso. Bradley Cooper plays the agent as a guy who talks as fast as Irving and also has big plans. He enlists Irving and Edith to catch bigger fish with further cons. Richie really likes Edith, and she likes that. 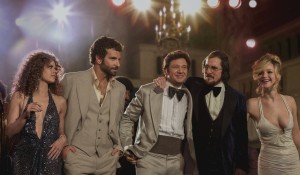 A sheikh becomes involved — the story, set in the humor-rich fashion and cultural oddity that was the late 1970s, points to the real-life sting called Abscam — and a New Jersey mayor who wants to rebuild Atlantic City becomes a target. Jeremy Renner plays Mayor Carmine Polito as an earnest politico who thinks he’s always keeping his constituents’ interest paramount no matter the legalities.

Into this mix is thrown a wife and adopted son. Yup, Irv is hitched to Rosalyn, played on perpetual edge by Jennifer Lawrence.

As the sting keeps getting bigger, the emotional stakes ramp up, too.

Those folks you thought you were going to love to hate, well, you may just flat-out love some of them. And hate yourself a little for it.

Ready to take the fifth?
Opening on the big screen
To Top