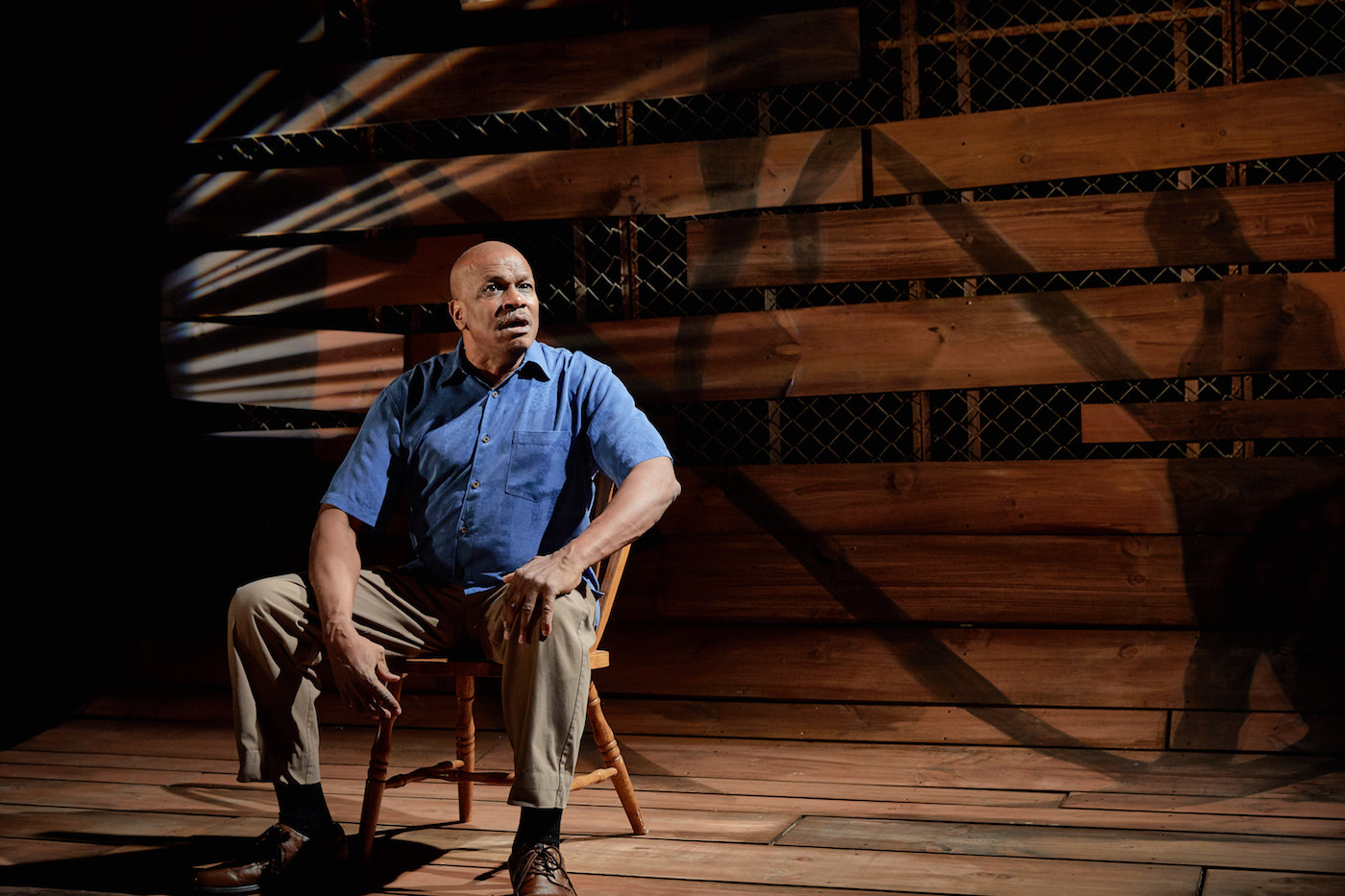 When an actor writes a one-man show for himself to perform, you can expect he will find means to express his versatility and strengths. When that show is also autobiographical, the actor can immediately answer Stanislavsky’s question about emotional memory. To make that show a drama, he has to lay off the successes but emphasize the conflicts.

Therefore you can expect that Alexander Thomas’ Throw Pitchfork (now at Ithaca’s Kitchen Theatre Company through Sunday, May 7) would be gripping with many rapid changes of tone and mood. The surprise is that the 75-minute one-act would offer so many moments of gut-deep hilarity.

Thomas is an African-American professional performer who has appeared often at the Kitchen, despite living now in Berlin, Germany. He has credits from all over western Europe (such as being directed by Steven Berkoff at London’s Haymarket) and was memorable in Ithaca as the wary cellist in Michael Hollinger’s string quartet comedy Solo (October 2012). His Throw Pitchfork came first to the Kitchen in 2002, immediately after its off-Broadway debut, and has since been produced everywhere.

Action begins with harsh aggressions by an older black man surrounded by barking dogs. We perceive slowly that this is the author’s father, Willie, a man given to violent rages. It does not take long to get to the explanation of the title when a drunken Willie throws an actual pitchfork with lethal intent.

As so many actors are sensitive artistic sorts, our default expectation is that we are going so see youth defined by conflict with age. Not to be. This is not a Victorian novel but rather a stage work composed in the 21st century. Thomas never proceeds chronologically or in any straight line but instead goes from theme to theme, often with quicksilver changes of voice and body set. He expects we will retain little units of information until we can place them next to larger insights.

Terrified as the playwright-as-child might have been of his father, the adult sees the whole man as a victim of Jim Crow Alabama. The boy Willie was wrongly accused of a crime but convicted with trumped-up circumstantial evidence and given a long prison sentence. There he becomes a dog-tender, one of the reasons the playwright associates his voice with barking. He fathers four sons, Sammy, Jesse, Cleve and Alex, the youngest, who take the family name, Thomas, of their mother. In speaking of his incarceration, Willie says, “Alabama took away my name.”

In a transition never examined, the family migrates north, and Alex is raised around Albany, N.Y. Actor Thomas likes to portray the wide-eyed, guileless Alex, often juxtaposed with a tough-talking adult. The child Alex looks forward to a bus ride that will return the family to the South and another city named Albany, this one in Georgia. He marvels at the magnificence of a public toilet in a bus station and then encounters segregation, “Colored Only,” for the first time. Tendentiousness is not his point. Instead, the playwright is reminding us that he never suffered that daily brutality his father endured as routine. It allows him to aspire.

Even in the North, some of Willie’s self-hatred descends to his children. Sammy drifts into hard drugs and chaos. For Jesse it is unrewarding petty crime. These brothers are not examined closely but instead are seen as bullies tormenting the sensitive third brother, Cleve. If one were to tape-record Throw Pitchfork it would show more time devoted to Cleve — never Cleveland — than Alex, the author. He’s the one who overthrows Willie’s heritage of violence and failure.

It is the task of Alex Thomas the actor to portray young Cleve as a clear head in an uncongenial environment. Not a sissy, but different. He likes to read and behaves in school, even when teachers refuse to recognize his name. Sammy, Jesse and others think such behavior is acting white or, worse, looking queer. Eventually, long before gay rights support groups existed, Cleve comes out and stands up for himself.

In his subtlest portrayals actor Alex Thomas depicts himself and the youthful Cleve in conversation. The aspiring actor is becoming careful about diction and pronunciation, but the gay brother is just a measure more precise and confident. We always know who is whom.

Sara Lampert Hoover proves a deft director in handing playwright Thomas’ language, which feels like James Joyce meets Def Poetry Jam. She keeps actor Thomas in motion on the bare set by Tyler M. Perry, almost like a tennis player volleying for all parts of the court. This impressive production of Throw Pitchfork explains why Alexander Thomas is one of the Kitchen Theatre’s favorite actor-playwrights.