Will County Executive Joanie Mahoney keep her campaign promises in her third term?

A funny thing happened on the way to Election Day. In the race for Onondaga County Executive between incumbent Joanie Mahoney and challenger Tobey Shelley, the Syracuse New Times unexpectedly became part of the story. A pretty big part of the story, actually.
For starters, here’s a dirty little secret that reporters will only tell you off the record — covering politicians when they are running for office is really boring.

Not that the people themselves are boring, or bad people. It’s that the campaigning comes down to this: Spend all day talking about one thing — yourself — and spend all night begging for money. Is this the description of a person you’d like to hang out with? 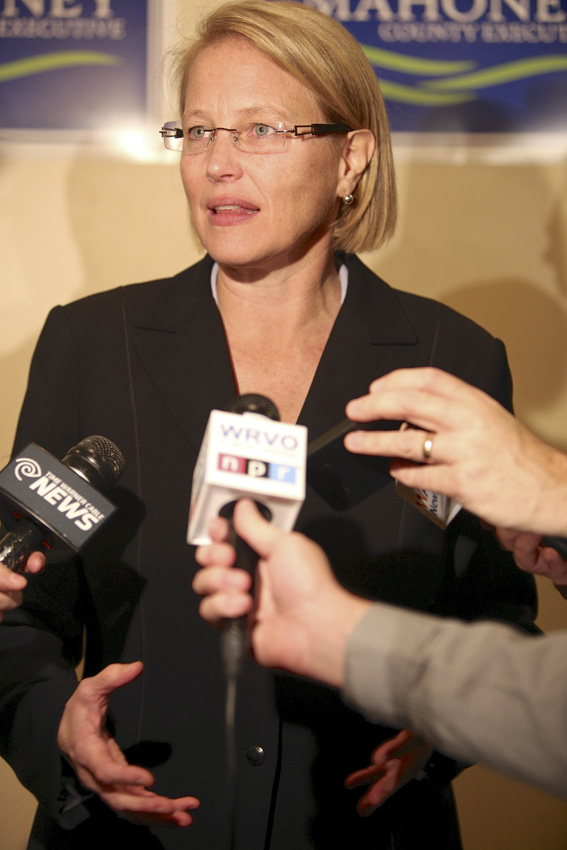 During campaigns, candidates who may be fine people, even fun people to hang with, become obsessed with themselves and with winning. Politicians tend to see every single thing that happens through one lens: Does this help me or does it help the other guy (or gal)?

In the heat of a campaign, any time a reporter asks a hard question of a candidate, the typical reaction is to assume that the reporter is working for the other side. In point of fact, we ask questions so we can get answers.

So then this thing happens. One day we notice that the year is 2015. Two big things to note in the political world. 1. We have a highly polarized electorate nationwide, but here in Onondaga County, a moderate electorate that cares less and less about party lines. Our region, New York’s 24th Congressional District, has bounced back and forth between the Democrats and the Republicans in each of the last five elections. 2. Racial and class tensions are at the center of our national political debate, on every front from Black Lives Matter to Donald Trump’s Mexican border wall, to the Syracuse city schools.

With that in mind, we asked Mahoney some questions, and Shelley some questions. Shelley was the candidate who lost the sheriff’s election last year and decided to challenge Mahoney this year. In doing so he ensured the voters that we would at least have a choice, unlike in 2011, when Mahoney won her second term with no opposition.

I interviewed both Mahoney and Shelley with a focus on the racial, economic and social divide that characterizes life in Onondaga County. The evidence of this is so widespread that, like a gray sky in January, most of us don’t notice it anymore.

Go visit a suburban school and then stop in at Dr. King or Corcoran. Take a smooth ride on Interstate 481 up to Oswego and then try to make it down Midland Avenue without swerving to avoid a pothole. Cruise the selection of ready-to-go dinners at Wegmans in DeWitt and then try to find a fresh vegetable at any shop on South Avenue. The truth is that we are so segregated that it takes a genuine effort to see both sides of the divide.

So the interviews were undertaken with a clear bias. It wasn’t a party bias. The goal was to find out what these candidates, with their unusual party affiliations and coalitions, were thinking of doing for a county which, at the risk of offending, looks increasingly like a 21st-century version of apartheid. We wear with pride our title as snowiest city in America; we would rather look away from our other title as the city with the highest concentration of poverty among minorities anywhere in America. (If you have the stomach, read Paul Jargowsky’s damning study, “The Architecture of Segregation,” on the links between this growing poverty and racial unrest.)

Shelley was in an unusual position, running on both the Conservative and Democratic Party lines. For the June 10 Sanity Fair column entitled “Toby Shelley’s Conservative Context,” I asked him how that worked, and probed some of the contradictions between the two parties.

We got to the topic of racial profiling, and Shelley pronounced himself in opposition to racial profiling. Then he went on to say the thing that, to quote The Post-Standard’s editorial just before Election Day, “Try as he might, he cannot outrun.” 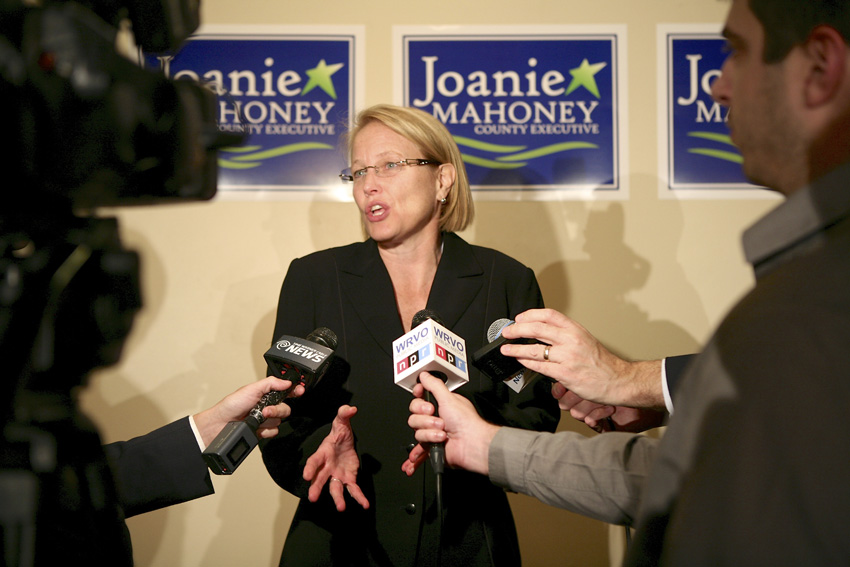 Here is the quote that Shelley could not outrun: “For example, out in Marcellus, a community that is mostly Caucasian, if you see someone who looks different, you might just stop and talk to them, ask how they’re doing.”

The column produced little public reaction until a couple of days later, when Shelley lashed out at the Syracuse New Times, and threatened to sue the paper for “slander.” Importantly, he did not dispute the accuracy of the reporting. That outburst drew the attention of the county’s Democratic Committee, which called him into a meeting and gave him a chance to explain his statement.

Seems the meeting didn’t go too well. The committee took the unprecedented step of pulling its endorsement.

Shelley’s people were apoplectic. They stopped sending press releases to the Syracuse New Times. (This wounded us greatly, but we managed to find them on Facebook.) They posted glowing testimonials insisting that Shelley was a good person and not a racist. But they never challenged the fact that he said what he said. We never said that Shelley was a bad person either, but his statement about profiling offered a window into his thinking, and the voters had a right to know that.

Things got really strange in late summer. Shelley never missed an opportunity to blame the Syracuse New Times for his troubles, often telling supporters that we were doing Mahoney’s bidding. His campaign manager, Tom Newton, filed 13 Freedom of Information requests with the county comptroller’s office, including requests for information on any and all projects associated with the paper or this reporter.

In a nutshell, he was hoping to make the case that Mahoney had bribed Syracuse New Times publisher Bill Brod and myself because we had our parking lots paved using funding from Onondaga County’s Save the Rain projects. He didn’t find much (most of what he asked for is already on the county’s website), and they never launched the attack that he had been telling people was coming. Instead Shelley’s campaign consisted largely of a Facebook page and a booth on Saturdays at the Regional Market.

The slap from the Democratic Committee forced Shelley to carry his own petitions to get on the ballot, which he did, and he won the Democratic nomination. He also won the Conservative line in a primary, in spite of Mahoney’s meddling in the affairs of a party whose endorsement she refuses even to seek. The two-term county exec, with a bankroll of more than $800,000 compared to Shelley’s $1,500, still felt the need to promote the candidacy of an obscure fellow, Oscar Peterson, to oppose Shelley.

Shelley won that race handily and the Conservatives came out in force to support him in the general election. On Nov. 3, nearly a third of Shelley’s votes came from the Conservative line. Still, it wasn’t enough and Mahoney rode to a third term with 60 percent of the vote.
Meanwhile, Mahoney’s own very dramatic comments on race attracted far less attention. She actually made some rather serious commitments, which she continues to endorse. If she follows up, this could be a very different place to live.

She will take her oath for the third time as a public discussion begins on creating a municipal government. Mahoney may be a Republican with her heart in the city where she was born and raised (she often refers to the county as a town), but many of the voters and donors who put her in office have other ideas.

The twin commitments she made in that interview were lofty ideals. (See the June 3 Sanity Fair column, “Blurred Lines.”) She pledged to do something to tear down the wall that exists between the Syracuse City School District and the rest of the county’s schools.

It’s no secret that the city schools are failing, and a big reason is the flight of so many middle class families to suburban districts and private schools. These districts offer greater opportunities; they are also much more homogeneous, mostly white.

Mahoney doesn’t seem to want to hide from this. She says that we have to explore ways to unite the school districts so that educational opportunity is more equally shared. 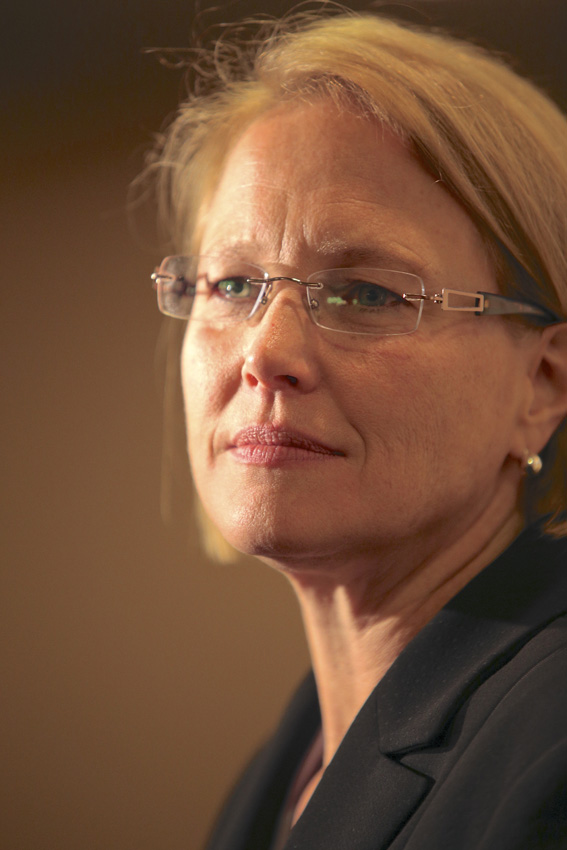 Many local politicians will say that they know that we need some form of a combined city/suburban school district. City of Syracuse Mayor Stephanie Miner has said it’s a good idea but a political non-starter. No one, until now, has said that they would like to work to make it happen.

Mahoney prides herself on being the county executive who gets things done: the Lakeview Amphitheater, the doggie rescue, the change to the sales tax formula, paving city streets with county dollars. Whether you like them or not, these were changes she made, and she made them happen quickly. Can she find a way to unite our schools around an agenda of a quality education for all? That would make the amphitheater seem like a dip in the lake.

Mahoney also vowed in her interview to do whatever she can to “bring back the black middle class.” That’s very unusual language for a Republican county executive, but Mahoney spoke frequently and sometimes emotionally about how many educated African Americans, some of them her friends and classmates, abandon the area. Many are seeking opportunity elsewhere but also say they are fleeing the persistent racism of our town. She is not the first person to lament that many young people in the black community feel that to succeed they need to get out of town, but she may be the first white politician to say it out loud.

On election night she spoke of the great opportunities awaiting “this town” as we leave behind the legacy of a polluted Rust Belt city. The question she faces is: How can those opportunities be made real for all of us? Now it’s time to see if Joanie Mahoney was all talk, or if she will stand and deliver.