After a season that ended in March Sadness instead of March Madness, fans of the Syracuse University basketball team can at least look forward to the possibility that the Orange will return to the NCAA Tournament next March.

But it won’t be easy.

This season’s edition of the Orange is down to nine scholarship players, including three freshmen, and facing a challenging schedule. And Hall of Fame coach Jim Boeheim is suspended by the NCAA for the first nine Atlantic Coast Conference games (unless he wins an appeal and the suspension is reduced). No wonder the Orange is nowhere to be found in the preseason polls, and was picked to finish ninth in the ACC in the ACC Media Poll.

“Every year’s new and every team is different so it really doesn’t matter about expectations and ratings,” said Boeheim, who is entering his 40th year as SU’s coach. “We haven’t been (highly) rated before and had very successful years in more years than one. Just look forward and see what we do to be a better team this year.”

Certainly Boeheim does not want to look back at last season, which started under the cloud of an NCAA investigation and ended with a self-imposed postseason ban and unprecedented NCAA penalties. To recap: Following a multiyear investigation into SU’s athletic program, the NCAA suspended Boeheim for nine ACC games, took away 12 scholarships (three a year for four years), and ordered 108 wins vacated from the basketball records, dropping Boeheim’s win total from 966 (second all-time) to 858 (sixth all-time).

The 94-page report by the NCAA Committee on Infractions said the violations, which dated to 2001 and were self-reported by Syracuse, involved academic misconduct, extra benefits, failure to follow the school’s drug-testing policy, and impermissible booster activity. Boeheim and SU asked for a reduction of their penalties in hearings before the NCAA’s Infractions Appeals Committee, so that will be a major storyline as this season plays out.

As the Orange prepares for the 7 p.m. season opener on Friday, Nov. 13, against Lehigh University at the Carrier Dome, here are five key questions about this year’s team as it seeks to return to the NCAA Tournament:

Is There Enough Depth? In some years, Boeheim went only seven deep, so having only nine scholarship players is not necessarily a problem. 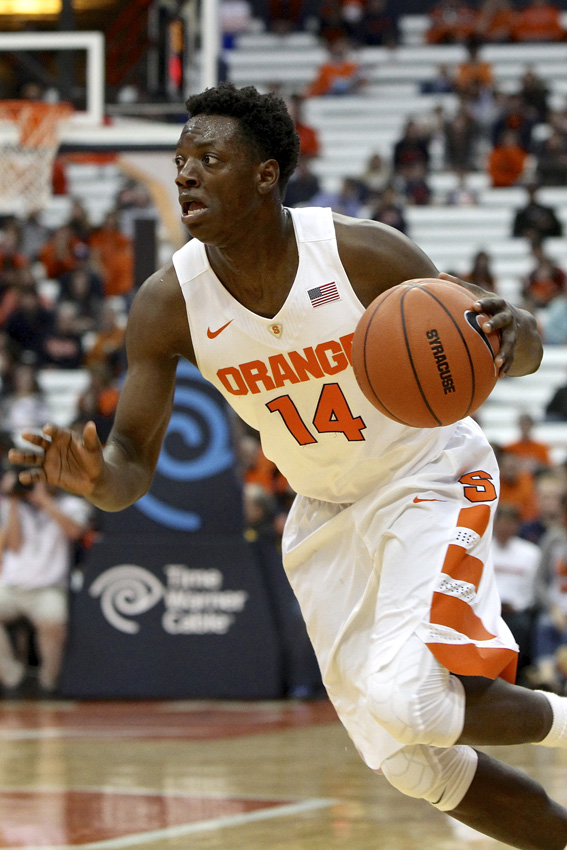 But one of those players, junior center Dajuan Coleman, has appeared in only 37 games the past three years because of major knee injuries. Another one, sophomore point guard Kaleb Joseph, went from a starting job to Boeheim’s doghouse last season. And a third player, junior Chinonso Obokoh, is from Nigeria and still learning what it takes to play at the Division I level.

In case you’re wondering about the other players, guard Ron Patterson and forward B.J. Johnson transferred after last season, incoming freshman big man Moustapha Diagne didn’t enroll because of an eligibility issue, and 7-foot-2 center Paschal Chukwa must sit out this season after transferring from Providence.

All of which makes it imperative that the three freshmen — starting small forward Malachi Richardson, backup guard Frank Howard and backup forward Tyler Lydon — contribute from the get-go. This is a talented group: Remember when Boeheim called this recruiting class one of the best he has ever had? 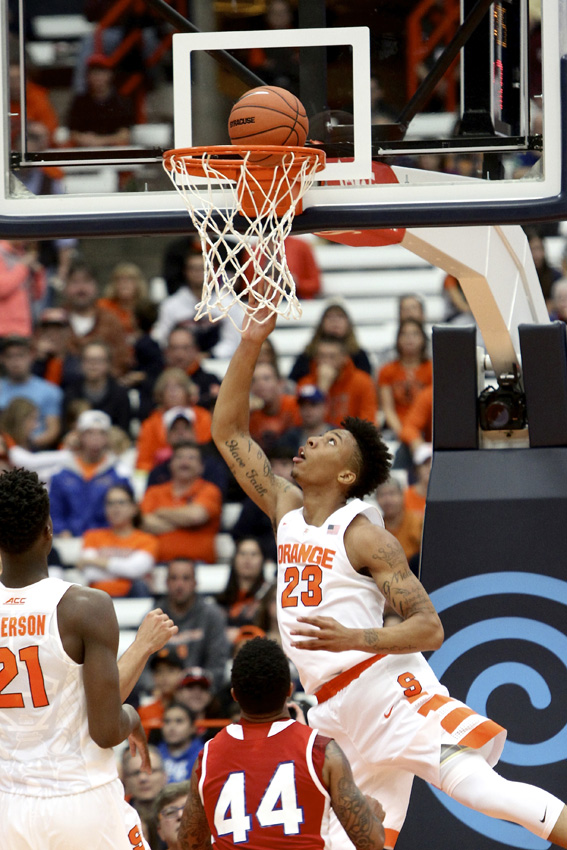 “Honestly, I’m impressed with all three of them,” said junior power forward Tyler Roberson. “I’ve played with (Malachi) Richardson in high school so I knew he was a good player already. But Tyler (Lydon) and Frank (Howard) are good players, too. So I think they’ll all be able to contribute.”

Will Coleman Hold Up? Without Diagne, Obokoh is the only other true big man besides the 6-foot-9, 255-pound Coleman. The Orange will not be able to absorb Coleman’s loss this season the way they did in previous years when Rakeem Christmas, Baye Moussa Keita and Chris McCullough were on the roster.

Boeheim said Coleman hasn’t missed any time in practice and predicted Coleman would be “one of the premier shot blockers in college basketball.” In SU’s easy exhibition wins against Division II teams Le Moyne and Florida Southern, Coleman scored 22 points and grabbed 14 rebounds in 44 minutes.

“Obviously, if you don’t play in two years you’re going to be a little rusty, but he’s up and down the court,” Boeheim said. “We haven’t rested him. We haven’t changed anything. We haven’t made anything easy. He’s in at practice every day, full speed.” 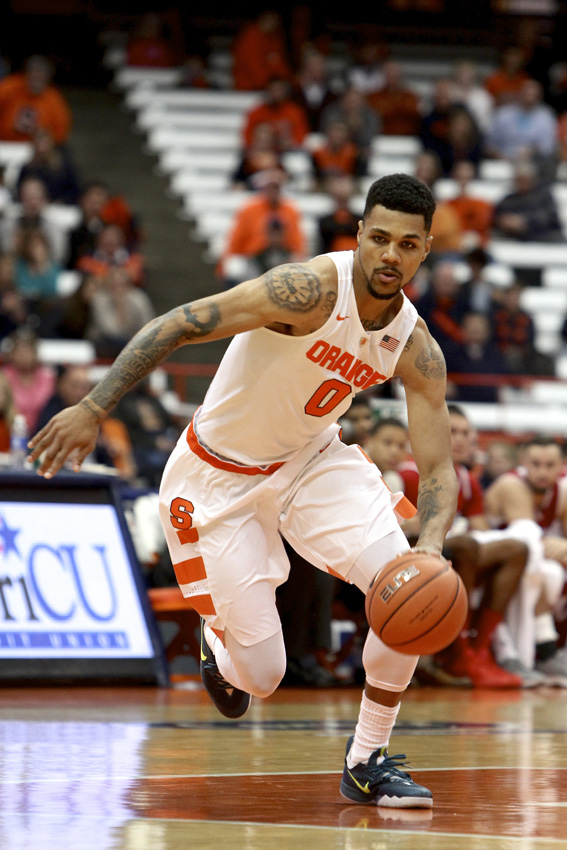 How Will Gbinije Handle the Point? Graduate senior guard Michael Gbinije started last season as SU’s sixth man and ended it as the Orange’s starting point guard as Boeheim lost confidence in Joseph. It appears Gbinije will be the primary point guard this year, although Joseph has looked much better and Gbinije can also play shooting guard and small forward.

Last season, Gbinije led the team in assists (3.6 per game) and ranked third in scoring (12.7 points per game). In the games against Le Moyne and Florida Southern, he led the Orange with 35 points on 11-for-21 shooting with nine assists and four turnovers.

Gbinije will team with graduate senior shooting guard Trevor Cooney (13.4 points per game last season) to form a veteran backcourt that will serve as the focal point of a perimeter-based offense that will rely heavily on 3-pointers. Against Le Moyne and Florida Southern, the Orange shot 43 percent from 3-point range (26-for-61).

Can They Win Enough Games to Make the NCAA Tournament? The Orange can be very good this year and still not win 20 games, which usually guarantees a NCAA Tournament bid.

SU’s non-conference schedule includes Connecticut or Michigan and perhaps Gonzaga in the Battle 4 Atlantis Thanksgiving tournament in the Bahamas; Wisconsin at the Dome in the Big Ten-ACC Challenge Dec. 2; and old nemesis Georgetown on the road Dec. 5. The ACC schedule includes road games against six of the top seven teams in the Media Poll.

“So we’re playing four of the top five or six teams in the league on the road,” Boeheim said at ACC Media Day, referring to North Carolina, Virginia, Duke and Louisville. “That could mean the difference between 10-8 and 9-9 or 7-11 instead of 10-8.” 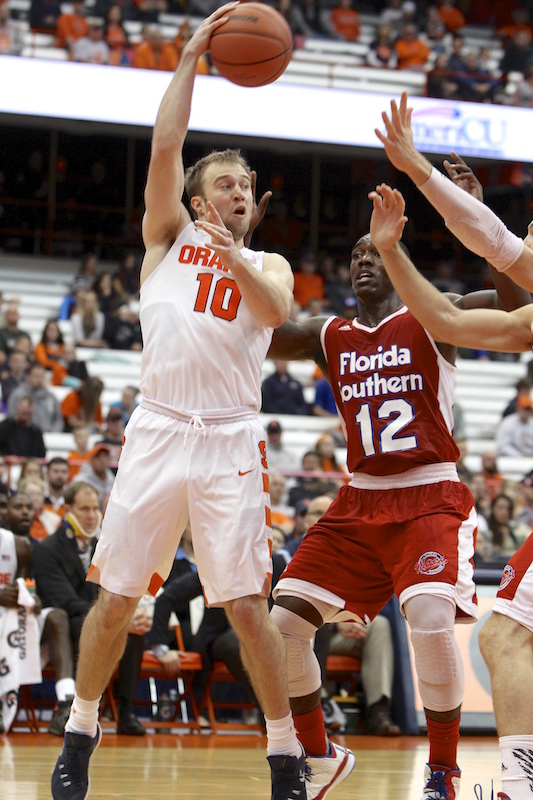 What Will Be the Impact of Boeheim’s Suspension? Unless Boeheim wins his appeal, he’ll miss the first half of the ACC schedule that includes road games at Pittsburgh, Miami, Wake Forest, Duke and Virginia, and home games against Clemson, North Carolina, Boston College and Notre Dame. Boeheim said at ACC Media Day that if the Orange falters during his absence, it won’t be assistant coach Mike Hopkins’ fault.

Judging from preseason predictions, many college basketball observers around the country are expecting the Orange to be so-so with or without Boeheim. For their part, the SU players enjoy the prospect of proving them wrong.

“Flying under the radar is definitely fine with me,” Cooney said. “We have a lot of good games and a lot of opportunities to beat a lot of great teams. I think this team can be just as good as our teams in the past that have been successful.”