So many of us are becoming “cord cutters,” cancelling our cable subscriptions in favor of streaming services

“Aereo.” It’s a word we TV- and tech-types have heard and said a lot in the last few days, and even if you’re not tuned in to TV or tech news, you’ve probably seen the name whiz by in your news feed. But what is it? An aeroplane over Rio? An aerobic stereo? An aerialist on a paleo diet? Maybe!

For our current purpose, Aereo is a NYC-based company that provides subscribers with the ability to view broadcast content online, either live or time-shifted. For $8-12 per month, each subscriber has access to their own remote antenna and the technology that converts the signal to digital. It’s like those aluminum-covered bunny ears folks have used for eons to capture broadcast signals, except it’s the size of a dime and it lives in a warehouse in Brooklyn.

Here’s how it works: it’s 8:55 pm on a Thursday night, and I decide that I want to watch Scandal. Rats! I don’t have cable! Never fear, all I have to do is call up Aereo’s website and tell my very own dedicated antenna what I want. It captures the signal, digitizes it, and begins to save it (live) on a hard drive that also belongs to me. As soon as the download begins, the stream begins, and by 9:01 pm, I’m yelling at Fitz to my heart’s content.

Subscribers could watch TV on their laptops, tablets, or smart phones, no matter where they were. As of Saturday, Aereo’s services were suspended for the foreseeable future. 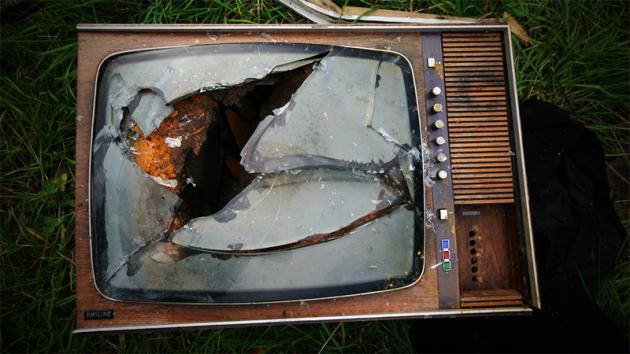 So many of us are becoming “cord cutters,” cancelling our cable subscriptions…

After a two-year battle with the broadcast industry, the Supreme Court held on Wednesday that the company violates the Copyright Act by “performing” copyrighted works for “the public.” Basing their decision on precedent set in decisions about the cable industry in the 1970s, SCOTUS decreed that you simply can’t take content off of the airwaves, digitize it, and send it to the masses over the Internet. You’re violating the broadcasters’ “exclusive right” to do the same, since they own the content.

Broadcasters, led by ABC, brought this suit with much gusto and hyperbole, implying that Aereo and services like it aim and threaten to destroy the television industry as we know it. I hate to break it to you, broadcasters, but the end is nigh no matter what. As I mentioned a few weeks ago, the future of television is online.

So many of us are becoming “cord cutters,” cancelling our cable subscriptions in favor of streaming services like Netflix, Hulu, and Amazon Prime. Services like Aereo introduce a new element, streaming previously untouchable broadcast content via the Internet. Sure, you can watch a few free episodes here or there on CBS.com or ABC.com, but for full access – especially live access – you have to be a cable subscriber. Aereo, along with its contemporaries like Mohu and Simple.TV are answering the call for easier and cheaper access.

Aereo’s problem lies in the fact that it re-transmitted the content without a proper license – a big copyright no-no. It’s important to think of the content creators here; none of the money Aereo subscribers paid went to reward the creative folks behind the shows. Not cool.

The good news is that Wednesday’s decision was narrowly conceived. The justices explicitly noted that they hoped the decision would not hamper development of similar technology.

Mohu, a company based in Raleigh, NC, puts HD antennas in customers’ homes, bypassing that whole “transmission to the public” snag. CEO Mark Buff seems to be taking shameless advantage of the publicity surrounding this decision, but at least his business model doesn’t violate the law.

No matter how much you love or hate your cable provider, it’s important to remember the creatives. Whenever you consider pirating or sidestepping proper payment for content, think of who (besides your cable company) you might be shorting – not just with your subscriber money, but with your viewership. Watching shows you love through legitimate, ratings-measured channels helps to keep those shows alive and supported by their distribution channels.

The future of distribution is online, for certain, and hopefully it will be much more open sourced. Cable and broadcast companies need to come to terms with that. But as viewers, it is also our responsibility to support the writers, actors, directors, cameramen, gaffers, and set dressers we love. I’m all about digital. Moving forward from Aereo, let’s do digital the right way.

Fox is on a roll with comedies. For lovers of the irreverent, relevant, laugh out loud sitcom genre, Fox has brought us New Girl, Brooklyn Nine-Nine and The Mindy Project in just the last few years. Long ago there was That ‘70s Show and, of course, Arrested Development. This fall, they’re rebooting a sort of Seinfeld for a new generation, with Mulaney.

John Mulaney is a struggling comic (sound familiar yet?) with some weird friends (Nasim Pedrad, Zack Pearlman) who gets his first big break when he’s hired by an Emmy-winning comedian (Martin Short). Mulaney was created and is played by none other than Saturday Night Live writer John Mulaney. The pilot was ordered by NBC way back in the spring of 2013, but they didn’t pick it up – probably because they figured, “Seinfeld? Again? Eh.” Regardless, it looks to be worth a try if you’re into zoning out and chuckling at some stupid situational humor.

Airing this fall on FOX.