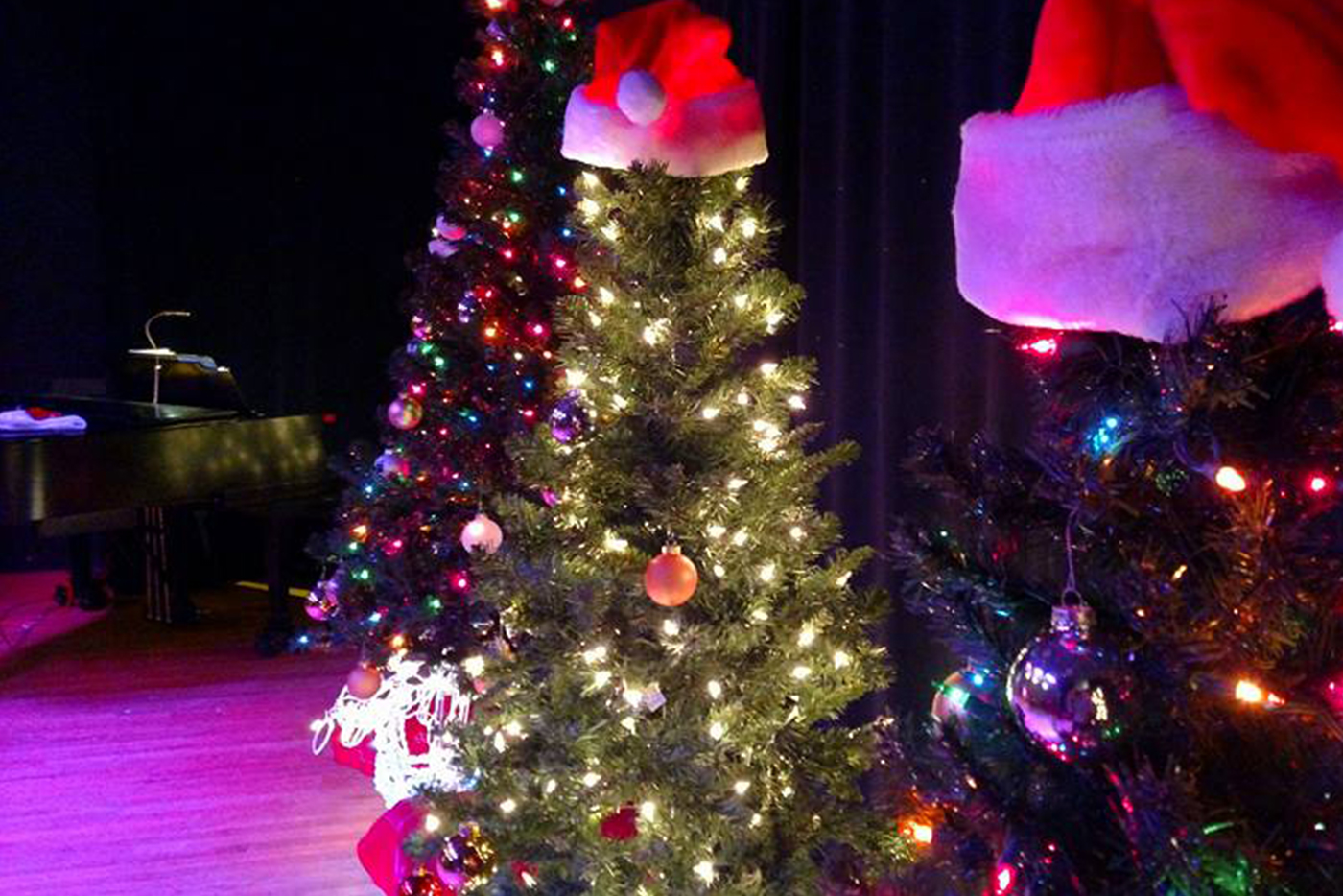 No spoofs. No satire. No cynicism. We count on Rarely Done Productions to surprise us. It’s the edgiest company in town, used to pushing the limits. It once gave us tough-talking reindeer in a December show.

Company head Dan Tursi resists being put in a small box, however; he also has a sweet side and a flair for children’s theater. So for this really stressful holiday, when the alt-right looks to be taking over the government, Rarely Done offers us comfort food. A Christmas Survival Guide, a cabaret of about 20 songs and skits running through Dec. 17 at Jazz Central, 441 E. Washington St., just wants us to relax and smile.

The show was put together by James Hindman (who also composed the period cabaret Pete’n’Keely) and Ray Roderick, with music arranged by John Glaudin. Christmas tends to favor the familiar, such as The Nutcracker, and inevitably we will know some of the music here.

But in the first skit with spoken dialogue, Julia Berger disparages all those Christmas clichés. Much of the recurrent musical numbers are unfamiliar, like the forgotten Kay Starr hit, “Everybody’s Waitin’ for the Man With the Bag.”

The cast consists mostly of company regulars, including Colleen Wager, Sunny Hernandez, Peter Irwin and Jimmy Curtin, plus bearded Tony Kenneson, who has just moved here from Wales. Wager is most often called upon to sing the blues, because this show would not be a “Survival Guide” without recognizing that the holidays are reminders of deep loss for some people. Wager’s numbers, like “Christmas Eve” and “Little Girl Blue,” sung while wearing a black dress, are the cabaret’s most plangent moments. These are songs to get you through the night.

Along with those blues, many among us dread invitations to Christmas parties, and it’s not just the clam dip. It’s also the bogus gaiety and the noise. Survival Guide allows you to own up to those regrets. In an early number, for example, Peter Irwin starts to warble “Silver Bells,” only to be interrupted by a ringing cell phone.

Santa Claus comes in for much ribbing. Jimmy Curtin signs on as a department store Santa in a song about seasonal employment. He catches heat for pulling in only $10 an hour for being jolly on command. In the evening’s funniest skit, Curtin’s Santa deals with the gift list of a disagreeable adult (Julia Berger), who admits that she can be aggressive and has a hard time retaining friends. Accommodatingly, he asks her to sit on his lap, where she asks for a flush to her septic tank. Then she announces she has more immediate needs: someone to be her date for a Christmas dance.

More comedy routines are handled by Sunny Hernandez, like her vamp song with a Marlene Dietrich accent for the therapy-centered “Twelve Steps of Christmas,” which includes karate lessons. In the second act, Curtin, Hernandez and Berger sing the lyrics to Leroy Anderson’s “Sleigh Ride, while sporting antlers and holding their wrists inverted like reindeer.

We feel the tone changing when Jeff Unaitis, busy at the keyboard all evening, rises to answer the question if Christmas has an original meaning by reciting the Nativity sequence from the Gospel of Luke. It’s the same passage that Charles Schulz inserted into the original 1965 TV cartoon A Charlie Brown Christmas.

Wager, Irwin and Berger follow with the sacred trio of “Amazing Grace,” “Baby Jesus” and “Away in a Manger.” Tony Kenneson’s powerful “O Holy Night,” with the rest of the crew in choir robes, would fit well in many churches. And the finale is a quotation of Handel’s Messiah.

Mike Powell: Back on Track
Life And Near-Death In Bedford Falls
To Top